The global oil and gas industry has begun its second year of recovery, but capital spending only climbed last year by about half as much as originally budgeted, and it is poised to surge this year, according to a survey by Raymond James & Associates Inc. 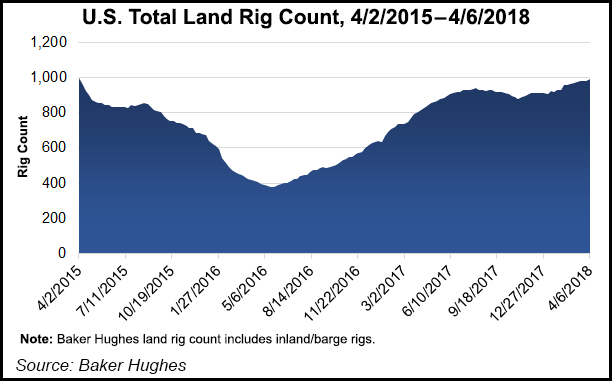 Exploration and production (E&P) companies worldwide took a hammer to their investments following the oil price slide in 2014, resulting in “austerity of unprecedented proportions,” said analysts Pavel Molchanov, J. Marshall Adkins, John Freeman and Praveen Narra. The team had predicted last year that 2017 global oil and gas capital expenditures (capex) would increase by more than 10%, led by an expected 50%-plus increase in U.S. public E&P spending.

However, based on a recently finalized capex survey, which encompasses about 70% of global upstream oilfield investment, “it now appears that 2017 public company global oilfield spending rose by a smaller-than-expected 5%,” analysts said. “With the recent surge in oil prices, 2018 global budgets are now projecting a 12% increase in global oil and gas spending.”

Unlike last year, when U.S.-centric E&Ps led the global spending recovery with a 52% surge in capex, this year appears to be more evenly distributed, with the large E&Ps following through on their promises to instill capital discipline.

“The big picture is that global spending is still down by nearly half from peak 2013 levels, and sustaining global oil supply growth will ultimately require further spending recovery, an uncertain prospect as more management teams take a cautious approach to capital allocation,” said the Raymond James team.

Even with an estimated 50% jump in cash flows last year, U.S. E&Ps overall only plan to raise 2018 spend by around 12%. The focus on free cash flow and the value over volume mantra isn’t “just lip service — it is actually showing up in early budgets,” said the analysts.

If oil prices were to remain in the mid-$60s, there also may be room to raise capex through the year, since many budgets were set on an oil price forecast in the mid-$50s.

The Raymond James survey is not exact, as it only captures the publicly traded E&Ps in the United States, around 40% of the spend. Not included is spending by private operators and the majors/national oil companies.

“When we look at overall U.S. oilfield spending in 2018, we still expect a much more robust 40% increase in overall spending backed by a 60% increase in industry cash flows,” said the Raymond James team.

Using a “top down” analysis, capex estimates are based on oil prices, overall production and industry cash flow generation. A key assumption is that U.S. producers overall spend at least as much cash as they generate, and often more. “For the past two decades, this has been a very good assumption,” the Raymond James team said.

Based on the firm’s 2018 price deck, which is forecasting average West Texas Intermediate oil prices of $65/bbl, U.S. E&P cash flow generation should increase by around 60%, with capex up around 40% and the U.S. rig count increasing by 25% or higher.

Unlike 2017, when five of the 18 public companies in the survey’s U.S. subset more than doubled spending, none of the domestic E&Ps expect to increase capex by more than 100%, and only Permian Basin-focused Diamondback Energy Inc. is above 50%, according to Raymond James.

Following a series of recent meetings with U.S. E&Ps, Jefferies LLC analysts said the U.S. land rig count would eclipse 1,000 by the end of June. As a matter of fact, Baker Hughes Inc.’s weekly rig count issued last Friday showed that the United States ended the week at 1,003 active oil rigs, while the natural gas-directed rigs finished flat week/week at 194. The latest count marked the first time the domestic tally has surpassed the 1,000-rig mark since April 2015.

“We sensed that reloaded operator budgets have created enough demand visibility to allow for the U.S. land rig count to steadily rise above 1,000 in the second quarter,” Jefferies analysts said of their meetings. “We also sensed that land drillers are more willing to sign one-to-two year term contracts at current leading edge dayrates in a bid to lock in steady margins…

“Interestingly, E&Ps appeared a little surprised at the pace of total rig count growth, and we heard at least one example of concern that service costs could be higher than budgeted for if the rig count materially exceeds 1,000.”

Cacchione pegged incremental capex for the U.S. E&P group at $2.3 billion this year, which leaves more than $22 billion in incremental free cash flow. A lot of cash is being returned to shareholders.

“We counted nearly $7 billion in new share repurchases, as well as another $710 million in newly announced dividend gains,” Cacchione said. “Part of the remaining free cash flow will be used to reduce some of the $184 billion in debt that remained outstanding at the end of 2017.”

“Altogether, these oil producers are only allocating an additional $2.1 billion — less than one-sixth of the $13.6 billion in additional cash flow — to increased capital expenditures, resulting in a modest 9% boost in 2018 capex,” he said. “The remaining $11.5 billion in free cash flow will be reserved for strengthening balance sheets and rewarding shareholders through higher dividends and share buybacks.

“That’s noteworthy for an energy sector renowned for its financial profligacy in the emergence from downcycles over the last three decades.”

According to Cacchione’s calculations, oil-weighted domestic E&Ps plan to allocate more than half (55%) of 2018 capex to the Permian Basin, 13% to the Eagle Ford Shale and 9% to the Bakken Shale, with the remainder across other assets. Last year about 52% of total capex was allocated to the Permian and 12% to the Eagle Ford, while the Bakken also was at 9%. Capex in Oklahoma’s myriad reservoirs is seen declining to 2% of total spend, down from 3% in 2017.

It’s no surprise that most of the funds continue to West Texas and southeastern New Mexico, an area that is the most active for rigs and production.

“The Permian remains the center of the E&P and broader U.S. energy investment universe,” said the Jefferies team. “The depth of inventory at the low-end of the cost curve should continue to attract investment in upstream, midstream, and services,” offering operators “a differentiated growth, return and free cash profile relative to the other opportunities in shale.”