U.S. producers are looking past 2016, particularly on the pricing side, and they appear “surprisingly” bullish about the natural gas price outlook for 2017, which may be in part because only 30 rigs or so are in operation in the Marcellus Shale, analysts said Monday. 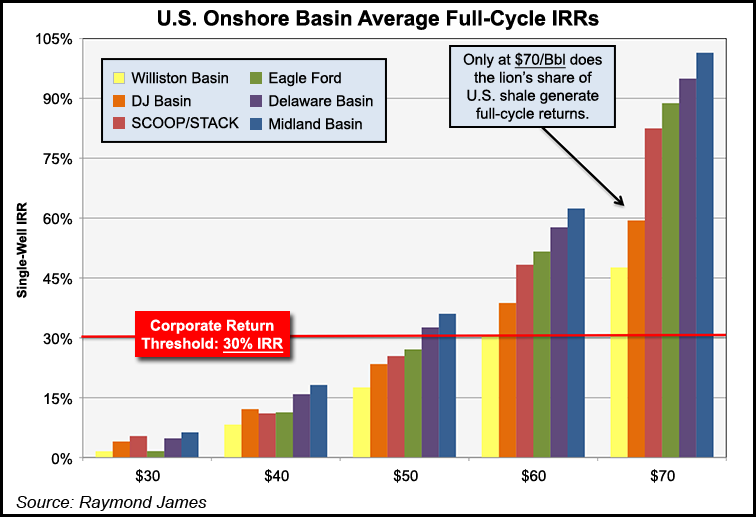 To the analysts with Raymond James & Associates Inc., the bullish view on gas prices for 2017 was unexpected. Analysts call for an average 2017 Henry Hub price of $2.65/MMBtu, but that appears “increasingly bearish relative to consensus as market participants are seemingly calling for larger natural gas production declines than we anticipate,” wrote analysts Kevin Smith, J. Marshall Adkins and Garrison Allen.

“Maybe it was the fact that New York was still seeing 40 degree weather in early April, or more likely the fact that only 30 rigs are operating in the Marcellus, but one of our unexpected takeaways from the IPAA conference was the incrementally bullish tone on natural gas prices for 2017 on the part of investors and management teams alike,” Smith and company said.

The reasons for the heightened interest is twofold. Investors are looking at liquidating their drilled but uncompleted wells, or DUCs inventory, in the Marcellus, which is rising by around 200/month. That should result in a “tougher treadmill” going into next year as producers would need to begin drilling again to maintain gas output. Concerns also abound about delays in Marcellus pipeline takeaway projects like Constitution Pipeline Co. LLC’s proposed gasline, which has been pushed back from 4Q2016 to late 2017 (see Shale Daily, March 10).

“In sum, various investors/managements teams spoke of a possible year/year (y/y) decline in U.S. natural gas production as great as 5-8 Bcf/d,” Smith and his colleagues said. “For the record, that is significantly more bullish than our model, which shows 2017 y/y production declines between 1 and 2 Bcf/d” (see Daily GPI, March 14). However, the Raymond James team remains in the camp that a slowdown in takeaway capacity could limit near-term Marcellus production growth.

“Besides midstream operators electing to delay pipeline activity, one of the overarching concerns is New York State’s willingness to approve pipeline projects in its state. The continual string of regulatory road bumps plaguing pipeline projects slated to burrow through the Empire State add another layer of bullishness to 2017 gas sentiment.”

Pipeline projects that had been scheduled to begin service later this year are being moved back to late 2017, and persistent pipeline constraints should hamper efforts to take gas out of Pennsylvania — thus keeping a ceiling on capital spending in the near-term and limiting supply growth.

Besides gas, the OGIS made clear that the exploration and production (E&P) industry is going to have to go through a multi-year deleveraging cycle, said the Raymond James analysts. Many companies suggested that the oil price needed to be higher than $60/bbl to incentivize drilling activity higher than consensus expectations. Operators also “seem keen to add hedges” for the last half of 2016 at around $50/bbl.

“Given that most E&P balance sheets in the industry are relatively stretched, combined with the heavy presence of commercial bankers, debt clearly was the single most discussed topic at the conference.” Now in the middle of spring redetermination season, most borrowing bases are declining in line with expectations, down 20-30%.

Counter to the consensus logic that the E&P drilling activity will ramp up at $50/bbl oil, the prevailing view at the conference was that industry activity needs a higher oil price to delever to a lower level than previously expected, effectively limiting drilling activity until balance sheets improve.

Raymond James analysts also looked at full-cycle returns to guide at what price rigs would go back to work — and where they would start. The Permian Basin offers the best investment rate of return, but beyond the West Texas play, it’s likely that E&PS need a price of $60-70/bbl West Texas Intermediate to begin raising rigs, according to Raymond James. That’s the “line of demarcation for full-cycle returns…and the level at which many management teams are likely to meaningfully increase drilling activity.”

Jason Wangler of Wunderlich Securities Inc. also shared his observations, and like his peers, he said liquidity and balance sheets were the big investment focus last week. “Additionally, growth and spending are muted (if not gone) for most companies, as balance sheet strength is now a bigger driver than production growth in the oversupplied market.” Clarity into 2017 “is a big deal,” he said.

“It seems that most everyone knows 2016 is going to be a tough year for the energy space and as such, many are looking for clarity in the following year to gauge investments.” In addition, oilfield service companies remain under pressure both on utilization and pricing.

“Obviously,” said Wangler, “the rig count remains at all-time lows and will likely head even lower in the coming weeks, which puts utilization in a bad spot and pricing pressures remains in a space where margin is already hard to find.”