As Lower 48 natural gas and oil producers signal cutbacks to spending and activity, the latest data on permitting indicates operators already are “clearly retreating” in the wake of a devastating decline in oil prices and the effects of the Covid-19 pandemic. 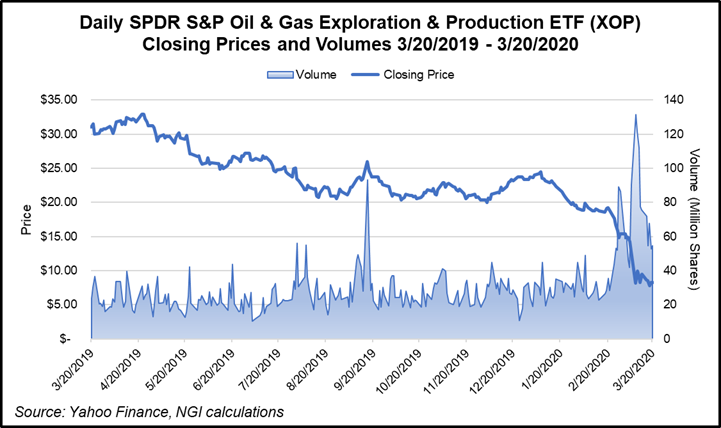 Evercore ISI’s analyst team led by James West on Friday said onshore permitting for the week ended March 13 slumped by 19% from the week earlier, “the second lowest weekly count so far this year.”

Most of the decline related to fewer wells permitted in Texas, with Eagle Ford Shale reporting a 43% decline week/week (w/w) to 32, and in the Permian Basin, off 19% to 139.

“Operators have consistently lowered permitting in Texas over the past three weeks to 140 (down 43% w/w),” West said. West Texas District 8 in the Permian reported an 11% decline w/w to 76, with District 9 falling 33% to only two permits.

Nationwide, permitting year-to-date had fallen by 63% year/year (y/y) to 5,593, with publicly held operators sharply curtailing activity levels in the Powder River Basin, down 97%. Eagle Ford permitting to date is off 18%, and in the Permian, it is down 9%.

On a year-to-date basis, the Railroad Commission of Texas has approved 2,124 permits in the Permian, “representing 38% of the U.S. overall permit count,” according to the Evercore team. “Permitting occurring in Texas District 8 has dropped to 1,074 (down 39% y/y) mainly as a result of activity falling” in Reeves (down 54%), Pecos (down 79%) and Andrews (down 59%) counties.

The permitting decline is not unexpected as a slew of operators began revamping capital expenditures (capex) earlier this month, citing the escalating uncertainty from the coronavirus pandemic, as well as miserable oil prices.

“The rapid and widening spread of the coronavirus outbreak, deteriorating global economic outlook, falling oil prices and asset price declines are creating a severe and extensive credit shock across many sectors, regions and markets,” Moody’s Investors Service said Friday. “The combined credit effects of these developments are unprecedented.”

The exploration and production (E&P) independent sector has been most “significantly affected by the shock,” given its “sensitivity to consumer demand and sentiment.”

Moody’s credit analysts Friday also discussed the potential additional risks for producers if low oil prices were to persist in the long term.

“In our base case scenario, we expect that the effects from the virus will persist into the second quarter of 2020, with improving economic fundamentals in the second half of the year,” the Moody’s analysts said. “The large integrated oil companies have demonstrated resilience in previous downturns, which should temper the degree of negative rating actions.”

For the investment grade E&Ps, “we would expect mostly negative outlooks or possibly reviews for downgrades, especially since E&P ratings are lower coming into this downturn compared to 2015-16.”

In addition, the speculative-grade E&Ps “are less resilient to an oil-price downturn,” the Moody’s team noted. “They are smaller and less diversified, have less liquidity, and their access to the capital markets is quite limited.”

Credit metrics also are likely to weaken for national oil companies, but their ratings remain linked to their respective sovereign sponsors, and we are unlikely to downgrade them imminently.” And while the midstream sector has limited direct commodity price exposure, a persistent downturn would lead to lower produced volumes of oil, natural gas and natural gas liquids, reducing both revenue and earnings.

Permian pure-play Centennial Resource Development Inc. was downgraded by Moody’s on Friday after the operator slashed capex by half and said it planned to run only one rig this year, down from five. The Denver-based E&P did not hedge its oil production at higher oil prices, which means cash flow would decline “materially in step with the decline in oil prices,” Moody’s analysts noted.

“Given the rapidly changing dynamics of crude oil prices, our top priority is to preserve our balance sheet and liquidity in this lower crude price environment,” CEO Scot Woodall said. “As such, we have prudently decided to defer any new drilling and completion activity as we continue to monitor the present market environment.”

Unlike Centennial, HighPoint has oil hedges in place giving it protection, Woodall said. More than 90% of its 2020 oil volumes are hedged at a West Texas Intermediate price of $58/bbl.

“The upstream oil and gas sector faces unprecedented uncertainty,” Wood Mackenzie researchers said Friday. “The range of outcomes for investment is very wide, but it is clear oil companies must act quickly. There are strong parallels to 2015-16, but the macro-environment is very different this time.”
Even if a new agreement is reached by the Saudi-led Organization of the Petroleum Exporting Countries and its allies, including Russia, “recent events have irreversibly changed perception of risk. The genie will not be put back in the bottle.”

Discretionary investment cuts are likely to be immediate and deep, researchers said. “Global spend could fall by well over 25% y/y…Large new projects will be put on hold and short-cycle discretionary investment will be dialed back to the bare minimum. Spend on projects under development and onstream will also be targeted. Exploration will be trimmed; operating and other fixed costs face intense scrutiny.”

Wood Mackenzie’s analysis suggested that only the lowest cost E&Ps with the strongest financials would be in a position to make “meaningful discretionary investments.”

The oil and gas supply chain is expected to feel as much if not more pressure, said Wood Mackenzie researchers.

“Coming into 2020, the service sector had been struggling with low margins, oversupply and weak investor sentiment. Any optimism regarding 2020 upstream project execution activity, prior to the oil price crash, has been unequivocally reversed.”