Old habits die hard, and for exploration and production (E&P) companies long inclined to overspend, a commitment to curb outlay to align with cash flow may go out the window as they contend with higher prices for equipment and services, increasing labor shortages and peer pressure to build volumes. 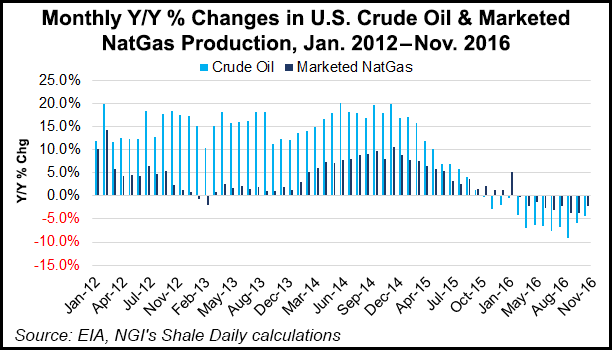 Coming out of what arguably has been the worst downturn in the oil and gas industry ever, many E&Ps — independents and the oil majors — have made promises about matching future capital expenditures (capex) to cash flows. But that’s easier said than done, according to Wells Fargo Securities LLC senior analysts David Tameron and Gordon Douthat. Overspending, which contributed to the pain felt by companies caught in the commodity price plunge in 2014, is not only likely but it could become de rigueur once again.

“We continue to hear about plans to live within cash flow, but as confidence in the commodity outlook notches higher, we think E&Ps are quick to resort to old habits,” with a 126% average 10-year historical spending gap, Tameron and Douthat said.

Most of the oil majors and few of big independents have laid out their projections for 2017, with capex plans coming into sharper focus over the next week. A bevy of players focused on the Permian Basin, where most of the work is ongoing, is set to issue results, including Cimarex Energy Co., Devon Energy Corp., Encana Corp., Laredo Petroleum Inc. and Noble Energy Inc. Marathon Oil Corp., which is directing more of its capex to Oklahoma’s stacked reservoirs, also is scheduled to issue results.

Using U.S.-based E&Ps they cover, Wells Fargo analysts conducted a debt-adjusted per-share review, normalized to reflect capital discipline. Consensus capital spending as a percentage of cash flows for the covered E&P companies currently is at 104% for 2017 and 98% for 2018.

“But looking back over the last 10 years, we find that E&Ps have spent an average of 126% of cash flows, including 138% from 2011-2015,” Tameron said. “As commodity prices have rebounded, the attention has shifted from capital preservation to volumes growth. Given this mindset, we see E&Ps as more likely to justify outspending cash flows,” which differs from prevailing consensus expectations.

Wells Fargo modeled capital spending for its coverage group that is equal to 116% in 2017 and 112% for 2018. Ultimately, “we think these numbers could be light,” Tameron said.

Because of producers’ propensity to outspend cash flows, questions remain about whether the E&P model “is truly a business model, or if all that matters is production growth, and thus E&Ps are simply a proxy for the commodity (and yes, Wall Street does the ultimate voting and continues to allow/encourage this behavior).”

Shale manufacturing, with its ability to quickly ramp up activity or lay down rigs, could change the business model, but “we will continue to remain very skeptical until we see otherwise.”

“Producers are great at showing how lucrative their mid-cycle economics are, which typically only include drilling and completion costs. That’s fine over the shorter run, when more costs are fixed. But businesses operate for the long run, and in the long run, more costs are variable, and therefore must be included in the calculations.

“Ultimately, companies are judged on whether they earn a return on invested capital greater than their cost of capital over time, and that means including all costs, including acreage and asset acquisitions, and things like pipeline take-or-pay contracts,” Rau said.

Making things all the more difficult for E&P companies is that they do not have “real” pricing power.

“Sure, they can impact their realized prices through hedging, but all-in-all, they are price takers,” Rau said. “They cannot command prices with strong brands, such as Apple, which weighs on their returns. Ultimately, many E&P companies struggle to earn a sufficient return on invested capital over the long run.”

The commodity price fallout was expected to change the perspective, and thus the business model, of E&Ps.

For example, Pioneer Natural Resources Co. “has been vocal about returning cash to shareholders,” which if it’s done and well received by shareholders, “would be a seismic perception shift for our coverage universe. But we remain skeptical, and believe that until either management compensation incentives change or Wall Street begins to truly reward returns, or return of excess cash, capital discipline will not be the trend.”

Operators seem to have short memories about capital discipline, and there are signs that increased capex is a given.

“Of the 17 companies that have provided capital guidance on 2017 thus far, all but one have announced an increase in spending, with the average budget up 42% from 2016,” Tameron and Douthat said. “And we believe that this number will grow, as our forecast contemplates 55% year/year growth in capex.”

More data points will emerge as earnings season progresses in the next few weeks; most of the U.S. onshore E&Ps have yet to report their quarterly and year-end results.

“Just looking at our coverage universe of 30-plus U.S. E&Ps, we are expecting spending to increase by 50%, and total production to increase by 11%,” Haas said. Oil and natural gas liquids output should be up by more than 15% this year, with dry natural gas at around 5%.

“This is just a preliminary snapshot,” she said. “To arrive at any meaningful conclusions, we still need more data from the rest of the producers and, more important, the large integrated companies, as they control 30% of U.S. oil and gas production and they might be slower in raising spending and resuming growth.”

A six-month lag is given between activity and the production response, which means a clearer picture will emerge by the second half of 2017, according to Haas.

In the E&P conference calls to discuss earnings, Haas said she’s keeping an ear to hedging plans for 2017 and “color on how to bulletproof this year’s capital spending programs…”

Pioneer Natural is assuming “an overall notional cost inflation probably in the neighborhood of 10-15% for the year,” CEO Timothy L. Dove said during the quarterly conference call. “I believe we’ll be able to keep our inflation numbers down to more like, approximately 5%. But the internal plan is to make sure that cost inflation is offset by our efficiency gains, which we’ve been able to prove for quite a long time now.”

Onshore operators already are seeing higher oilfield service (OFS) costs. Schlumberger Ltd. and Halliburton Co., among others, signaled in their fourth quarter calls that they would take no prisoners as they push for better returns after accommodating E&Ps since the downturn.

ExxonMobil Corp. said it plans to drill the longest laterals ever in the Permian Basin’s Delaware play this year, laterals two miles or longer. Likewise, Permian bigwig Occidental Petroleum Corp.’s Jody Elliott, chief of U.S. operations, said 10,000-foot laterals in the Permian are “no longer a challenge, and we’re looking at the option of 15,000 feet now.”

Efficiencies have reduced costs, but using super-spec rigs, more proppant and increased fractures will increase spending. Onshore contract driller expert Patterson-UTI Inc. reactivated two fracture spreads during the fourth quarter and began rehiring crews, as more rig equipment moved off the stacks and back to work in the oil and natural gas fields.

A debate has emerged among energy investors “surrounding service cost inflation, the magnitude of structural cost savings, and the transfer of economic rents from E&Ps to the service space.”

Schlumberger is “just getting started,” Kibsgaard said, “in terms of earnings growth before the downturn hit, and an international pricing push will be crucial for earnings power; E&Ps take note — 2017 will see a service cost inflation ”avalanche.’”

Meanwhile, Halliburton “put its customer base on notice stating that they should expect something higher than the 5-10% amount, which many E&Ps are currently incorporating into their budgets,” West said. “Operator-contractor conversations have shifted in focus from maximizing pricing concessions to securing equipment to meet incremental work scopes. As a result, pricing has recovered (albeit off a low base), with Halliburton further accelerating margin improvement by ceding unprofitable work and focusing on the customers who offer the most efficient work programs.”

Another cost factor is field talent. Following the massive layoffs across the E&P and OFS sectors, the labor pool has dried up, which means retraining costs and relocation costs likely will lead to increased budgetary concerns.

Hiring lead times are expected to double in the second quarter, West said.

“One prominent U.S. pressure pumper that we spoke to cited significant increases in staffing lead times” the Evercore analyst said. “This provider estimates that in the Permian Basin specifically the 30-day lead time witnessed just two short months ago has since grown to nearly 45 days, and that this lag is liable to grow to 60 days by 2Q2017 as the industry works through warm-stacked equipment.”

To combat the challenge of breaking in new crews not trained to do the work, the pressure pumping company has begun adding its hires “to fully staffed spreads in order to expedite the training process,” West said. That has led to higher/spread labor costs “until enough workers are trained to effectively spin out another crew.”