Upstream investor Kimmeridge Energy Management Co. LLC has the U.S. exploration sector in its sights and is calling out the industry for its “lack of alignment” between the executive management teams and their shareholders. 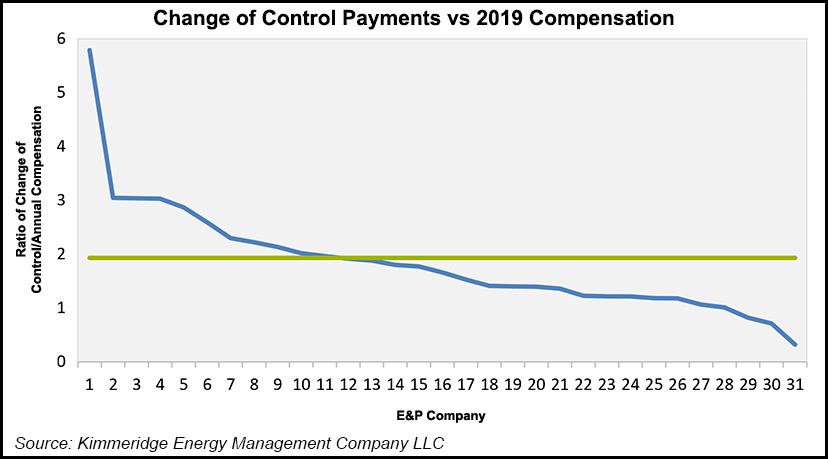 The New York City-based private equity (PE) firm said in a white paper that executive compensation for the exploration and production (E&P) sector was still rising, even though it is “one of the worst performing sectors” in the past decade.

In the last several months, Kimmeridge has taken stakes in Denver-based Cimarex Energy Co., Ovintiv Inc. and PDC Energy Inc. “with a view toward constructive engagement, fully in line with the principles outlined in our research.” Kimmeridge took positions worth around $62 million total in the three E&Ps.

The PE team slammed the “skewed incentives and low insider ownership” among the E&P sector, which has led to a “corporate governance crisis.” The boards also don’t appear willing to hold management teams accountable, with executive compensation increasingly regardless of performance.

Because executives face no threats to be fired and few financial incentives to consolidate, they instead “are focused on extending their tenure rather than preserving and maximizing long-term value for shareholders,” according to the firm.

“Unless accountability and alignment are restored, the sector will continue to struggle to attract capital, remain unprepared for the energy transition and be rendered essentially irrelevant.”

Kimmeridge said boards could strengthen oversight by mandating upfront stock purchases and by paying directors’ fees in equity that has to be held for the duration of their tenure. In addition, the PE is pushing for “minimum ownership thresholds for directors over five and seven years,” and said directors should no longer be designated as “independent” after nine years.

Kimmeridge also suggested ways to promote alignment with shareholders. The E&Ps should eliminate “growth metrics and subjective discretion from short-term incentives,” and establish 100% “performance-based long-term incentives that are only settled in shares.”

Said Public Equities head Mark Viviano, “When compensation becomes a right rather than an award, the entire relationship between management and shareholders breaks down.

“Despite being one of the worst performing sectors on a three-, five- and 10-year basis, E&P executive compensation continues to rise. The threat of irrelevance in the face of the energy transition requires a sense of urgency yet to be observed in E&P boardrooms. The only solution is comprehensive reform that addresses board oversight in parallel with realigning executive compensation.”