The capital markets for U.S. exploration and production (E&P) companies “appear wide open,” with most of the available funds likely to target onshore oil instead of natural gas through 2014, Barclays Capital analysts said on Wednesday. 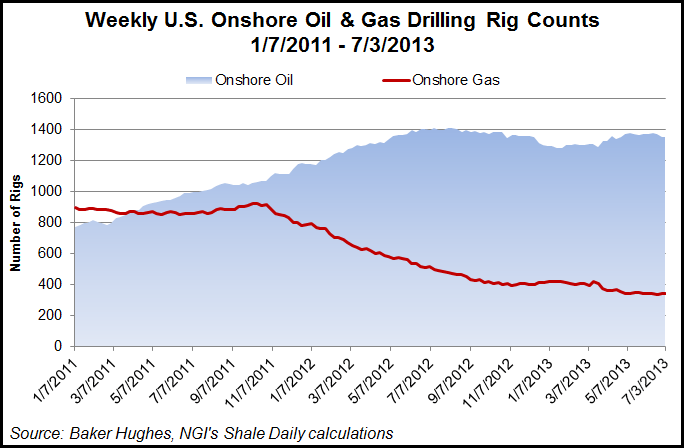 “On average, producers should be able to raise funds for drilling any profitable targets. In other words, the amount of capital that producers deploy in drilling is more likely to be limited by the range of targets in their portfolios that are profitable at current prices than by a lack of investor appetite to fund new drilling.”

It’s not easy to separate the amount of capital committed to gas drilling from oil drilling because most E&Ps have a mix of production, and funding could be tailored for several projects. However, most of the money today is on oil targets and will remain so “for the foreseeable future” if Barclays price projections prove accurate.

The “gas-directed rig counts have continued to dwindle. Depressed gas-directed drilling is a reflection of better opportunities to drill for oil, rather than a result of scarcity of capital, in our view.” Only the Marcellus Shale “competes favorably” with oil targets, “while the Fayetteville and Barnett shales appear marginally profitable. Consequently, while gas-directed drilling has collapsed, oil-directed drilling continues to flourish.” The number of onshore natural gas rigs in the United States has slid from more than 900 in late 2011 to just 341 as of July 3, according to Baker Hughes data and NGI’s Shale Daily calculations. Over that same period, the number of onshore oil rigs has increased from just over 1,000 to 1,352.

Barclays’ credit analysts “note that many gassier companies saw the borrowing base of their revolvers contract in the second half of last year, but this did not translate into a capital crunch, as debt was cheap and easily accessible through other vehicles. This year, while natural gas prices have recovered from last year’s lows, the borrowing base of revolvers has largely remained unchanged, as banks continue to use conservative pricing assumptions.”

E&P cash flows from existing production appear to be “adequately protected,” with more gas output covered by hedges this year than in 2012. Oil hedges are also at record levels for current-year volumes.

Gas production covered by hedges has increased this year because producers took advantage of the spring price rally, said Pehlivanova and Wang. To date, “they have added hedges more aggressively than in the past three years,” up 16% year/year, versus incremental current year hedging in the first half of 2011 of 3% and 6% in the first six months of 2012.

However, “we do not expect increased hedging to result in a significant uptick in gas-directed drilling at this time.”

Even on the short-lived gas price rally, Barclays research found that for 2013 and 2014, E&Ps locked in “significantly” lower prices than previous years. For those with 2013 hedges, 27 producers used swaps with an average price of $4.27/MMBtu, while 12 used a combination of collars and puts, with an average floor of $4.03/MMBtu.

Oil hedging also is becoming “increasingly relevant” to gas drilling and production, they noted. At the end of June producers covered by Barclays had hedged a record 65% of output for 2013 and 43% of production for 2014.