The value of U.S. energy exports to Mexico in 2017 exceeded imports for the third year in a row, according to the Energy Information Administration (EIA). 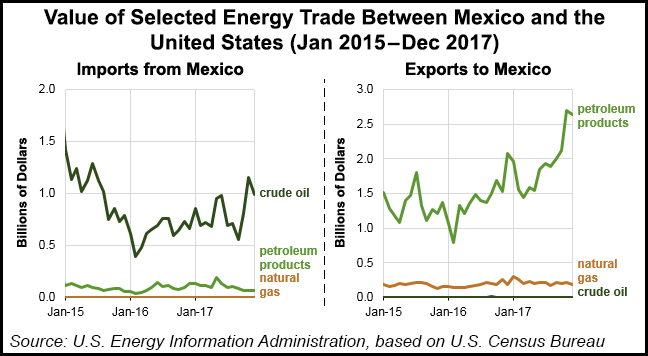 U.S.-to-Mexico exports in the energy sector reached a high of $25.8 billion in 2017, more than double the $11.1 billion in energy products that Mexico sent to the United States last year, EIA said.

“Based on the latest annual data from the U.S. Census Bureau, energy accounted for more than 10% of the value for all U.S. exports to Mexico and 4% of all U.S. imports from Mexico in 2017,” it said.

The drop in international oil prices has also contributed to the shrinking value of Mexican energy exports. The country sent 608,000 b/d of crude to the United States in 2017, or 8% of all U.S. oil imports last year, according to the EIA.

The United States, in turn, last year exported more than 1 million b/d of petroleum products to Mexico, from 880,000 b/d in 2016. The total value of the exports, mostly gasoline and diesel, was $23.2 billion.

Natural gas also accounts for a growing share of domestic energy exports to Mexico, billing $2.6 billion in 2017 versus $2.14 billion in 2016, according to Census Bureau data.

The United States last year sent 4.6 Bcf/d to Mexico, most it of through pipelines along the 1,954-mile continental border, the EIA said.

“Increasing shipments of natural gas by pipeline to Mexico are contributing to the United States’ emerging status as a net natural gas exporter,” according to the agency. Pipeline shipments to the Mexico accounted for roughly half of all U.S. gas exports in 2017.

Mexico imported 5.01 Bcf/d of natural gas last year, including 4.36 Bcf/d through pipelines, according to the Mexican energy ministry (Sener).

Gas imports supplied around 63% of Mexico demand, which averaged 8.03 Bcf/d in 2017. Mexico’s reliance on imported gas is closer to 85% of demand when excluding roughly 2.2 Bcf/d used by state oil company Petroleos Mexicanos (Pemex) for reinjection and other upstream activities.

The Mexico government expects gas imports to peak at 6.08 Bcf/d in 2020. Various greenfield pipelines and expansion projects are under development along the border, including Nueva Era and the Valley Crossing pipelines, both in South Texas.

“Natural gas pipelines currently under construction or in planning stages are expected to nearly double the pipeline natural gas exporting capacity from the United States to Mexico by 2018,” according to the EIA.

In Mexico, private developers are completing downstream infrastructure needed to receive the new cross-border flows. Several pipelines in northwestern Mexico are expected to come in service during the second half of this year to receive gas via the Waha Hub in the Permian Basin.

To the east, the 2.6 Bcf/d Sur de Texas-Tuxpan marine pipeline, due in service by December, would transport gas delivered by Valley Crossing down along the Mexican Gulf Coast to the port of Tuxpan, where it would supply power plants. The pipeline is also expected to help ease gas shortages further south on the Yucatan peninsula.

Mexico is also the leading destination for U.S. exports of liquefied natural gas (LNG), according to the EIA. The country received 168 Bcf of LNG shipments from the United States between February 2016, when exports began at Cheniere Energy Inc.’s Sabine Pass terminal, and December 2017.

Last year Mexico imported an average 643 MMcf/d in LNG, with a peak of 900 MMcf/d in August, according to Sener. Cargos were delivered to the Manzanillo LNG terminal in Colima on Mexico’s Pacific Coast and to the Altamira terminal on the Gulf Coast, near Tampico.

Mexico’s third LNG import facility, Costa Azul on the Baja California peninsula, has not received any shipments since June 2016. The terminal’s owner, Sempra Energy, is evaluating a project to convert Costa Azul to a liquefaction facility for gas exports to Pacific markets.