How attacks on key oil facilities over the weekend in Saudia Arabia impact the U.S. energy sector will be proven in the coming weeks and depend heavily on how long the supply outage lasts, experts said on Monday. 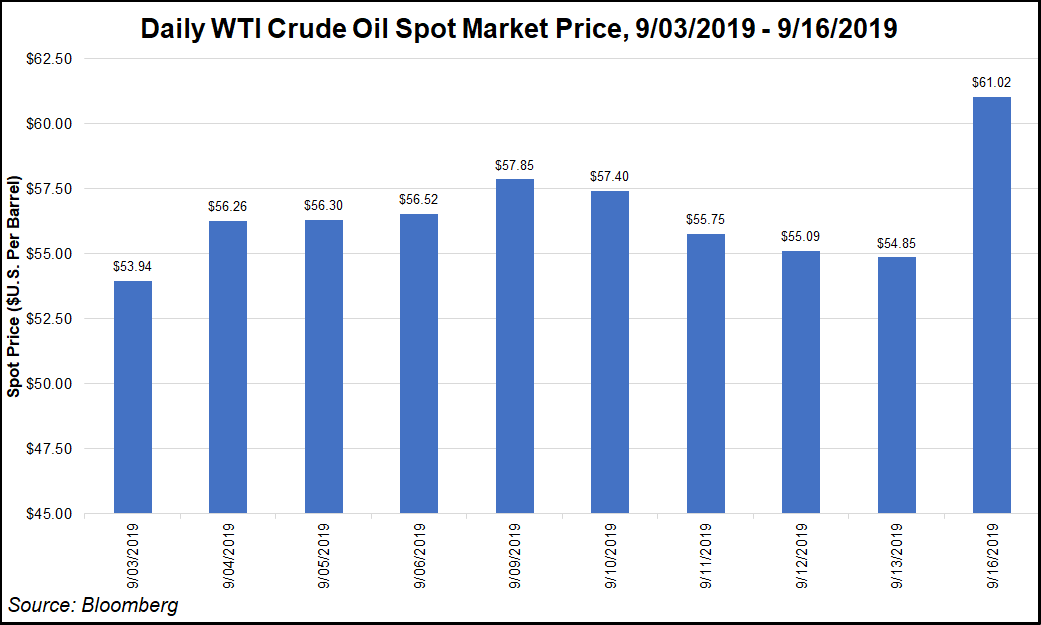 Attacks on the Abqaiq processing facility and Khurais oilfield were billed Monday as the worst in history, as they knocked out half of the kingdom’s capacity, or about 5% of global supply, and prompted the sharpest spike in oil prices since the Gulf War. Saudi officials said they expect to return about 2 million bbl of the 5-6 million lost in the attacks by the end of Monday, but analysts were skeptical of how the damage could be repaired so quickly.

“A lot of this, of course, depends on how long the Saudi supply will be offline,” said NGI’s Patrick Rau, director of strategy and research, when asked what effect the incident could have on U.S. producers. “Since they are the only country with spare production capacity, any extended outage would be rough on the markets, since that buffer is gone right now.”

Saudi Arabian Oil Co., aka Aramco, is expected to provide updates throughout the week. Oil prices soared. October West Texas Intermediate (WTI) Nymex futures settled at $62.90/bbl, up $8.05 from Friday’s settle, the highest since May for a front month contract. The November Brent contract finished at $69.02, up $8.80 from last week.

However, the rally and higher prices could be short-lived, especially if Saudi Arabia can bring production back online quickly and governments release strategic reserves if the oil market does begin to seesaw. President Trump on Sunday authorized a release from the U.S. Strategic Petroleum Reserve if needed, but Energy Secretary Rick Perry told CNBC Monday that it was too soon to say if that would be necessary. According to analysts with Raymond James & Associates Inc., there is roughly 2 billion bbl of oil in reserve around the world that could offset the loss from Saudia Arabia for more than a year.

“Given the duration of the outage, we suspect equity performance may be short-lived as investors continue to focus on imbalances in 2020 crude fundamentals,” said analysts at Tudor, Pickering, Holt & Co.

For now, U.S. E&Ps are unlikely to respond with a ramp in production, especially as they face pressure from investors seeking better returns and capital discipline.

“U.S. E&Ps could help take up the production slack, at least in theory, but they are still in the penalty box with respect to capital expenditures and rig counts right now,” Rau said. “I’d think they would still divert any incremental cash flow from higher crude prices into paying down debt and returning cash to shareholders than they would to increase their rig count by a material amount.”

Prices are expected to continue rising this week before settling. But depending on various scenarios, they could increase sharply in the coming months, according to various analyst projections.

If producers were to respond to sustained high prices, it would be months before supplies increased given the time its takes to turn wells online. The drilled but uncompleted well inventory could be worked down at a slightly faster pace, but “it’s just not like a spicket or a faucet that you turn on and off that easily,” said analyst Matt Hagerty of BTU Analytics LLC.

Hagerty also told NGI’s Shale Daily that while pipelines have continued to come online in the Permian Basin, the artery of U.S. crude production, oil export capacity along the Gulf Coast is nearing its maximum. Producers could possibly “eke out” another 500,000-700,000 b/d, but he said that would be tough.

“That’s kind of difficult to do; we don’t live in a perfect world,” Hagerty added. “That’s a big ask when you’re thinking about the global stage, there’s still a significant shortfall.”

Booming U.S. oil production has insulated the markets in recent years from factoring in the volatility of conflicts in the Middle East. The attacks over the weekend have jolted that calm. The Abqaiq facility — the world’s largest — processes an astonishing 7 million bbl of sour crude into a sweeter grade that can be used by simpler refineries around the world. While the facility’s end product is similar to WTI, Hagerty said, even soaring U.S. production couldn’t match the void that was left in the aftermath of the attacks.

“The world is not even close to being able to replace more than 5 million b/d of Saudi Arabian exports,” said Rystad Energy’s Jornar Tonhaugen, head of oil market research. “The market’s reaction to Saudi Arabia’s importance in the new era of U.S. shale will now be put to the test.”

Many analysts agreed that going forward the market could likely price such risks into oil prices even after Saudi Arabia repairs the damage and gets volumes back to normal.

“The attack on Saudi Aramco facilities highlights the role of geopolitical risk on oil prices, which will likely reflect a risk premium even after Saudi production resumes,” said Moody’s managing director Steve Wood. “Higher oil prices will help producers and hurt refiners in the very near term, but the longer-term effect on energy companies will depend on the timing and magnitude of Saudi Aramco’s lower production.”

The Organization of the Petroleum Exporting Countries members and its allies, including Russia, haven’t indicated that they would increase output to fill any gaps. Saudi volumes were already said to be slowly ramping back up on Monday. According to Wood Mackenzie, Asian demand accounts for nearly 72% of Saudi Arabia’s crude exports.

Impacts on the U.S. market were expected to be negligible as Saudi imports have averaged about 620,000 b/d so far this year through June, or roughly 3% of national demand.

While Yemen’s Houthi rebels claimed responsibility for the attack in the country’s ongoing conflict with the kingdom, the U.S. blamed Iran. Saudi officials also offered no evidence in saying that Iranian weapons were used in the drone attack, throwing another wrench into the geopolitical elements of the incident.