Shale and tight oil and natural gas resources in the Lower 48 have transformed the United States, with its approach to energy policy shifting from a “mind-set of scarcity” to one seeking to maximize the benefits of abundance, the International Energy Agency (IEA) said Friday. 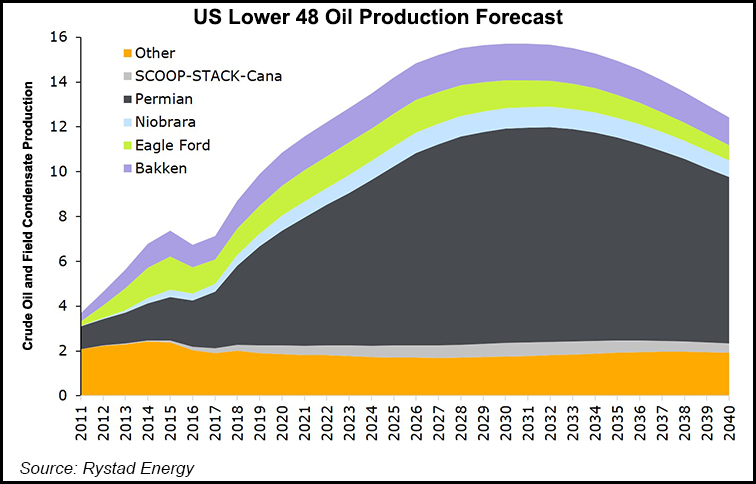 In its first review of U.S. energy since 2014, the global energy watchdog highlighted U.S. leadership on innovation and the far-reaching impacts of the drilling revolution, which has allowed the country to become an oil and liquefied natural gas (LNG) exporter..

“Since the last in-depth review five years ago, the United States has reshaped energy markets both domestically and around the world,” said IEA executive director Fatih Birol. He presented the report in Washington, DC, on Friday with Energy Secretary Rick Perry. “In this context, the IEA commends the lifting of the U.S. ban on crude oil exports, as well as efforts to streamline regulatory approvals for LNG exports, which have helped bolster global energy security by diversifying supply options for importers.”

Domestic energy policy today, according to the IEA, reflects a strategy to increase production, benefit from more exports, become a leader in energy technologies and keep consumer energy bills in check.

“A central plank of the strategy is to reduce regulatory hurdles to expanding U.S. energy production and increasing the competitiveness of the U.S. energy industry,” IEA said. Emissions are expected to decline over the coming decade, but nuclear plant retirements, along with less stringent emissions regulations, “risk offsetting gains from the move toward natural gas and renewables for electricity generation.”

Future production growth and exports are going to depend on a complementary buildout of oil and gas pipelines, researchers noted.

“Though the government has made efforts to streamline federal licensing for energy infrastructure, there remain cases of midstream infrastructure struggling to keep pace with shale production growth. Timely siting of gas pipelines will also help efforts to reduce gas flaring rates from oil production.”

While gas has overtaking coal in power sector generation, renewable power has surged on declining costs and “policy support.” Because of the competing issues, IEA recommended policy and regulatory responses ensure a “smooth transition” in the electricity sector to leverage an increase in variable renewables while keeping the overall power system “reliable and resilient.”

As the onshore revolution moves the United States toward becoming a net oil exporter, modernizing the U.S. Strategic Petroleum Reserve also is warranted

“The United States is a cornerstone of global energy security and will play a critical role in any future IEA collective responses,” Birol said.

Researchers also highlighted the role the United States has assumed as a global leader in energy innovation.

“Research efforts supported by the Department of Energy and its National Labs will continue to bear fruit for global energy transitions, including in areas of carbon capture, utilization and storage, advanced nuclear technologies and system integration of renewables,” Birol said.

The potential natural gas reserves in the United States were an estimated 3,374 Tcf at the end of 2018, a record high, according to a biennial report conducted by the Potential Gas Committee (PGC).

The reserves estimate issued a few days ago was the highest resource evaluation in PGC’s 54-year history, and larger than the group’s 2016 assessment by about 20%, said the American Gas Association, because of reassessments of shale gas resources in the Northeast and Midcontinent areas, as well as conventional and tight gas in the Midcontinent and Rocky Mountain areas.

U.S. Light Tight Oil, or LTO, which is what most of the Lower 48 oil is composed of, represented under 1% of global oil supply nine years ago, Rystad noted. Today LTO represents “close to 10% of total global oil supply, a percentage which is expected to continue its ascent going forward.”

“Based on our analysis, the oil price would need to be as low as $42/bbl WTI going forward” for LTO supply by 2030 to be as low as a reference case by the U.S. Energy Information Administration, said Rystad’s Sonia Mladá Passos, a product manager of the Shale Upstream Analytics team.

A consensus exists among prognosticators that the Permian Basin will be the dominant player of 2040 U.S. oil supply, but there are varied estimates about how large that supply may become.

“Our forecast is the most bullish,” Passos said. “In Rystad Energy’s base case price scenario we expect Permian’s production to grow to around 7.5 million b/d by 2040…

“The price factor is of course one of the deciding assumptions that defines our forecast for the U.S. LTO supply in the long term. As reflected by our base-case price scenario, we expect the oil price to increase in the long-term.”

Rising U.S. oil supply would be driven in part by the large inventory of wells yet to be developed. The Permian in particular is estimated to hold thousands of economic sites under the oil price expectations for the future, Rystad noted.

“We also estimate that growing production in the basin will be met by adequate takeaway capacity expansion as a number of additional not yet sanctioned pipeline projects have been proposed,” Passos said. “However, it should be noted, that any changes in future market conditions would have an immediate impact on our shale production projections.”