Joseph R. Biden Jr. has become the president-elect and will take office in January, heralding a seismic shift in energy and climate policy from the executive branch. 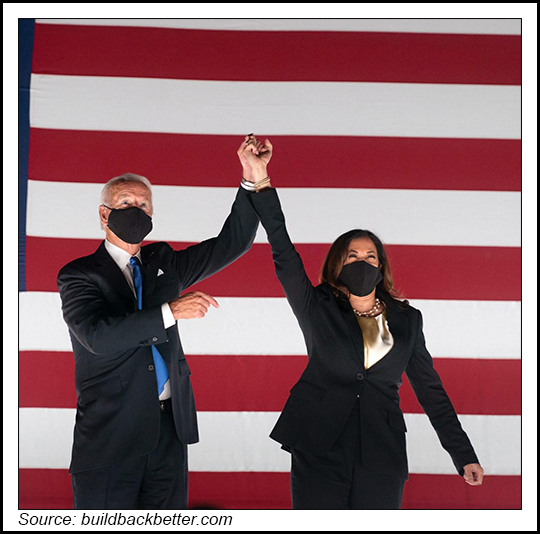 However, any major legislation could be stymied by a divided Congress, assuming Republicans retain their majority in the Senate, while executive actions could be challenged by a more conservative federal judiciary.

“We congratulate President-Elect Biden and Vice President-Elect Harris and look forward to working with their administration to ‘build back better’ and invest in domestic infrastructure,” said INGAA President Amy Andryszak, referring to Biden’s $2 trillion climate plan.

“Roughly one-third of America’s energy needs are currently met by natural gas, and most credible projections show that trend continuing for decades to come,” she said. “The President-Elect acknowledged the importance of natural gas during his campaign, and any serious plan to both address global climate change and develop a modern, reliable and affordable energy system must include natural gas as a foundational fuel.”

“America’s natural gas and oil companies haven’t waited for governments to act on climate — we have driven progress through technology, innovation and constant reinvention, and will support bipartisan policies that build on that progress,” he said. “We stand ready to work with members of both parties to forge those bipartisan solutions.”

Biden has pledged to ban new onshore and offshore drilling on federally owned tracts and to immediately issue an executive order to rejoin the United Nations landmark climate change accord, aka the Paris Agreement. He also has signaled he wants to put the United States on a path to a carbon-free power sector by 2035 and a carbon-neutral economy by 2050.

A Biden administration also is likely to reinstate and strengthen Obama-era environmental regulations that have been dismantled or weakened in the past four years on issues such as oil and gas methane emissions, and vehicle fuel efficiency standards.

However, Biden has stopped short of endorsing the Green New Deal championed by the more left-leaning faction of the Democratic Party. He also has repeatedly asserted that he would not pursue a blanket ban on hydraulic fracturing, aka fracking.

The final stretch of the election coincided with third quarter earnings season, allowing analysts to ask oil and gas executives for their thoughts on a possible regime change.

“The election process is not final and we, like you, are waiting to see the results when all legal votes are counted,” said Continental Resources Inc. executive chairman Harold Hamm on Friday before Biden’s victory had been called by major news outlets. The long-time Trump supporter and a founding father of the Lower 48 unconventional drilling boom discussed the election during a Friday morning call to discuss earnings results.

Hamm said if voters in energy producing swing states had known when early voting began about apparent plans by some Democrats “to eliminate oil and gas,” the vote tally could have swung more in Trump’s favor.

“Many energy supporting candidates did well in this election and we will have several champions back in the Senate and the House,” Hamm said.

Pioneer Natural Resources Co. CEO Scott Sheffield said during an earnings call last Thursday the biggest unknown was whether Biden would follow through on the federal drilling ban, “which would affect New Mexico, Wyoming and the Gulf of Mexico in federal waters.”

Such a ban could impact names such as Chevron Corp., whose management said during its 3Q2020 call that about 10% of its Permian Basin acreage is on federal land.

ConocoPhillips CFO William Bullock Jr. said Biden’s proposed tax plan could also have an impact. “There are two primary elements…that would impact us,” he said during the firm’s third quarter earnings call.

The first is Biden’s proposed change of the corporate tax rate from 21% to 28%, and the other that would be “fairly significant” is the possible ending of deductions for intangible drilling costs (IDC).

North America’s biggest midstream names, including Williams and TC Energy Corp., are increasingly signaling plans to embrace the energy transition and be a part of it.

“We feel like natural gas in a sober, less polarized moment is going to be a really important tool to continue to utilize renewables in a cost effective manner, and to continue to decarbonize energy use,” said Williams CEO Alan Armstrong last Tuesday in response to a question about the election during the firm’s 3Q2020 earnings call.

TC Energy CEO Russ Girling said in late October during the quarterly earnings call that the Calgary-based operator expects to invest in renewable generation, battery storage and green hydrogen across its expansive existing footprint in North America over the coming years as legacy infrastructure reaches the end of its useful life.

With respect to renewables and carbon pricing, Girling said, “There is some uncertainty with respect to it, but this is the direction the marketplace is going,” adding that there will be “tremendous opportunity for a company like ours to continue to participate in that, and deploy capital into…infrastructure that’s going to reduce emissions over the long term.”

Biden has indicated he would use his executive authority to rescind a crucial permit for Keystone XL, a conduit that would allow more Canadian crude to reach refiners on the Gulf Coast.

Girling said the fundamentals underpinning Keystone XL remain strong, and that the Gulf Coast would continue to refine oil even under the most aggressive climate action scenarios.

Enbridge management said in its 3Q2020 earnings call that permitting of the Line 3 Replacement project is in its final stages and expected to conclude shortly.

In a Monday note to clients, Raymond James & Associates Inc. analysts led by Pavel Molchanov and John Freeman said Biden “will have leeway to make regulatory changes via the EPA, Department of Interior, and trade policy, but — as always — these changes will be constrained by existing law and judicial review, as well as influenced by personnel decisions.”

The analysts said if Republicans hold onto the Senate, it will be “difficult if not impossible” for Biden to enact his major climate reforms.

Wood Mackenzie Vice Chair Ed Crooks said the most important consequences of a Biden presidency for the energy sector include a boost in support for onshore wind, restrictions on oil and gas development, regulatory hurdles for oil and gas infrastructure, and support for electric vehicles.

The onshore impact of a ban on new federal land lease sales would be minimal, Crooks said. “Offshore, the effects would be more significant, although they would take some time to become apparent.”

In a recent research note to clients, analysts at Clearview Energy Partners LLC said regardless of which party controls the Senate, a Biden administration was likely to “lean heavily on Executive Branch authorities” to implement a social cost of carbon, reverse Trump’s deregulatory efforts and curtail federal fossil energy leasing.

“Even so, a Biden administration’s regulatory reinterpretations of old laws for new circumstances could be in peril of reversal by the hundreds of strict constructionist jurists that Trump has installed into lifetime seats on the federal bench,” the Clearview team said.