As Covid-19 depressed petroleum demand, the value of the energy trade between the United States and Canada fell sharply from 2019 to 2020, according to the U.S. Energy Information Administration (EIA). 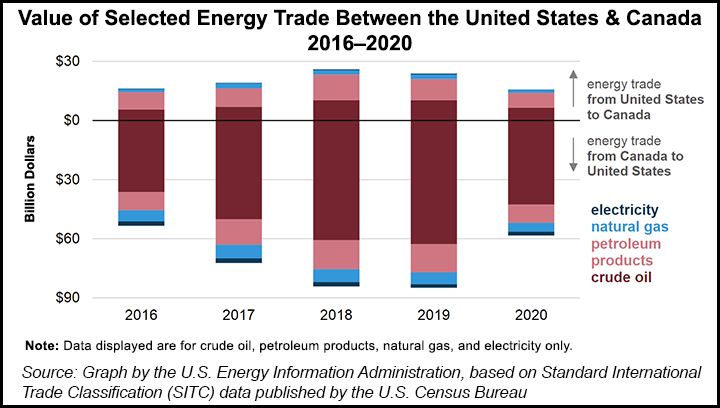 Citing U.S. Census Bureau data, EIA said the value of domestic energy imports from Canada fell 31% in 2020 compared with the previous year. The statistical arm of the U.S. Department of Energy (DOE) also noted the value of U.S. energy exports to Canada was down 34% during the same period.

EIA pointed out that 2019 was a record-setting year in terms of combined U.S. energy import and export volumes with Canada. U.S. oil imports from Canada averaged 3.8 million b/d in 2019 but dropped to 3.6 million b/d in 2020, the DOE unit noted.

One project that would help Canada to boost its oil export options beyond the United States is the C$12.6 billion ($10 billion) Trans Mountain Pipeline Expansion.

Underscoring the U.S.-Canada energy trade relationship, EIA said crude and petroleum products together made up 89% of the value of all imports from Canada in 2020. Because overall U.S. energy imports were down in 2020, however, EIA noted that southbound energy movements were at a four-year low. The DOE unit said the pandemic-related drop in petroleum consumption drove the decrease.

EIA said average U.S. crude exports to Canada — typically low-density and low-sulfur crudes destined for Eastern Canada — dropped from 479,000 b/d in 2019 to 420,000 b/d in 2020. It added that high-sulfur crudes from Western Canada’s oilsands, bound for refineries in the U.S. Midwest, make up the bulk of southbound flows.

Oil and product flows between the United States and Western Canada have been constrained recently amid flooding in British Columbia.

“Petroleum product trade between the United States and Canada is relatively balanced in both volume and trade,” EIA stated.