Oil and natural gas activity in Louisiana, New Mexico and Texas continued to grow in the final three months of the year but at a slower pace, according to the Federal Reserve Bank of Dallas. 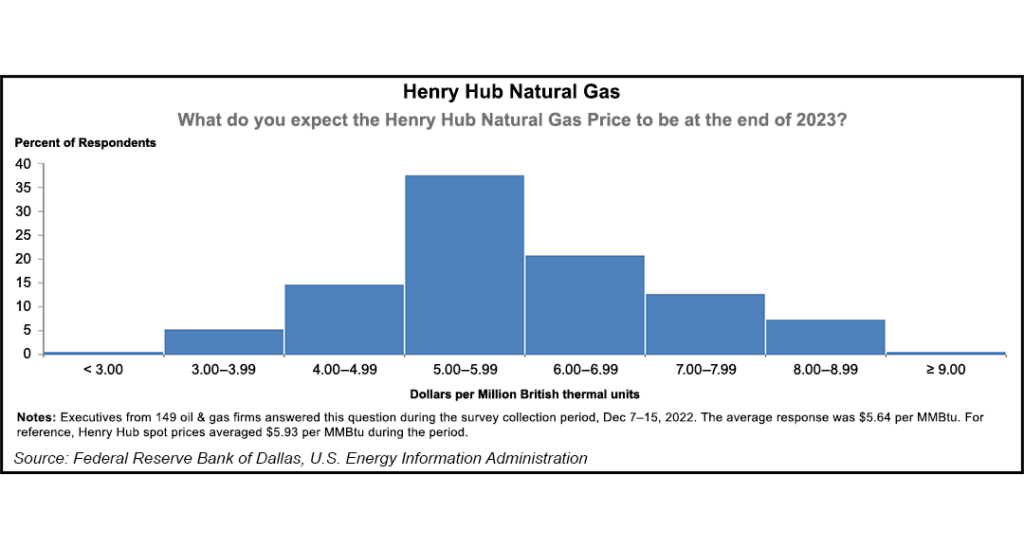 The quarterly survey of energy trends by the Dallas Fed, as it is known, showed the business activity index, the broadest measure of conditions facing Eleventh District firms, rose for the ninth straight quarter. However, it stood at 30.3 versus 46 in 3Q2022.

Dallas Fed surveys executives of exploration and production (E&P) and oilfield services (OFS) firms. Data were collected Dec. 7–15, with 152 firms responding. Of the respondents, 97 were from E&P firms and 55 were OFS executives.

“The oil and gas sector experienced another quarter of strong growth, but the pace of expansion slowed relative to the record-breaking levels seen earlier this year,” said Dallas Fed’s Michael Plante, senior research economist. “Costs continued to rise across the board, but survey results suggest they did so at a slower pace than last quarter.”

“Oil and natural gas production continued to increase, although at a slightly slower pace compared with the prior quarter,” according to executives’ responses.

Meanwhile, costs continue to rise across the board but more slowly relative to the third quarter. For E&Ps, the finding and development cost index stood at 52.5 from 64.7, while the index for lease operating expenses came in at 48.4, down almost 22 points from the third quarter. The input costs index fell about 22 points to 61.8.

“While survey results suggest the rate of cost increases has moderated somewhat, cost inflation and supply chain issues continue to impact the industry,” Plante said. “When asked what the biggest drag on their ability to increase production was, cost inflation and/or supply-chain bottlenecks was the most selected reason chosen by executives.”

Executives queried said it was taking longer to receive materials and equipment, but the pace of the delays has moderated.

OFS firms reported “broad-based improvement, with key indexes remaining solidly positive.” The equipment utilization index fell to 32.8 in 4Q2022 from 55.2 in 3Q2022. The operating margin index edged up to 25.9 from 25.4, while the index of prices received for services remained positive but declined to 43.6 from 64.9.

“All labor market indexes in the fourth quarter remained elevated, pointing to strong growth in employment, hours and wages,” the Dallas Fed economists said. Still, “optimism waned in the fourth quarter as the company outlook index posted a 10th consecutive positive reading but fell 20 points, below the series average, to 13.1.

Asked about capital expenditure plans for 2023, nearly 66% said spending is expected to increase. Most firms are using an oil price average of $70-85/bbl for 2023 capital budgeting.

About two-thirds of the executives of large E&Ps reported having plans to reduce carbon and methane emissions too.

“Larger firms, which make up a significant share of U.S. oil production, are much more likely to have these plans in place than smaller firms,” the economists noted. “More than a third of respondents from large E&P companies expect to reduce their greenhouse gas emissions by more than 10%.”

For the OFS executives, slightly more than 40% expect to “derive some income from services related to alternative energy, such as wind, solar or carbon capture by 2025.” Of the total, 35% expect up to 20% of their revenue to come from alternative resources.