Sixteen land-based rigs left the U.S. pack, according to the latest tally by Baker Hughes Inc., offset by a gain of three offshore rigs to yield a net decline of 13 U.S. rigs. 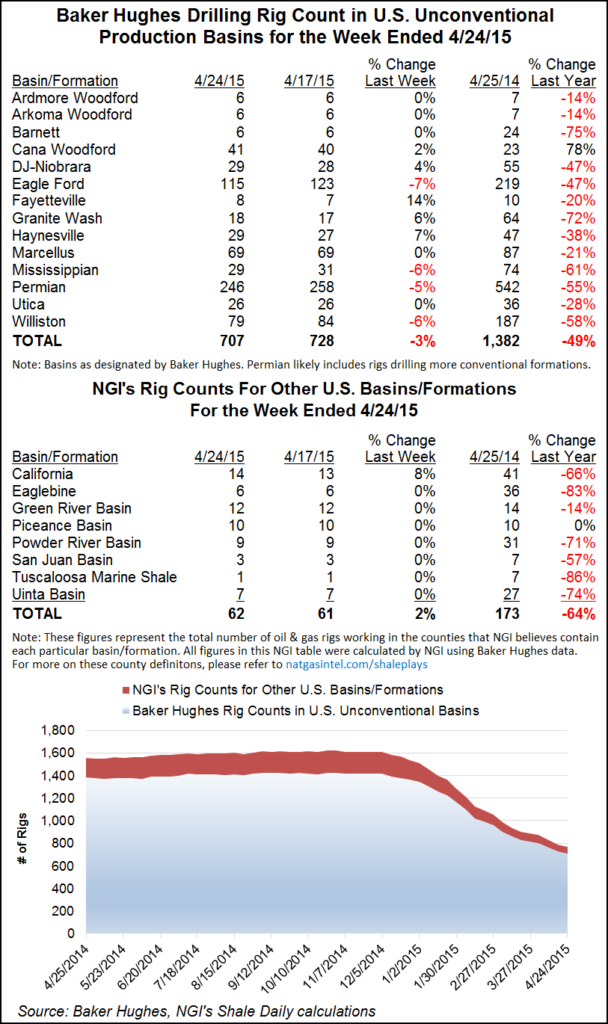 Five U.S. oil-directed units departed while eight gas-focused rigs packed it in. Eleven horizontals were lost along with two directional units. The U.S. count stands at 637, off 996 units from its year-ago level of 1,633, a decline of 61%.

Texas led the states among decliners, losing seven rigs, and the Haynesville gave up the most among plays, losing five rigs. Lights are still out in the Fayetteville Shale, with no rigs running there (see Shale Daily, Dec. 21, 2015).

It’s been more than a few months since Texas could boast of hosting half of the operating rigs in the United States. But there are still 294 Lone Star units soldiering on, with 199 of them in the Permian and 64 in the Eagle Ford. Texas accounts for about 46% of operating U.S. rigs now. In the latest round of declines, the Eagle Ford Shale lost four rigs, and the Permian Basin gave up three.

In the last 12 months, total Texas reported production was 1.01 billion bbl of crude oil and 8.4 Tcf of gas. Crude oil production reported by the commission is limited to oil produced from oil leases and does not include condensate, which is reported separately.

In Canada, the count continues to head in the opposite direction, at least for now, as rigs return from the winter holidays. The Canada tally added 23 units in the latest Baker Hughes count to end at 250. Twenty-four oil rigs returned and one gas rig left.

Thanks to Canada, the North American rig count gained a net of 10 rigs to end at 887.