The U.S. rig count fell another 17 rigs to drop to 301 during the week ended Friday (May 29), another sharp weekly decline that nonetheless suggests a flattening of the recent downward trajectory in onshore activity. 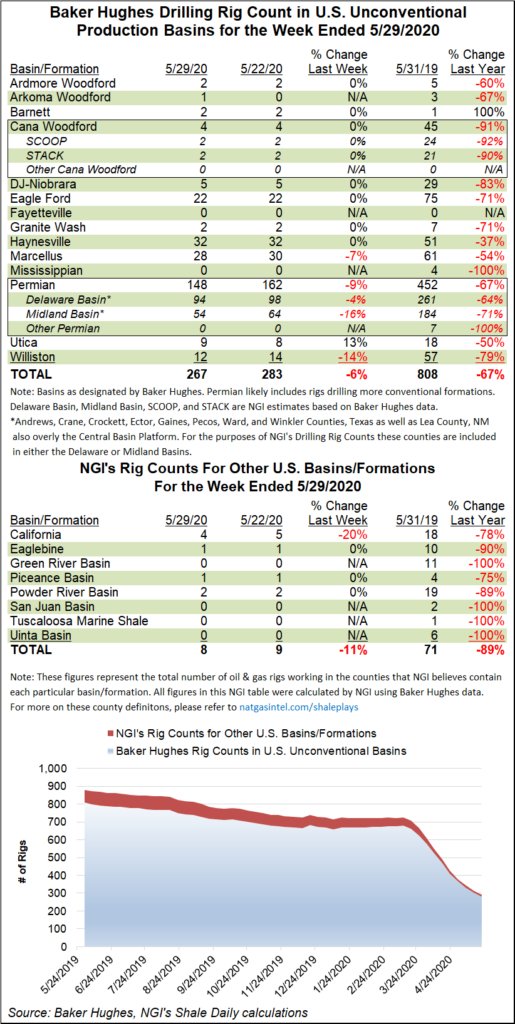 According to data from Baker Hughes Co. (BKR), the United States saw 15 oil-directed rigs and two natural gas-directed rigs exit the patch during the week, putting the overall domestic tally nearly 700 units behind the 984 rigs running at this time last year. U.S. operators have now laid down nearly 500 rigs since mid-March, one of many signs of the economic shocks delivered by the Covid-19 pandemic.

Two directional units and one vertical unit joined 14 horizontal rigs in exiting the patch for the most recent week. Gulf of Mexico activity held steady at 12, according to BKR.

In Canada, one oil-directed rig packed up shop, dropping the Canadian count to 20, down from 85 in the year-ago period.

The combined North American rig count finished the week at 321, versus 1,069 a year ago.

Among plays, the Permian Basin shed another 14 rigs to drop to 148, a fraction of the 452 rigs active at this time last year. The Marcellus Shale and Williston Basin each dropped two rigs on the week, while the Arkoma Woodford and Utica Shale each added one.

Among states, Texas dropped 11 rigs to fall to 127, versus 480 a year ago. New Mexico, North Dakota and Pennsylvania dropped two a piece. California saw one rig depart overall, while Ohio added one, according to BKR data.

The dislocations from Covid-19 to global energy demand have led to shut-ins and production cutbacks in the United States, and a recent report by Goldman Sachs analysts found that operators are responding by increasing oil and natural gas hedging into 2021.

Using information from exploration and production operators covered by Goldman, analysts estimated that through March, 47% of 2020 natural gas production was hedged, along with 66% of oil.

“Our update on covered producer hedging on the back of 1Q2020 results suggests an increase in 2020 oil hedging to recent highs, while 2021 liquids/natural gas hedging is above historical averages,” analysts said. “Relative to last quarter, we saw an 18% increase in 2020 oil production hedged,” with 60% of the increase resulting from increased hedges and 40% from lower production because of shut-ins and reduced activity.

This comes as the International Energy Agency expects the crisis to result in a sharp pullback in global natural gas and oil investments, with Lower 48 spending falling by half year/year.

The decline in investments worldwide has “serious implications” for security and the transition to alternative fuels, the global energy watchdog said in the World Energy Investment 2020 report.