On the strength of sharp gains in the Eagle Ford and Haynesville shales, the U.S. rig count surged 13 units higher to 601 for the week ended Friday (Jan. 14), according to the latest numbers from Baker Hughes Co. (BKR). 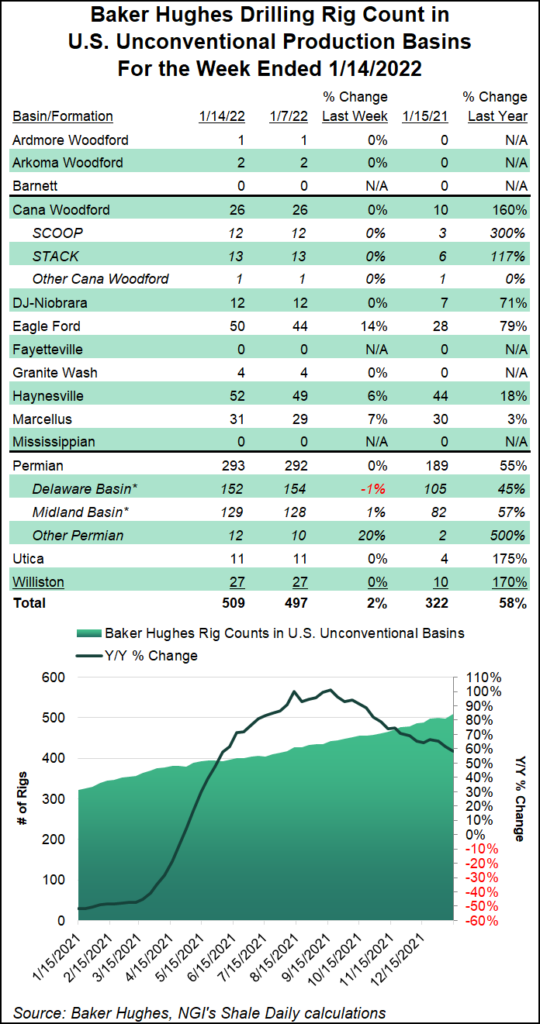 Net gains in the United States included 11 oil-directed rigs and two natural gas-directed rigs, with 11 added on land and two in the Gulf of Mexico. The 601 active rigs as of Friday compares with 373 rigs running in the year-earlier period, according to the BKR numbers, which are partly based on data from Enverus. Nine horizontal rigs were added week/week, alongside two directional rigs and two vertical units.

The Canadian rig count jumped 50 units for the period to 191 in the latest BKR count, including 43 oil-directed rigs and seven natural gas-directed. The combined Canadian count ended the period 30 units higher year/year.

Broken down by major producing region, the Eagle Ford led with a net increase of six rigs for the week, bringing its tally to 50, up from 28 in the year-earlier period. The Haynesville picked up three rigs, while two were added in the Marcellus Shale. The Permian Basin added one rig during the week to bring its total to 293, versus 189 a year ago.

Counting by state, Texas saw its total jump seven units to 281, while Louisiana added three rigs to raise its count to 55. Alaska, Pennsylvania and West Virginia each saw net increases of one rig for the period, according to the BKR data.

The rising rig numbers have correlated with signs of activity growth for the oilfield services sector.