The average depth of horizontal and vertical wells, as well as the total distance drilled, showed a marked increase between 2012 and 2013, according to the latest Joint Association Survey on Drilling Costs (JAS). 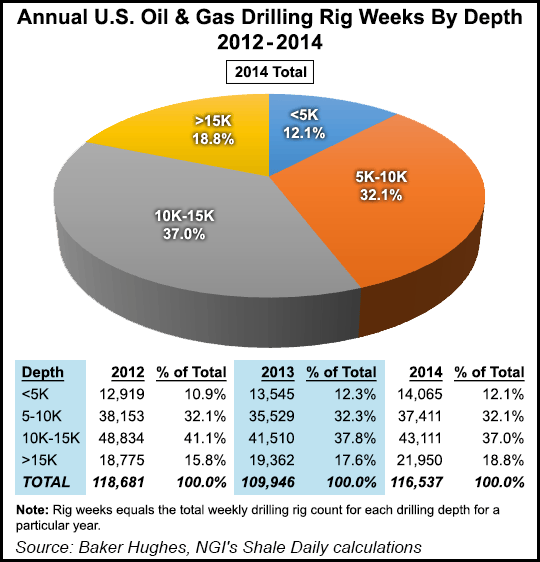 Close to 45,000 natural gas and oil wells were drilled during 2013 in the United States, with $147.7 billion invested, the American Petroleum Industry (API) survey found. The number of wells was down slightly year/year. However, deeper drilling depths and total distance drilled indicated rising efficiency.

“Even before the recent decline in oil prices, developers focused on maximizing each well, reducing the costs and surface footprint of energy production,” said API’s Hazem Arafa, who is director of statistics. “The well count didn’t rise, but the wells are getting deeper and more efficient. As a result, the U.S. is improving its ability to remain a competitive energy superpower, creating jobs and fueling economic growth.”

The data in the report were broken down by well type — oil, gas and dry holes — and by depth interval. Additionally, information is broken out by well class (exploratory wells and development wells), and offshore/onshore production.

“The cost per foot among shale wells has declined over 43% since 2009, and that drive toward efficiency is helping U.S. energy production to stay competitive in a difficult market,” Arafa said.

The 61st edition of the JAS, distributed by IHS Inc., is co-sponsored by the Independent Petroleum Association of America and the Mid-Continent Oil and Gas Association.