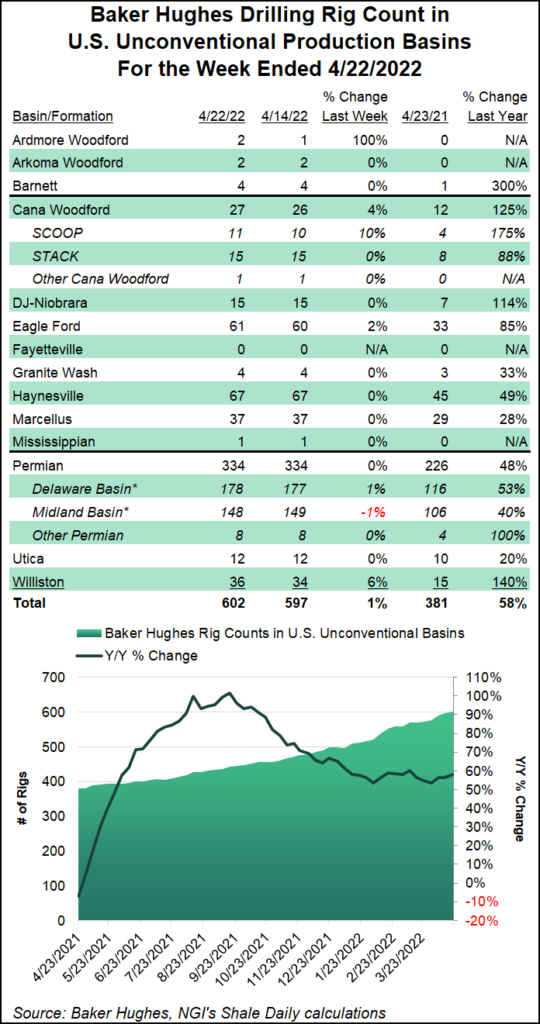 One oil-directed rig and one natural gas-directed rig were added overall in the United States for the week. Two rigs were added on land, along with one offshore (not in Gulf of Mexico), while one rig exited from inland waters for the period, according to the BKR numbers, which are partly based on data from Enverus.

Total domestic horizontal rigs increased by three for the week, partially offset by a one-rig decline in directional drilling. The 695 active U.S. rigs as of Friday compares with 438 rigs running in the year-earlier period.

The Canadian rig count eased two units lower to 101 as of Friday, up from 55 in the year-earlier period. Changes included declines of one oil-directed rig and one natural gas-directed unit.

Broken down by major drilling region, the Williston led with an increase of two rigs week/week, raising its count to 36, versus 15 a year ago. The Ardmore Woodford, Cana Woodford and Eagle Ford Shale added one rig each, the BKR data show.

Counting by state, North Dakota added two rigs week/week, mirroring the change in the Williston, while Alaska added one rig overall. Wyoming saw a one-rig decline for the period, according to BKR.

Upstream oil and gas employment in Texas gained 4,300 jobs in March, which brought the statewide headcount to 184,700, according to a recent report from the Texas Independent Producers and Royalty Owners (TIPRO).