A small net decline in natural gas-directed activity saw the U.S. rig count ease one unit lower to finish the week ended Friday (Aug. 19) at 762, according to the latest figures from Baker Hughes Co. (BKR). 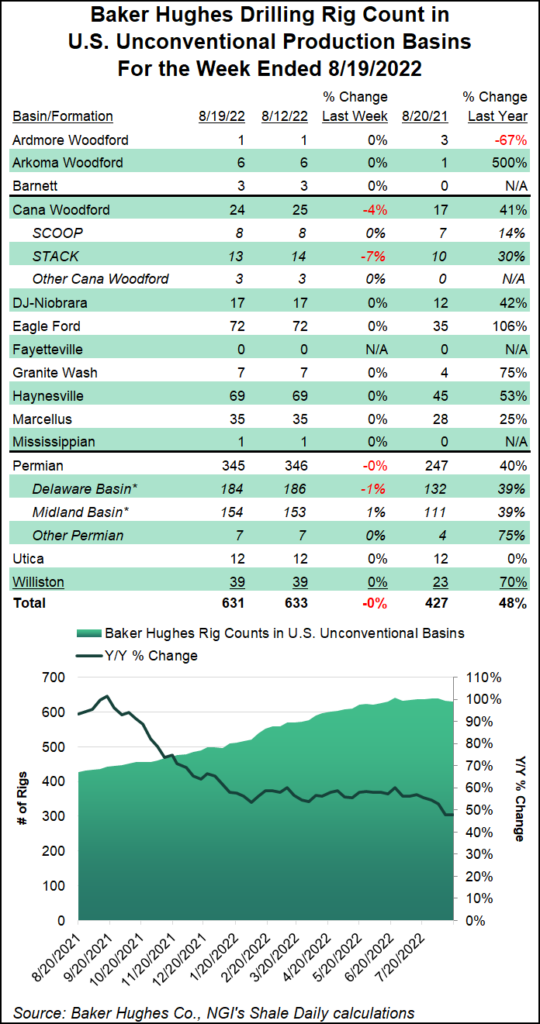 Total domestic natural gas-directed rigs declined by one to 159, while the oil-directed rig count held steady week/week at 601. The 762 active U.S. rigs as of Friday compares with 503 rigs running in the year-earlier period, according to the BKR numbers, which are based partly on data from Enverus.

Land drilling declined by one unit in the United States for the week, while the Gulf of Mexico count finished unchanged at 16. Horizontal units increased by one, while total vertical rigs were down two.

The Canadian rig count was similarly steady for the week, as no net change in either oil- or natural gas-directed activity saw total rigs running there remain flat at 201. That’s up from 156 in the year-ago period, the BKR data show.

Broken down by major drilling region, the Permian Basin count eased one unit lower to 345 for the week, versus 247 in the year-ago period. The Cana Woodford also dropped one rig from its total, falling to 24, up from 17 a year ago.

U.S. crude inventories fell by 7.06 million bbl for the week ending Aug. 12, a much larger draw than expected, the Energy Information Administration (EIA) said in its most recent weekly petroleum report.

EIA said the inventory declined compared to a build of 5.5 million bbl in the previous week. The American Petroleum Institute on Tuesday had estimated a crude draw of 448,000 bbl.

Meanwhile, natural gas production from seven key U.S. onshore regions is set to surge to slightly shy of 94 Bcf/d from August to September, with the largest share of incremental output growth expected from the Haynesville Shale, the agency said in a separate report published earlier in the week.