The domestic oil and gas patch turned in a relatively uneventful week in terms of net changes to drilling activity, according to the latest round of Baker Hughes Co. (BKR) data. 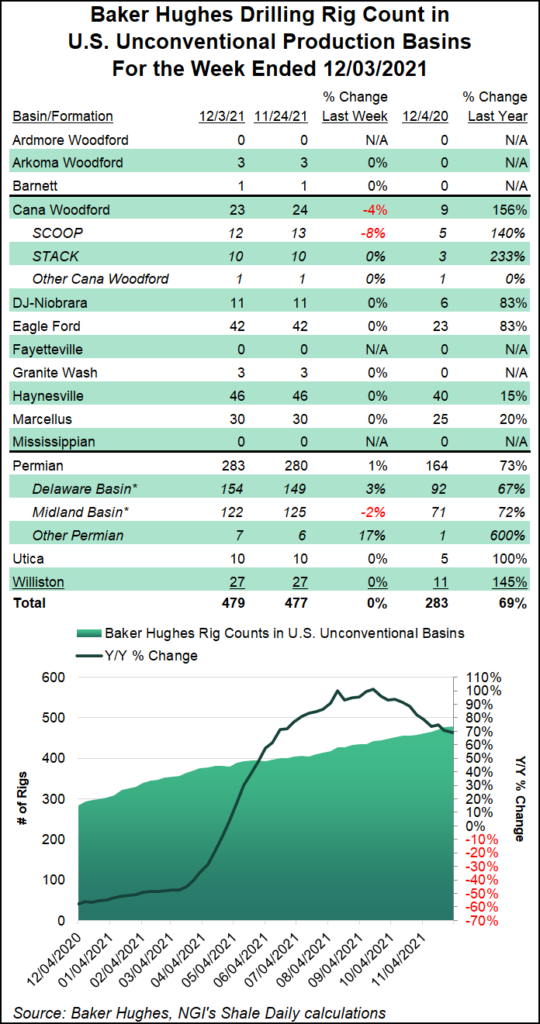 Both oil and natural gas rig counts went unchanged overall for the week ended Friday (Dec. 3), holding flat at 467 and 102, respectively. The combined U.S. rig count stood at 569 as of Friday, up from 323 a year ago.

Land drilling increased by two units overall, offsetting a two-rig decline in the Gulf of Mexico, according to the BKR numbers, which are based in part on data from Enverus.

Vertical rigs increased by three in the United States for the period, offset by a three-rig decrease in directional rigs.

The Canadian rig count climbed nine units to finish the week at 180, up from 102 in the year-earlier period. Gains included seven oil-directed rigs and two natural gas-directed units.

BKR’s state-by-state breakdown showed some shuffling around of units even as the overall tally went unchanged week/week.

New Mexico saw a net increase of five rigs for the period, reaching 88, versus 59 a year ago. Texas and Louisiana posted net declines of two rigs each, while one rig exited in California.

By major play, the Permian Basin added three rigs to raise its total to 283, up from 164 at this time last year. The Cana Woodford, meanwhile, dropped one rig to fall to 23 overall, up from nine in the year-earlier period.

The latest rig numbers come as the Saudi-led Organization of the Petroleum Exporting Countries (OPEC) and its Russia-led allies, collectively known as OPEC-plus, have signaled plans to boost production by 400,000 b/d in January, continuing a pace of monthly supply increases the cartel began in August.

OPEC-plus made its latest move as oil prices have faced bearish headwinds amid demand concerns linked to the potential further spread of the coronavirus Omicron variant.