Driven by strong growth in the Williston Basin, the U.S. oil and gas rig count climbed three units to 613 during the week ended Friday (Feb. 4), according to the latest figures published by oilfield services provider Baker Hughes Co. (BKR). 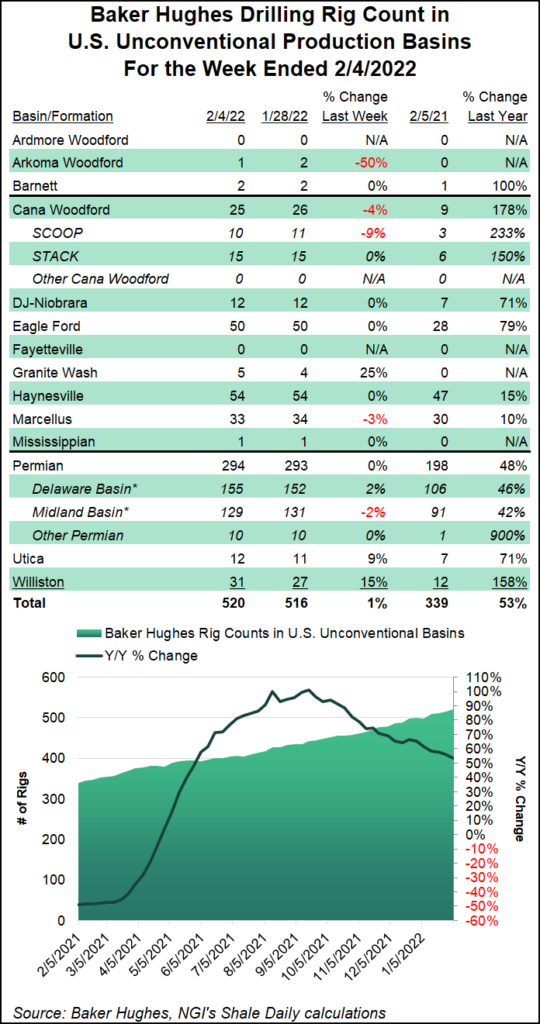 Gains in the United States included two oil-directed rigs and one natural gas-directed unit. The combined U.S. count ended the week 221 units ahead of its year-earlier total of 392, according to the BKR numbers, which are partly based on data from Enverus.

Land drilling increased by five units for the period, while the Gulf of Mexico count fell two units to 16, flat year/year. Three vertical units and two horizontal units were added during the week, partially offset by a two-rig decrease in directional drilling.

The Canadian rig count climbed one unit to 218, up from 171 a year ago, with the net change reflecting an uptick in oil-directed drilling for the period.

Broken down by major basin, the Williston posted the largest week/week gain, picking up four rigs to grow its total to 31, up sharply from 12 in the year-earlier period. Elsewhere among plays, the Granite Wash, Permian Basin and Utica Shale each added one rig to their respective totals. The Arkoma Woodford, Cana Woodford and Marcellus Shale each dropped a rig.

In the state-by-state count, BKR recorded gains of three rigs each in North Dakota and Texas, with Alaska adding two rigs for the period to end with eight overall. Ohio and West Virginia each added one rig for the period.

On the other side of the ledger, Louisiana, New Mexico and Pennsylvania each saw two rigs exit week/week, while California and Oklahoma each posted one-rig declines for the period, the BKR numbers show.

Citing robust demand and fading pandemic worries, policymakers from the Organization of the Petroleum Exporting Countries (OPEC), headed by Saudi Arabia, and a Russia-led group of allies known as OPEC-plus, said recently that they aim to boost output by 400,000 b/d next month.