Amid some minor adjustments to drilling totals at the regional level, including a small downtick in the Haynesville Shale, the overall U.S. rig count finished the week ended Friday (June 3) unchanged at 727, according to the latest tally from Baker Hughes Co. (BKR). 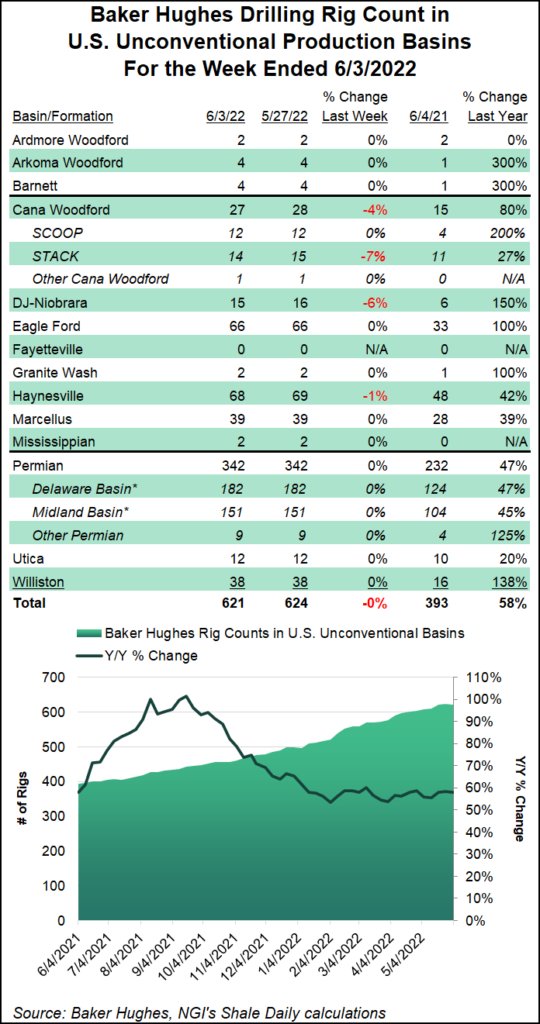 Both oil- and natural gas-directed drilling totals were unchanged domestically for the period. Land drilling was steady at 710, and the Gulf of Mexico count also held flat at 15. The combined 727 active U.S. rigs as of Friday compares with 456 rigs running in the year-earlier period, according to the BKR numbers, which are partly based on data from Enverus.

The Canadian rig count, meanwhile, jumped 14 units higher to end the week at 117, versus 77 in the year-ago period. A net increase of 17 oil-directed units there was partially offset by a three-rig decline in natural gas-directed drilling.

In the regional breakdown, among major basins, the Cana Woodford, Denver Julesburg-Niobrara and the Haynesville each saw one-rig declines for the week.

With the quarter now in the rearview mirror, a myriad of questions remains to determine the direction of U.S. activity this year by the E&Ps and oilfield services companies. Inflation, labor and supply chain issues are delaying some activity. However, will shunning Russian gas and oil lead U.S. companies to ramp up?

U.S. oil production totaled 11.9 million b/d for the week-earlier period, a peak level for the year but flat with the prior two weeks. Output remains more than 1 million b/d below the pre-pandemic highs of early 2020 as producers try to strike a balance between the investor demands and global calls for more oil.