The United States accounted for all of the world’s new liquefied natural gas (LNG) production capacity last year, as exports grew despite challenges created by the Covid-19 pandemic, according to the 12th annual World LNG Report by the  International Gas Union (IGU). 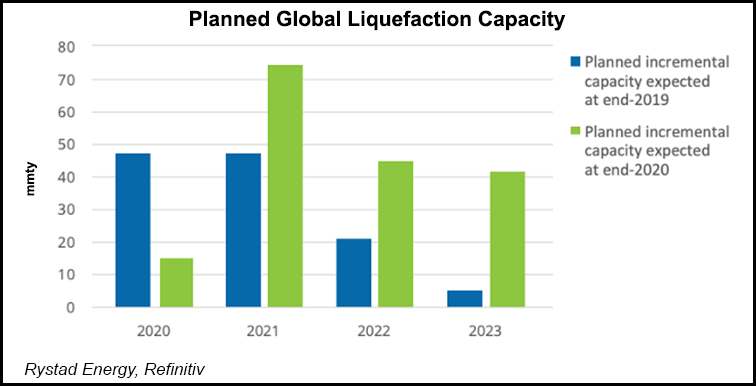 Cameron, Freeport and Elba Island LNG added 20 million tons (Mt) of annual LNG capacity in 2020. Several global projects with planned commercial start-up in 2020 were delayed to 2021 because of the virus. However,  for the third straight year, liquefaction capacity slightly outpaced new regasification at import terminals, which added 19 Mt of capacity.

“The gas industry has held its own, said IGU President Joe Kang. “Despite having to overcome many challenges in supply chain management, maintenance and commercial matters, secure and reliable supply of gas continued uninterrupted.”

Rystad Energy, which partnered with the IGU to produce the report, had forecast the global LNG trade to grow by 8% year/year in 2020, but Covid-19 curbed the growth rate to only 1%. Still, LNG was still “one of the few commodities that showed growth in 2020,” IGU noted.

With the ongoing rise in LNG trading, regasification capacity additions are expected to continue in established regions and new import markets. The world’s annual regasification capacity is currently 850.1 Mt. As of February, IGU said there was 147.3 Mt of annual capacity under construction, including 19 onshore terminals, 10 floating offshore units and eight expansion projects.

IGU said Asia continued to import the most LNG in 2020, accounting for 70% of all global imports. The region also accounted for most of the growth in imports with the addition of 9.5 Mt of net LNG imports versus 2019. China drove the additions by providing 7.2 Mt of new net import demand.

The world’s LNG suppliers utilized 74.6% of their liquefaction capacity on average last year as they battled through swings in demand amid the pandemic. For example, IGU said U.S. gas exports fell by 70% from May to August, mostly driven by curtailments at Cheniere Energy Inc.’s Sabine Pass and Corpus Christi terminals.

Trade flows toward Asia regained some ground in 3Q2020 as demand in China and India outweighed a decrease in shipments to Japan and South Korea. “This can be attributed to lower overall utilization rates in the larger importing nations due to an overall drop in global gas demand, allowing for opportunistic buying,” IGU said.

The pandemic’s impact was offset by an abnormally cold winter in the Northern Hemisphere, which drove prices in Europe and Asia to record highs. IGU noted that the JKM benchmark started 2020 at $5.26/MMBtu before falling to $1.82 in April 2020.

Last January, JKM spot prices were assessed at $32.50 because of historic demand. The winter left storage inventories short in Europe and Asia, which has partly contributed to stronger global gas prices this spring.