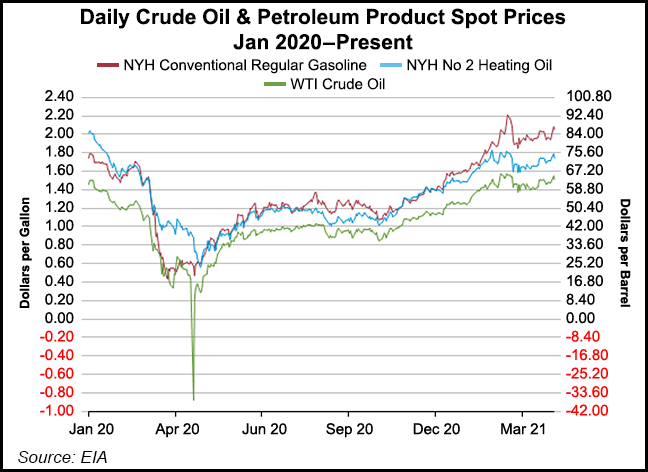 It also marked the first decline in three weeks and the biggest drop since January. It materialized as imports plunged in the week ended April 30, following weeks of increases, EIA said in its Weekly Petroleum Status Report (WPSR).

At 485.1 million bbl, inventories are 2% below the five-year average.

Domestic production, meanwhile, averaged 10.9 million b/d last week, flat with the prior week and down about 1.0 million b/d from the year-earlier level, the agency said.

Total petroleum demand declined 3.5% last week, as gasoline consumption tapered off from recent 2021 highs. But overall petroleum demand is notably stronger than it was amid the immediate throes of the pandemic last spring, and it was about 30% higher in the April 30 week from a year earlier, the WSPR shows.

Analysts said domestic demand is picking up as coronavirus vaccination programs advance. More than 40% of the U.S. population is fully inoculated, the Centers for Disease Control and Prevention said this week. Expectations are mounting for a global demand surge this summer as vaccinations grow more widespread across Europe and Asia, paving a path for a rebound in international travel and a jump in demand for jet fuel.

Oil prices have rallied in recent weeks on such expectations, with both Brent and West Texas Intermediate prices hovering around their highest levels since 2019. Both made further gains after the EIA data was released Wednesday morning.

While oil prices are strong, Dickson added, economic incentive remains to draw down storage this spring “instead of waiting for a higher oil price in the future.”

In a sign other countries are bracing for increased demand, U.S. crude exports surged to 4.1 million b/d last week, up 62% from the previous week and reaching the highest level since before the pandemic in early 2020.

Anticipating greater demand, the Organization of the Petroleum Exporting Countries and its allies, aka OPEC-plus, this month launched a production increase program that could add more than 2 million b/d into the market by July.

Citing expectations for travel and consumption of transportation fuels to increase, OPEC recently forecasted crude demand rising by 5.95 million b/d this year. The cartel did caution, however, that virus outbreaks in India and other parts of the world add uncertainty to projections.

Separately, the International Energy Agency recently raised its forecast for global oil consumption this year by 230,000 b/d to an increase of 5.7 million b/d. The Paris-based organization estimated oil demand in 2021 would reach 96.7 million b/d.

Against the improving demand backdrop, Raymond James & Associates analyst Pavel Molchanov said his team expects “further uplift” in oil prices “in the latter half of 2021, en route to a cyclical peak in 2022.”