Oil output in the United States declined for a second consecutive week, dashing hopes that production would keep pace with summer demand and ease pressure on inventories and prices. 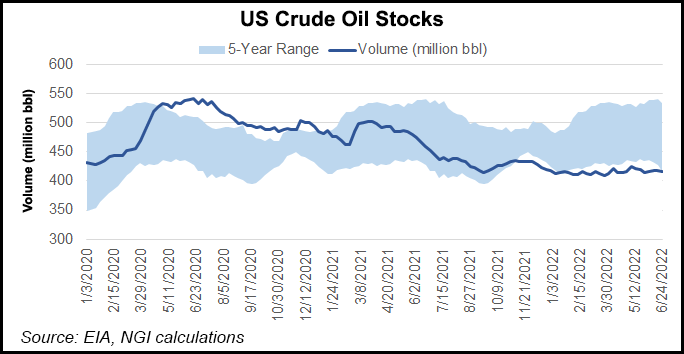 U.S. production is more than 1 million b/d below the pre-coronavirus peak, while overall petroleum demand is rising alongside summer travel, according to EIA’s Weekly Petroleum Status Report.

A persistent supply/demand imbalance in the United States and globally powered a surge in oil and fuel costs this year. In response, President Biden has called on producers to ramp up activity even as his administration simultaneously presses exploration and production companies to invest in a mid-range future when fossil fuels are steadily replaced by renewable sources of energy.

Producers are trying to walk a tightrope, balancing politicians’ calls to combat climate change against consumer and industrial demand for more crude. To date, the demand side of the equation is showing more momentum, and prices remain elevated as a result. While off from the year’s peak above $120/bbl, international benchmark Brent crude remains well above $100 this week, up more than 30% since the start of 2022.

EIA said U.S. commercial crude inventories for the July 15 period, excluding those in the Strategic Petroleum Reserve, declined by 400,000 bbl from the previous week. At 426.6 million bbl, stocks are about 6% below the five-year average.

With domestic supply growth precarious, Biden traveled to Saudi Arabia last week in part to lobby the Kingdom to drive up production in the Middle East. Saudi Arabia-led OPEC and allies known as OPEC-plus have yet to formally respond with action.

But analysts have pointed out repeatedly that members of the cartel have struggled this year to meet production targets because of aging infrastructure, political strife and war.

OPEC-plus, prior to the Biden visit to Saudi Arabia, targeted output growth of 648,000 b/d in July and August. It marked an increase from the roughly 430,000 b/d jump it targeted for June. But the group acknowledged that it fell short of its June goal, and its targets for the summer also may prove too aggressive.

On the consumption side, OPEC forecast global oil demand growth of 3.4 million b/d in 2022. That would push average demand for the year to 100.3 million b/d.

Next year, the cartel said, projected demand growth of 2.7 million b/d would lift the annual average to 103.0 million b/d.

Production, meanwhile, is on track to fall short of 100 million b/d this year.

OPEC researchers said their demand outlook was “supported by a still solid economic performance in major consuming countries, as well as improved geopolitical developments and containment of Covid-19 in China.”