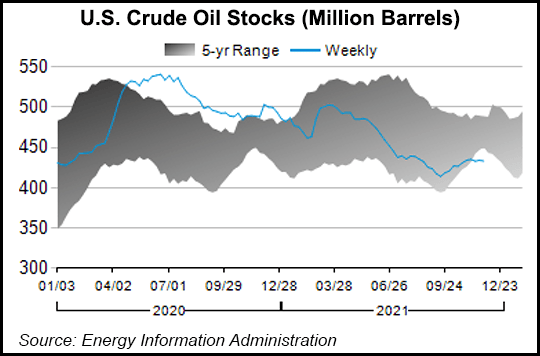 Production for the week ended Nov. 26 rose to 11.6 million b/d, up 100,000 b/d from the prior week and far ahead of the 11.1 million b/d a year earlier. Output has climbed in recent weeks after a run-up in oil prices earlier in the fall and calls for more supplies to balance the market in the wake of strong demand for travel fuels over the summer.

Demand, however, has been uneven this fall because gasoline costs surged. Prices at the pump hit seven-year highs in November, according to AAA, curbing consumption. Overall demand for the latest EIA period dropped 7% week/week, with gasoline consumption down 6% despite travel for the Thanksgiving Holiday.

That noted, demand overall remains well above year-earlier levels, with consumption up alongside increased economic activity and a rebound in travel from the shocks of the coronavirus pandemic.

As such, with pump prices high, the United States has increased imports in an effort to fortify supplies. U.S. crude imports averaged 6.6 million b/d last week, up by 168,000 b/d from the previous week. Over the past four weeks, imports averaged 6.3 million b/d, 19% more than the same period last year.

The United States is also drawing down stocks. Oil inventories, excluding those in the Strategic Petroleum Reserve (SPR), decreased by 900,000 barrels from the previous week. At 433.1 million barrels, stocks are 6% below the five-year average, EIA said.

The draw, however, was “the only bullish number of any significance” in the latest EIA report, said Mizuho Securities USA LLC’s director of Energy Futures, Robert Yawger.

With inflation worries intensifying, U.S. President Biden said last week his administration would release 50 million bbl of crude from the SPR in a coordinated effort with China, Japan, India and other countries to bolster global supplies.

Analysts said the move could evoke an unwanted response from the Organization of the Petroleum Exporting Countries (OPEC) and its Russia-led allies known as OPEC-plus. The cartel is scheduled to decide on production levels during a meeting on Thursday.

OPEC-plus began in August to increase production at a 400,000 b/d monthly pace. Saudi Arabia-led OPEC has said that, if increases continue at that level and the coronavirus does not intensify anew, supply/demand balances should align in the first half of 2022.

But now that U.S. production shows signs of climbing and the new Omicron variant threatens to cause fresh virus outbreaks that could dampen demand, the cartel could pause its monthly increases, Rystad Energy analyst Louise Dickson said.

December OPEC-plus meetings “are generally a milestone event during which the group sets the tone for next year, giving markets an insight into what the future might hold for the global supply of oil,” Dickson said. “The new Omicron variant and the coordinated SPR releases are both surprising and bearish market upsets that could impact members’ outlooks for 2022.”

While recovering some ground in intraday trading Wednesday, international benchmark Brent crude prices are lower this week, following a decline over the course of November.

“Markets are now pricing the worst for global oil demand as there is extreme uncertainty about the Omicron variant,” Enverus Intelligence Research Vice President Al Salazar said. Potential “travel restrictions combined with knock-on economic effects are now shifting the risk on oil prices decidedly to the bearish side.”