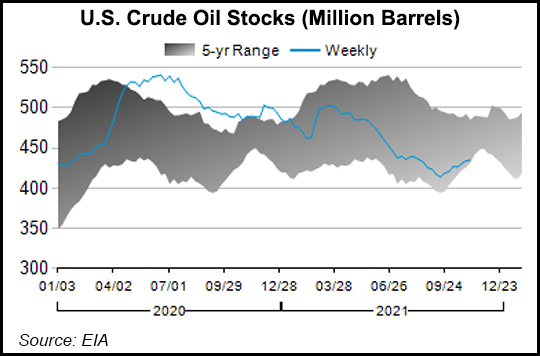 The U.S. Energy Information Administration (EIA) said Wednesday crude inventories for the week ended Nov. 5, excluding those in the Strategic Petroleum Reserve (SPR), increased by 1.0 million bbl from the previous week. In the final two weeks of October, supplies increased by 7.6 million bbl.

Output has climbed following a robust summer of demand and amid a tight global supply picture in the aftermath of the coronavirus outbreaks that curtailed production in 2020. Production last week held even with the prior period at 11.5 million b/d. That was up from 11.3 million b/d for the week ended Oct. 22 and well above the 10.5 million b/d level of a year earlier, EIA reported in its Weekly Petroleum Status Report.

Why Was Oil Demand Lower?

In fact, domestic demand is substantially higher than it was last year at this time and roughly on par with pre-pandemic levels in 2019, analysts at ClearView Energy Partners LLC noted.

At the same time, they added, U.S. production last week was still 1.6 million b/d below the 2020 peak reached in early March before the coronavirus was declared a pandemic.

The result: At 435.1 million bbl, U.S. oil inventories are about 7% below the five-year average.

Globally, similar disparities persist. The Organization of the Petroleum Exporting Countries (OPEC) predicted that world oil consumption would grow by 5.8 million b/d in 2021 and another 4.2 million b/d next year, reaching an average of about 100 million b/d. That would put demand on par with 2019 levels.

Output is rising, led by OPEC and allied oil-producing countries. The collective cartel, known as OPEC-plus, began in August to increase production at a 400,000 b/d monthly pace. OPEC officials have said if increases continue at that level and the coronavirus does not intensify anew this winter, supply/demand balances should align in the first half of 2022.

In the meantime, however, consumer prices at the pump and at the airport may remain lofty. With American producers under pressure from investors to conserve capital, U.S. President Biden has publicly pressured OPEC-plus to ramp up crude output further to rein in energy inflation. Still, the cartel last week declined, saying the pandemic remained too much of a glaring wildcard to boost output further.

Rystad Energy analyst Louise Dickson said the Biden administration could release oil from the SPR. This could have some impact on U.S. fuel prices, she said, but it would not address global imbalances.

“High gasoline prices are often politically unpopular, so a Biden intervention to appease the American consumer is politically logical but may not have a lasting fundamental physical impact on oil prices,” Dickson said.

The official “maximum effective drawdown rate of the SPR is technically 4.4 million bbl for up to 90 days, but in a 2016 report, the U.S. Department of Energy concluded that the maximum drawdown rate could in fact be much lower — 2 million b/d lower,” Dickson added.

What’s more, she said, “the voyage time from the U.S. Gulf Coast to Europe is around 20 days, and to reach Asia nearly 60 days. In addition, any oil drawn from strategic reserves would have to be pulled out of caverns at 2,000 to 4,000 feet below the surface and then sold into the marketplace, a process that takes multiple weeks.”