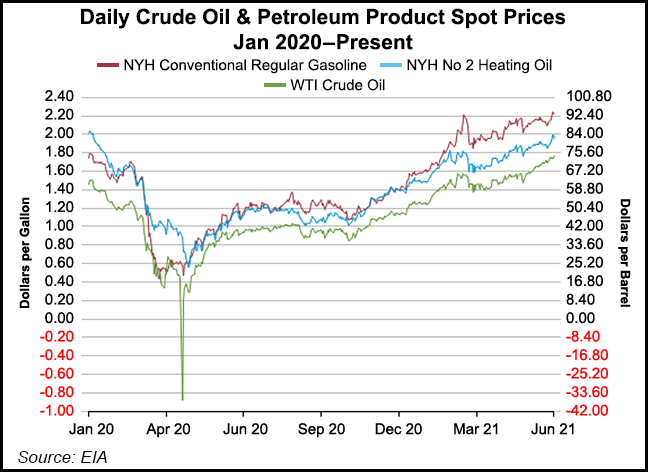 Excluding those in the Strategic Petroleum Reserve, crude stocks plunged by 6.7 million bbl during the week ended June 25, EIA’s Weekly Petroleum Status Report showed. That followed a 7.6 million bbl drop the prior week.

At 452.3 million bbl, U.S. inventories are about 6% below the five-year average and are at the lowest level since prior to the pandemic.

Overall petroleum demand increased 1% week/week – following several weekly increases over the spring and early summer. At 20.9 million b/d for the June 25 week, demand hit its highest level since the week ended March 30, 2020 – just as the pandemic was beginning to take hold.

West Texas Intermediate crude hovered around $73/bbl in intraday trading Wednesday after the EIA data was released. That was near its highest level since prior to the pandemic.

The EIA report came a day ahead of a meeting of policymakers from the Organization of the Petroleum Exporting Countries (OPEC) and its oil-producing allies, aka OPEC-plus. They are scheduled to decide on Thursday whether to raise output in the face of rising demand and flat U.S. production.

OPEC researchers said this month that demand could exceed supply by 1.5 million b/d in August and widen further to 2.2 million b/d before the end of 2021 – absent new production increases.

The cartel is currently adding more than 2 million b/d into the global market, a process started in May and scheduled to carry through July. Early market expectations are for an additional 500,000 b/d production boost in August.

OPEC-plus cut output by 9.7 million b/d early last year after the pandemic froze travel. Cartel additions made since oil demand started to recover last summer will total about 4 million b/d at the end of July.