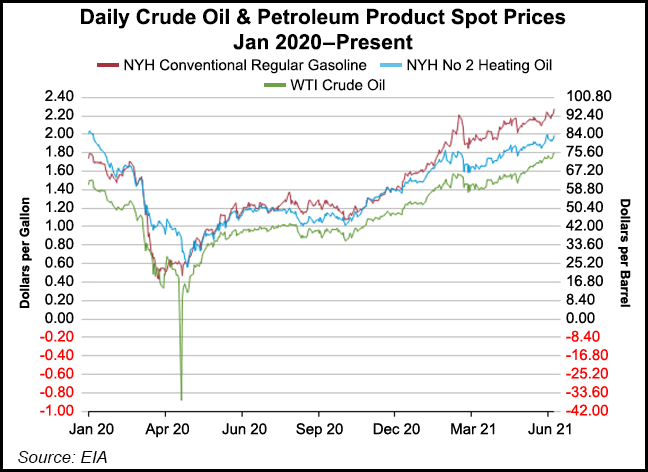 At 445.5 million bbl, domestic stockpiles were about 7% below the five-year average and 94% below the year-earlier level, when supplies were high amid the pandemic’s crippling effect on travel in 2020. Stocks reached a 2021 low last week.

Motor gasoline inventories decreased by 6.1 million bbl last week and were 2% below the five-year average.

Total domestic stocks dropped by 6.7 million bbl during the week ended June 25, and by 7.6 million bbl the week before that.

Overall petroleum demand, meanwhile, increased 3% week/week on the heels of  several weekly increases over the spring and early summer. At 21.5 million b/d for the July 2 week, demand hit its highest level since the onset of the pandemic.

Motor gasoline consumption topped 10 million b/d last week, up 9% from the prior week, marking a high for the year.

Total petroleum demand over the last four-week period averaged 20.9 million b/d, up by 18% from a year earlier. Over the same period, motor gasoline consumption was up 13% and distillate fuel demand jumped 18%. Jet fuel consumption soared 82%.

The hikes in demand come as coronavirus vaccines prove effective and more Americans travel. At the same time, with production holding well below pre-pandemic levels in both the United States and globally, supply/demand imbalance concerns are mounting.

The Organization of the Petroleum Exporting Countries and its allies, aka OPEC-plus, last week discussed whether to raise output by about 400,000 b/d each month from August to December. However, talks broke down amid objections by OPEC member the United Arab Emirates (UAE). The UAE said it had tabled a third of its output as part of previous cartel production cuts and should now be allowed to raise output more than others to compensate.

Other OPEC countries and their partners did not agree, and the group failed to broker a deal. That has left global supply in limbo just as demand is expected to continue surging. Lower 48 producers have maintained a conservative posture, resisting temptation to capitalize on the 2021 oil price recovery in favor of containing costs.

Brent crude prices, the international benchmark, have climbed more than 40% this year, topping $76/bbl at the peak.

OPEC-plus ministers were reportedly continuing to discuss output increases for next month and beyond, but they had not publicly set a target date for resolution. “The longer talks drag on, the less likely a deal gets done,” said Mizuho Securities USA LLC’s Robert Yawger, director of energy futures.

OPEC-plus slashed output by 9.7 million b/d early last year after the coronavirus curtailed demand. The cartel is currently adding more than 2 million b/d into the global market, a process started in May and scheduled to carry through July. Increases by the group since oil demand started to recover last summer will total about 4 million b/d at the end of July.

However, without further production bumps after July, OPEC researchers said demand could exceed supply by 1.5 million b/d in August and widen further to 2.2 million b/d before the end of 2021.

Absent an OPEC-plus deal, markets were concerned that the UAE and other countries may  operate outside the cartel’s governance and begin to boost output aggressively, driving down prices, Rystad Energy analyst Louise Dickson said.

“Unregulated output could mean freedom for all to produce as much as each country sees fit and would be an extremely bearish development for a market that got used to rules and supply quota,” Dickson said.