Despite a second straight uptick in production and a rare weekly decline in demand this summer, U.S. crude oil inventories plunged notably for a fourth consecutive week, according to the U.S. Energy Information Administration (EIA). 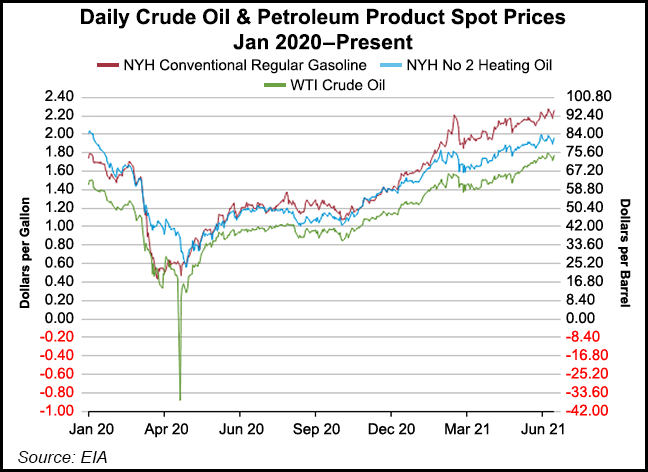 U.S. commercial crude inventories — excluding those in the Strategic Petroleum Reserve — decreased by 7.9 million bbl in the July 9 week from the previous week, the EIA said. The decline extended more than two months of draws overall and pushed oil stocks to 437.6 million bbl, 8% below the five-year average, EIA’s Weekly Petroleum Status Report showed. The decline reflected demand momentum over the past several weeks, and an expectation that it would continue through the summer.

Overall petroleum demand, meanwhile, decreased 10% week/week, reflecting an inevitable post-Fourth of July holiday decline, analysts at ClearView Energy Partners LLC said. “Drivers stocking up for a three-day weekend could enhance demand and a four-day week could tamp it down,” the analysts said, noting that the latest EIA covered week included one fewer workday than normal.

Leading up to the July 4 holiday, demand increased to 21.5 million b/d for the July 2 week, its highest level since the onset of the pandemic. That followed several weekly increases over the spring and early summer.

Demand over the past month proved robust.

Meanwhile, key members of the Organization of the Petroleum Exporting Countries and its allies, aka OPEC-plus, reportedly reached a compromise on Wednesday to increase production beginning in August. The cartel slashed output by 9.7 million b/d early last year after the coronavirus curtailed demand.

Saudi Arabia-led OPEC and its allied group of leading producers headed by Russia earlier this month discussed whether to raise output by about 400,000 b/d each month from August to December. However, the talks fell apart amid objections from OPEC member the United Arab Emirates (UAE). The UAE said it had tabled a third of its output as part of previous cartel production cuts and should get a green light to increase output more than other members to compensate.

Several media outlets on Wednesday reported Saudi Arabia and the UAE had reached a compromise that would allow the latter to increase its production to 3.65 million b/d in 2022. The cartel overall would proceed with a 400,000 b/d monthly increase next month. The UAE had lobbied to boost its output to 3.8 million b/d from 3.2 million b/d, the Wall Street Journal reported.

“We find it more likely than not that OPEC-plus will raise production in August,” given mounting demand this summer, Rystad Energy analyst Louise Dickson said Wednesday. “With more than 8 million b/d of spare capacity, 2 million b/d of which is in Saudi Arabia, there is room for maneuvering.”

The Saudi Arabia-UAE deal, however, is subject to the approval of OPEC-plus producers at their next meeting – a date for which had not yet been set as of Wednesday afternoon.

The cartel is currently adding more than 2 million b/d into the global market, a process started in May and scheduled to carry through July. Increases by the group since oil demand started to recover last summer would total about 4 million b/d at the end of July.

The shift to greater output comes as coronavirus vaccines prove successful and demand for travel fuels derived from oil mounts across North America, Europe and parts of Asia.

OPEC researchers said in June that, absent further substantial production increases, global demand could exceed supply by 1.5 million b/d in August and widen further to 2.2 million b/d before the end of 2021. They cautioned, however, that the Delta variant of the coronavirus had wreaked havoc in parts of Asia and threatened to interrupt economic momentum in parts of Europe as well, making demand predictions precarious.