Domestic oil inventories declined for a second consecutive week, falling by 400,000 bbl during the period ended May 7 and keeping stocks below the five-year average, the U.S. Energy Information Administration (EIA) said Wednesday. 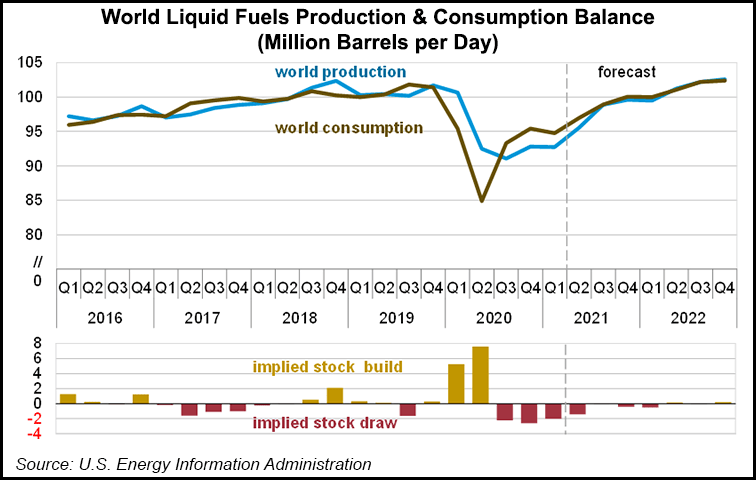 Stocks plunged by 8.0 million bbl — excluding those in the Strategic Petroleum Reserve – a week earlier as year/year demand mounted alongside declining coronavirus cases, more economic activity and increased consumption of travel fuels over the past month.

At 484.7 million bbl, U.S. crude oil inventories were about 2% below the five-year average at the end of last week, EIA said in its Weekly Petroleum Status Report (WPSR).

The recent draws from stocks likely reflected accumulating demand over the last several weeks, as consumption actually tapered off last week. Overall demand for the May period 7 period dipped 11% week/week.

Refineries operated at 86% of their operable capacity last week, on par with pre-pandemic levels.

“Working storage fell to 57.6% of capacity, by our estimate – 2 percentage points below” the comparable week in 2019, prior to the pandemic, analysts at ClearView Energy Partners LLC said.

Withdrawals from stocks may have been greater had domestic output and imports not increased last week.

U.S. crude production for the latest week increased 100,000 b/d week/week to 11.0 million b/d, according to the WSPR. Output was roughly 2 million b/d below the 2020 peak, reached in early March before coronavirus outbreaks, and 600,000 bbl below year-earlier levels.

[Natural Gas 101: Tune into NGI’s Hub & Flow podcast and catch an insightful interview with Charles Blanchard, the author of the recently published “The Extraction State: A History of Natural Gas in America.”]

Additionally, after surging 62% to 4.1 million b/d in the final week of April — the highest level since prior to the pandemic — U.S. crude exports scaled back to 1.8 million b/d last week.

Separately, the International Energy Agency (IEA) on Wednesday said it forecasted global oil demand would rise by 5.4 million b/d in 2021. That was 270,00 b/d lower than a previous forecast last month due in large part to a surge in virus cases across heavily populated India.

But IEA said in its monthly Oil Market Report it anticipates a burst in demand in the second half of 2021 “on expectations that vaccination campaigns continue to expand and the pandemic largely comes under control.”

The Paris-based agency said world oil supply, meanwhile, rose 330,000 b/d to 93.4 million b/d in April and likely will jump further in May as the Organization of Petroleum Exporting Countries (OPEC) and its allies begin to boost output this month. The OPEC-led shift is part of a three-month effort to raise production ahead of expected jumps in demand this summer and into the fall.

Despite the increase, the agency said, supplies likely “won’t rise fast enough to keep pace with the expected demand recovery. As vaccination rates rise and mobility restrictions ease, global oil demand is set to soar” from 93.1 million b/d in 1Q2021 to 99.6 million b/d by year-end.

Brent crude oil prices jumped in intraday trading after the IEA report was released. “The positive demand outlook sentiment adds to the upside risk to prices,” Rystad Energy analyst Louise Dickson said, noting that OPEC a day earlier released a forecast for stronger oil demand in 2021, driven by expectations for increased economic activity.The cartel noted that coronavirus inoculation campaigns are gaining momentum across North America, Europe and parts of Asia. For 2021, world oil demand is expected to increase by nearly 6.0 million b/d from last year, or 7%, to average 96.5 million b/d, OPEC estimated in its Monthly Oil Market Report. That was unchanged from the prior month’s estimate.