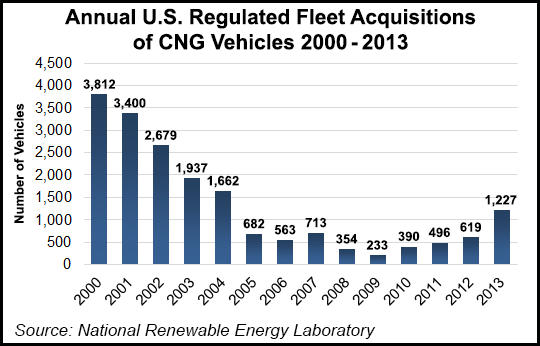 Noting expansion beyond the U.S. border as one of its top goals this year, Indianapolis-based CNG Source is looking to expand its services related to the fueling of CNG fleets and individual vehicles. NatGas is based in Queretario, Mexico, and serves a diverse array of natural gas vehicles (NGV).

Under the agreement, the U.S. firm will help NatGas deploy a monitoring and control system for managing multiple locations with extended equipment reading and control capabilities, a CNG Source spokesperson said.

NatGas CEO Josue Hernandez said his company is looking for continuous improvements in safety, efficiency, low operating costs and “simplicity.” He said CNG Source has “the right tools” to help NatGas “elevate its operating model and planning its station expansions.”

In St. Louis, A-B will have 73 Freightliner Cascadia sleeper trucks and 24 Cascadia day cabs, all with 160-diesel gallon equivalent CNG fuel cylinder arrays by Agility Fuel Systems. U.S. Gain CNG will provide the fuel for the Freightliner vehicles obtained from its outlet in Houston.

Noting that A-B has made a commitment to alternative fuels, Sembrot said the company expected a 23% reduction in greenhouse gas emissions from the transition to CNG, compared with diesel. A-B will use a CNG fueling station opened by U.S. Gain near its St. Louis brewery.

In California, the state energy commission (CEC) is planning a technology merit review to highlight key ingredients for development of biofuel and biomethane projects in Sacramento Sept. 18. It is part of the CEC’s Alternative and Renewable Fuel and Vehicle Technology Program, which awards tens of millions of dollars in grants annually for the development and refinement of alternative fuels, including renewable natural gas and biogas.

A number of CEC grant recipients will present “successes, lessons learned and pitfalls to avoid” from alternative fuel projects, a CEC spokesperson said. “This information can benefit existing and future projects and help the CEC adapt and improve future investment plans and solicitations.” The workshop will include comments from an independent peer reviewer of the projects.

Elsewhere, in Sweden reports for the first half of this year indicate that 73% of the fuel used in NGVs there comes from biogas. It is a historic high proportion, according to Energigas Sverige, the Swedish Gas Association. There are currently more than 52,000 NGVs operating in Sweden, according to the association’s report.

In Georgia, American Fueling Systems (AFS) will mark a three-year anniversary for its flagship CNG station in DeKalb County. The Sept. 9 event will be co-hosted by U.S. Gain’s fueling unit, Gain Clean Fuel, which is partnering with AFS in increasing the region’s alternative fuel footprint.

In Ohio, Trillium CNG opened a new CNG fueling station at the American Honda factory in Marysville, OH, and it has a second CNG station under construction in Troy, OH, which is slated to open in October.

While Honda announced earlier this year it was discontinuing production of its dedicated CNG Civic model sedan (see Daily GPI, June 16), it supports the use of CNG in trucks and wants to encourage its suppliers to use natural gas in their trucks, so it is providing a fueling facility at its plant. “Honda is not walking away from natural gas as a fuel,” one observer closely tied to the company told Fleets & Fuels newsletter.

Honda is hoping greater use of NGVs by its suppliers, who ship 8 million parts daily to the Marysville plant, and Honda’s own internal energy saving features at the plant, will reduce the company’s overall carbon footprint, said Tom Shoupe, executive vice president for Honda of America Manufacturing.

In Kentucky, American Natural Gas (ANG) has obtained Bestway Express trucking as its anchor tenant for a CNG station ANG is developing in Georgetown, KY. The station is scheduled to open in November as a 24/7 public access CNG fueling facility.

Columbia Gas is providing high pressure gas supplies to the station, which will have three fueling lanes and three card-reading Bennett dispensers fed by a pair of Cobey compressors with Xebec drying units. The ANG station will be located off Interstate Highway 75 north of Lexington and the I-64 interchange.

It will be the first public access CNG station in Georgetown, and ANG will build, own and operate it. “By partnering with Bestway on this station, we are changing the availability of alternative fuels in the area,” said ANG CEO Drew West. Bestway officials indicated they will start with 10 CNG-diesel dual fuel trucks and eventually will operate 30 in the area.