The U.S. Chamber of Commerce on Tuesday said it would help defend Trump administration updates to the National Environmental Policy Act (NEPA) that were designed to minimize reviews and hasten approvals of proposed infrastructure projects, including natural gas and oil pipelines. 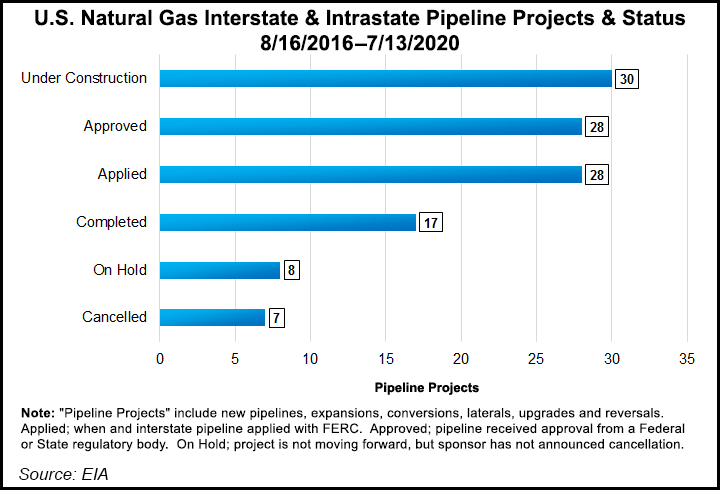 At issue is the White House Council of Environmental Quality (CEQ)’s overhaul of NEPA and new legal challenges to it before they are scheduled to take effect in September.

The White House reforms would narrow NEPA oversight using a new “nonmajor” category and redefine a “major federal action” to exclude privately financed projects with minimal government funding or involvement. As a result, federal agencies could more quickly approve infrastructure projects with limited oversight, and pipelines overseen by federal authorities could get fast-tracked.

In a lawsuit filed in July by Wild Virginia and 16 other groups against the CEQ in U.S. District Court for the Western District of Virginia, the plaintiffs argue that the CEQ’s final rule guts NEPA by “excluding a range of projects from any NEPA review, severely limiting the environmental effects that must be considered under NEPA, restricting which alternatives should be studied, and allowing projects to proceed before the NEPA process is complete.”

The CEQ, the lawsuit alleges, “has eviscerated the heart of the statutory scheme.”

Plaintiffs in a separate lawsuit in California make similar claims and argue that CEQ failed to consider and make public “significant environmental impacts” when finalizing the new NEPA rule. In the U.S. District Court for the Northern District of California, the Center for Biological Diversity and 19 other groups claim that the overhaul violates NEPA itself because it does not address the rule’s impacts on the environment.

Both lawsuits ask for the revised NEPA to be vacated.

The Trump administration, however, argued that the changes streamline infrastructure approvals and “reverse years of burdensome overregulation and administrative abuse.”

The Chamber, leading eight other associations, said the NEPA changes would “reduce delays associated with the permitting process while maintaining thorough reviews and public input.” It said, on average, it currently takes more than 4.5 years for a project to reach a NEPA decision.

“As we confront the dual threats of an economic crisis and climate change, it is more important than ever that reforms to NEPA are implemented,” said Ed Mortimer, vice president of transportation and infrastructure at the U.S. Chamber. “It will simply be impossible to build the infrastructure our nation needs — from telecommunications to roads and bridges to renewable energy — without the reforms the Administration has enacted.”

The Chamber said it had asked the court in Virginia for approval to intervene in the litigation.

“The government followed an extensive, three-year process in which almost 500,000 supportive comments were received,” Mortimer said. “While it is unfortunate that opponents to the rule are seeking to delay the permitting process for some of the very projects that would help improve the environment, we believe that the changes made were both consistent with the law and appropriate, and we’re hopeful that the court will grant our motion to allow us to participate in this case.”