Even partial success by a modest minority of Canadian and U.S. plans to enter global liquefied natural gas (LNG) markets would siphon off the supply gluts brought on by shale development, which has been depressing North American prices, according to a new forecast by experts on both sides of the border. 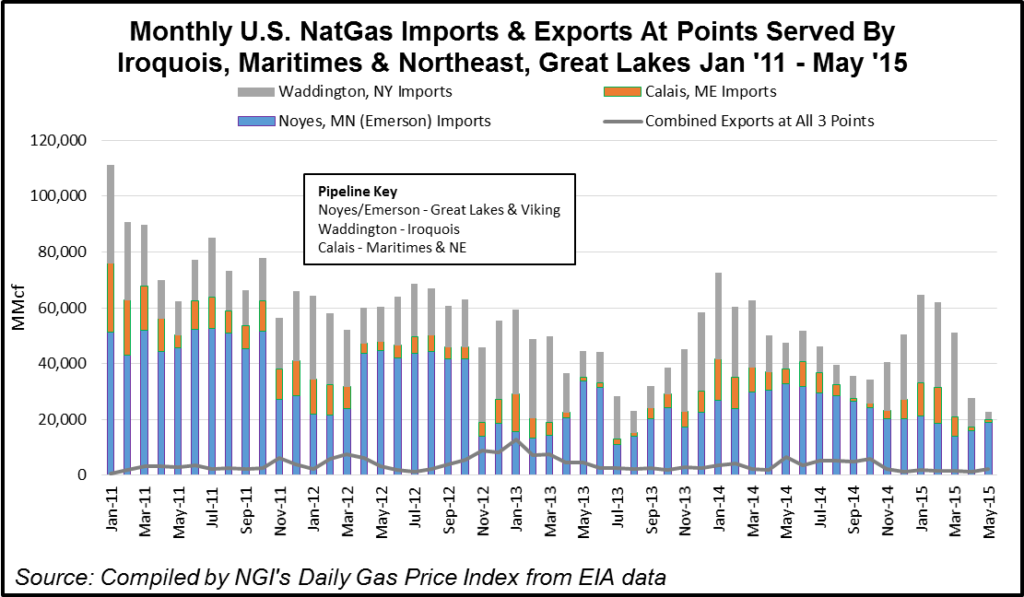 Only 15% of total exports sought by LNG schemes in Canada and the United States would ignite an industry recovery, said the report by the Canadian Energy Research Institute (CERI) in Calgary and Fairfax, VA-based ICF International.

The study, released Thursday under the title Western Canada Natural Gas 2015-35, paints a brightening outlook in a base case scenario described as plausible. CERI devised the forecast using an ICF computer model of the North American gas scene.

As of 20 years from now, the projection foresees overseas LNG exports of 20.8 Bcf/d: 14 Bcf/d from the U.S. and 6.8 Bcf/d from Canada. Most of the traffic would flow out of terminals proposed on the Gulf of Mexico and north Pacific coasts.

The overseas sales would be by a handful of successes emerging from the current lineup of 78 applications for exports of 138 Bcf/d under 138 licenses sought from the U.S. Department of Energy and Canada’s National Energy Board (NEB).

CERI and ICF do not name their selections of projects most likely to succeed. The sales campaign has 25 Canadian entries seeking LNG exports of 45 Bcf/d, while 53 U.S. license applications propose a total volume of 93 Bcf/d. Regulators in both countries continue to review proposals and grant long-term export permits at a stately pace.

The scenario anticipates “minimal growth” in domestic gas demand in the United States to 81.6 Bcf/d as of 2035 from the current average of 71.7 Bcf/d. But with LNG exports providing new support, U.S. production would climb to 112 Bcf/d over the next 20 years from 71 Bcf/d currently.

The scenario expects Canadian gains of 6.8 Bcf/d in LNG sales to be largely offset by growth in U.S. pipeline deliveries to the eastern provinces, with northbound American exports rising to 6.2 Bcf/d as of 2035 from the current level of 2.6 Bcf/d.

The Marcellus shale gas formation, a low-cost supply source near big eastern consumer areas in both countries, effectively backs western Canadian gas out of these markets,” the CERI-ICF outlook said.

Marcellus output is headed for doubling to 30 Bcf/d within 10 years, according to the scenario. The U.S. shale production tide would be strong enough to convert major Canadian export pipelines — Iroquois, Maritimes & Northeast and Great Lakes — into northbound conduits for U.S. exports.

Over the 20-year CERI-ICF forecast period Canada is expected to fall from former stardom as the world’s second-biggest gas exporter after Russia. Ahead lies also-ran status as just barely a “net exporter” in the country’s primary gas trade with the United States, with southbound pipeline deliveries across the border dropping to 6.2 Bcf/d or 40% below their peak less than a decade ago.

At the same time the CERI-ICF scenario foresees the United States growing from scratch a decade ago into a global gas-export force, with total pipeline sales to Canada and Mexico plus overseas LNG shipments rising nearly six-fold to 25.7 Bcf/d as of 2025.