With gains on land offsetting a pullback in Gulf of Mexico activity, the U.S. rig count added two units to finish the week ended Friday (April 9) at 432, according to the latest figures published by oilfield services provider Baker Hughes Co. (BKR). 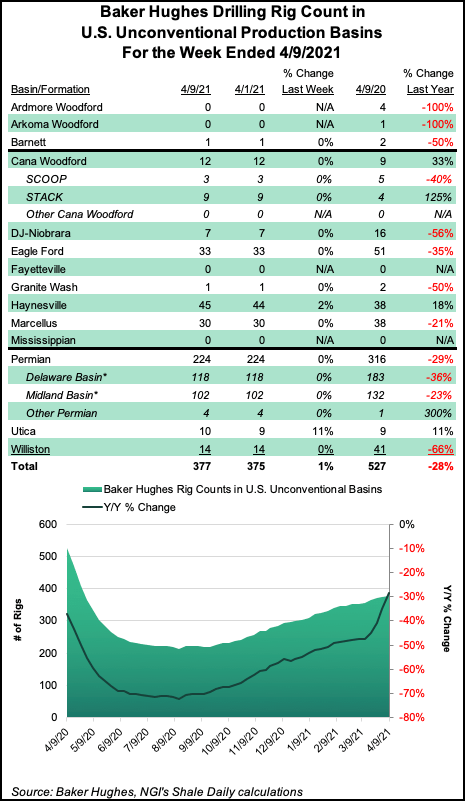 Two natural gas-directed rigs were added during the week in the United States, while oil-directed rigs remained unchanged overall at 337. The combined 432 domestic rigs compares with 602 rigs active in the year-ago period, according to the BKR numbers, which are based partly on data provided by Enverus.

The Canadian rig count dropped 11 units to fall to 58 for the week, up from 35 in the year-ago period. Declines included five oil-directed rigs and six natural gas-directed.

Among plays, there were no major net changes week/week in the updated BKR numbers. Reflecting the uptick in gas-directed drilling in the United States, the Haynesville and Utica shales each added a rig to their respective totals during the period.

Broken down by state, Utah added two rigs for the week, while Ohio and Oklahoma each added one. Louisiana and Wyoming each saw a net decline of one rig for the period.

Meanwhile, the global supply/demand balance should support crude prices near their current levels through 2021, though fluctuations are all but certain, Moody’s Investors Service said in a recent report.

The Moody’s analysts said average West Texas Intermediate crude prices this year should be in the middle of their forecast range of $45-65/bbl.

“We expect that the recovery in oil production will lag increases in demand and will accelerate a rebalancing of the physical markets,” the analysts said. Prices, however, “will remain highly volatile, with periods outside the top or bottom ends of the range.”