Another round of healthy gains in the oil patch pushed the U.S. rig count six units higher to 417 for the week ended Friday (March 26), according to data from oilfield services provider Baker Hughes Co. (BKR). 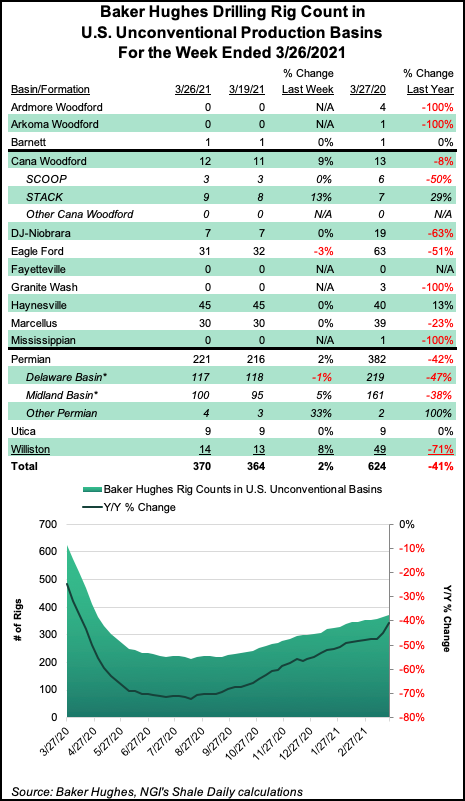 After adding nine rigs in the previous week, the domestic oil patch picked up an additional six rigs for the most recent week to finish at 324. Natural gas-directed drilling remained unchanged overall at 92 rigs. The combined 417 rigs for the period compares with 728 rigs active at this time last year, according to the BKR figures, which are based in part on data provided by Enverus.

Seven rigs were added on land in the United States, while one rig departed in the Gulf of Mexico. Eight horizontal units were added, along with one directional unit, offsetting a net decline of three vertical rigs.

The Canadian rig count dropped 11 units to end at 81, up from 54 in the year-ago period. Changes there included a net decrease of 10 oil-directed rigs and one gas-directed.

Broken down by major play, the Permian Basin enjoyed the lion’s share of the drilling gains for the week, picking up five rigs to raise its total to 221. The Cana Woodford and Williston Basin each added one rig week/week, while the Eagle Ford Shale saw a net decrease of one rig.

Broken down by state, Texas added three rigs overall for the week, while North Dakota, Oklahoma and Utah each added one. Louisiana posted a net decline of one rig for the period.

The latest activity gains in the Permian come as a recent survey by the Federal Reserve Bank of Dallas showed oil and natural gas activity sharply expanded during the first three months of the year in Texas, New Mexico and Louisiana.

Every quarter, the Dallas Fed, as it is better known, surveys executives of exploration and production firms and oilfield services companies headquartered in the Eleventh District. The district, which covers all of Texas, northern Louisiana and most of New Mexico, is home to the Permian, Eagle Ford and Haynesville shales.