New Mexico appeared to be the biggest beneficiary of rigs for the short week ending Wednesday (July 3), as U.S. operators added one natural gas rig and dropped five that were working the oil patch, according to Baker Hughes, a GE Company (BHGE). 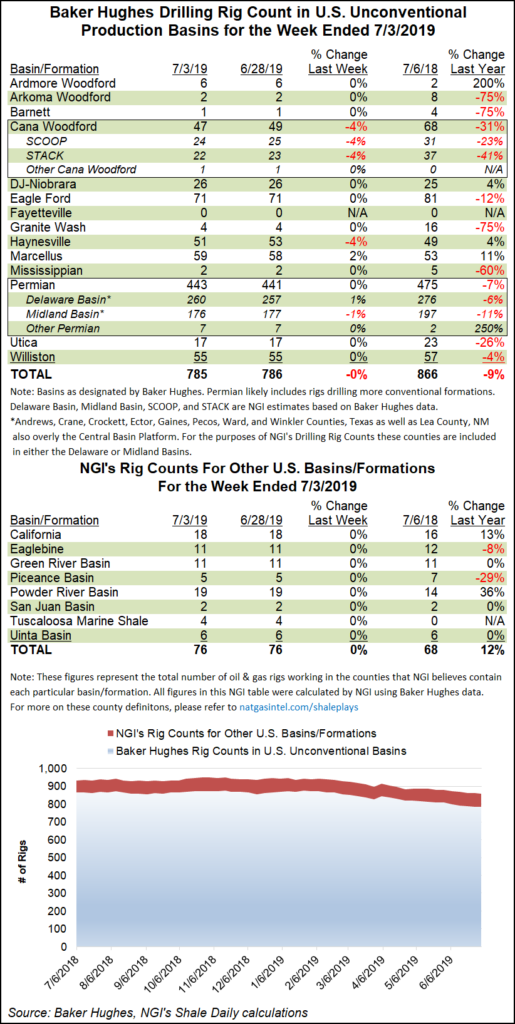 The domestic count ended at 963 total, sharply lower than the 1,052 running in the year-ago period. The Gulf of Mexico shed two rigs for the week, but at 24 total, the region is stronger than a year ago when 18 rigs were in operation.

Meanwhile, Canada’s natural gas rig count remained static from a week earlier at 40 but off from 56 a year ago. Four oil rigs were dropped to put Canada’s total at 80, a decline from 126 running in the same period of 2018.

Overall, the North American rig count stood at 1,083 as of Wednesday, down eight from a week earlier and a decline of 151 year/year.

In the United States, 788 oil rigs were in operation, down 75 year/year, and 174 gas rigs were working, a decline of 13 year/year. The miscellaneous rig count remained static at one; there were two in operation a year ago.

Horizontal rigs remain the option of choice for U.S. operators at 839, but one was dropped for the week and the count is down from 930 a year earlier. Another 58 verticals were working, also off one week/week but up from 55 year/year. In addition, 66 directional rigs were working the fields, down two from a week earlier and from 67 a year ago.

New Mexico, whose southeastern corner is a mob scene for Permian Basin operators, reported a three-rig gain for the week and for the year to end at 102.

Also showing strength was Alaska, which added two rigs week/week and from a year earlier to end at nine. West Virginia added one rig to put the count at 22, up five from a year ago.

States that lost rigs for the period were led by Oklahoma, down five to 97; Louisiana, off four to 68; and Texas, which dropped one rig to end the week at 463.

Most of the Lower 48 basins saw the rig counts remain static from a week earlier. However, New Mexico gains may have been the reason for the higher count in the Permian Basin, which added two for the week to reach 443.

The Permian count still is lower than the 475 in operation last year. The Marcellus saw one rig raised to end at 59, versus 53 a year ago.

Basins dropping rigs were the Haynesville Shale, down two to end at 59; there were 53 working a year ago. The Cana-Woodford in Oklahoma also lost two rigs to stand at 47, versus 68 a year earlier.