With activity ramping up on land and offshore, the U.S. rig count surged 13 units higher to 430 during the holiday-shortened week ended Thursday (April 1), according to data published by Baker Hughes Co. (BKR). 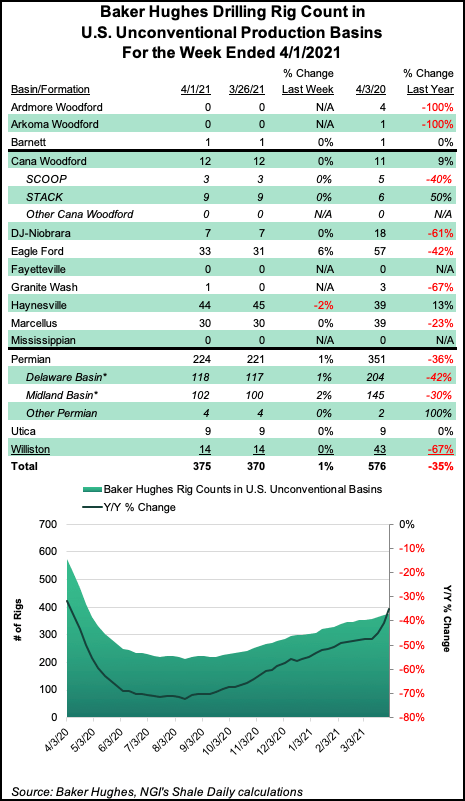 As has often been the case recently, the increase in domestic drilling for the week was driven by the oil patch. Thirteen oil-directed rigs were added in the United States, along with one miscellaneous unit. Those gains offset a one-rig decrease in natural gas-directed rigs.

The combined 430 rigs running as of Thursday compares with 664 rigs active in the year-ago period, according to the BKR numbers, which are based partly on data provided by Enverus.

Land drilling increased by 11 rigs for the week, while two rigs were added in the Gulf of Mexico. Eleven horizontal rigs and four directional rigs were added, partially offset by a decrease of two vertical units.

The Canadian rig count fell 12 units to end the period at 69, up from 41 a year ago. Changes included declines of seven oil-directed rigs and five gas-directed units.

Broken down by major play, BKR recorded a three-rig increase in the Permian Basin for the week, while two rigs were added in the Eagle Ford Shale. The Granite Wash saw a net increase of one rig, while one rig exited in the Haynesville Shale.

Broken down by state, Texas added four rigs, while New Mexico added three and Oklahoma and Utah each added two. Colorado, Louisiana and Pennsylvania each added one rig for the week, while West Virginia dropped one from its total, BKR data show.

The Texas upstream oil and gas industry added 2,300 jobs during February, still not back to its pre-pandemic levels, but slowly rising since last September, the Texas Oil & Gas Association (TXOGA) said recently.

Texas Workforce Commission data indicated that the upstream sector has added 7,400 jobs since the low point in September. Total upstream employment in Texas stood at around 164,900.

“The resilience and reliability of the Texas oil and natural gas industry is remarkable, and it is the reason this industry will be essential to the energy mix for decades to come,” TXOGA President Todd Staples said. “Every Texan should be encouraged that jobs in this vital sector are returning after a difficult season.”

Meanwhile, according to the latest Weekly Petroleum Status Report from the U.S. Energy Information Administration (EIA), domestic oil inventories decreased for the first time in five weeks as demand rebounded.

EIA said crude inventories — excluding those in the Strategic Petroleum Reserve — fell by 900,000 bbl from the previous week. Still, at 501.8 million bbl, U.S. stocks were 6% above the five-year average.