Two proposals for strengthening state-local oversight of oil/natural gas development that were approved by a Colorado task force were sent to the state legislature for consideration Friday, a spokesperson for Gov. John Hickenlooper told NGI‘sShale Daily. 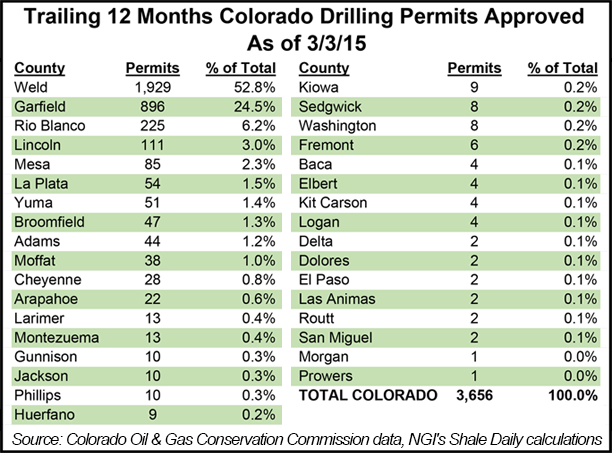 The two recommendations sent to lawmakers would increase staffing at the Colorado Oil/Gas Conservation Commission (COGCC) and have the legislature put into law methane rules (SB 15-100) adopted last year by the Air Quality Control Commission.

Four recommendations went directly to COGCC. Another, for reducing traffic near oil/gas well sites, does not require any changes in law or regulations. A recommendation to establish an oil/gas information clearinghouse was sent to Hickenlooper’s energy office, and a proposal to beef up staffing in the state public health department was sent to that agency.

Separately, the COGCC on Monday unanimously approved new rules for operators with facilities located within flood plains, following recommendations coming out of the commission’s “Lessons Learned” report a year ago, which was compiled after the devastating September 2013 floods. The nine-member COGCC approved regulations designed to better protect oil/gas facilities that may be subject to flooding.

In the just-concluded task force effort “everything was handled in a very professional way, and I respect the process,” a Weld County Commissioner and one of the task force members, Steve Moreno, told NGI’s Shale Daily. “There were points that we respectfully disagreed on, but I was honored to serve with the various members.”

As a representative from the county with the most active wells in Colorado, Moreno said he did not propose any of the recommendations voted on, but a number of them were recommendations he knew he would support.

“As a newly elected county commissioner, I have to say things are going very well here in Weld,” said Moreno, who was appointed to the task force as Weld’s county clerk. “I mentioned a number of times that 50% of the drilling and 80% of the state’s production is coming out of Weld County.”

Weld’s experience with the industry has been good, Moreno said, but “there is always room for more improvement.”

Moreno said he does not see the need for more state laws, noting that Colorado already has some of the strictest oil/gas regulations in the nation. “I’m not sure more regulation would be needed for more improvements,” he said.

Moreno said he can empathize with some task force members who did not get their suggestions adopted in the final round. However, some were withdrawn during the final vote and others were combined, so there were not as many ideas that failed to get a two-thirds vote as it appears.

Weld County does not have some of the problems that other jurisdictions may have run into, Moreno said, adding that some of the nine recommendations are already being implemented in Weld. “I think all task force members wanted to make sure we maintained the quality of life we have enjoyed in Colorado,” he said. “Everyone had the same interest, we just each had different views on how to address that.”

He thinks Weld currently has a good “circle of collaboration, communication and education” that the citizens, local officials and industry all want.