Eight coal units at three plant sites with combined generating capacity of 3,000 MW-plus are being retired by the Tennessee Valley Authority (TVA) to diversify the generating mix and keep pace with “changing economic and regulatory conditions,” TVA’s board of directors said last week. 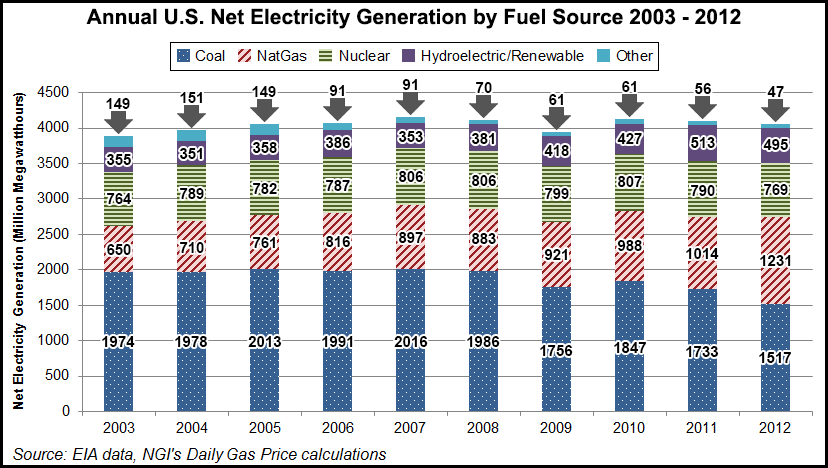 “This will support our focus on cleaner energy and bring additional, necessary balance into our portfolio for managing our current and projected load profile,” Johnson told the board last Thursday.

The action is part of a plan that will move TVA toward a generation fleet that is 40% nuclear, 20% natural gas, 20% coal and 20% hydro, renewables and energy efficiency. Nationwide, coal remains the dominant fuel source for electricity generation, providing 1.52 billion MWh in 2012, according to Energy Information Administration data, but natural gas is has been taking up a bigger slice of the generation pie in recent years. In 2003 gas accounted for 650 million MWh; by 2012 that figure had ballooned to 1.23 billion MWh.

“We also looked hard at the effect on rates, our employees and any potential economic impact to local communities,” Johnson said of the review.

Under the plan approved last week, coal plants will be shuttered that already were idled or scheduled for retirement based on an agreement with the U.S. Environmental Protection Agency. The retirements affect all five units at the Colbert Fossil Plant in Tuscumbia, AL; one of two units at Widows Creek Fossil Plant in Stevenson, AL; and two of three units at Paradise Fossil Plant near Central City, KY.

The Paradise facility’s Unit 3, one of TVA’s largest coal units, would continue to operate with new emissions controls installed. A natural gas-fired plant to be built would retire the other two coal units at the facility. Including the gas generator and emissions controls, the total cost for Paradise is estimated at $1 billion.

Johnson would set the schedule for all of the coal unit retirements. The IRP also is being updated.

“These were difficult recommendations to make as they directly impact our employees and communities,” Johnson said. “But the plan is what’s best in terms of its positive impact on TVA’s rates, debt and the environment; and it will bring the greatest benefit to the people of the Valley.”

The board delegated authority to Johnson to establish a schedule for the coal unit retirements.