Analysts are keeping an eye on costs and production results from the still-emerging Tuscaloosa Marine Shale (TMS), but Amelia Resources LLC is going “100 mph” to market 47,300 net acres in the play, which management believes may hold a resource potential of more than 1 billion bbl. 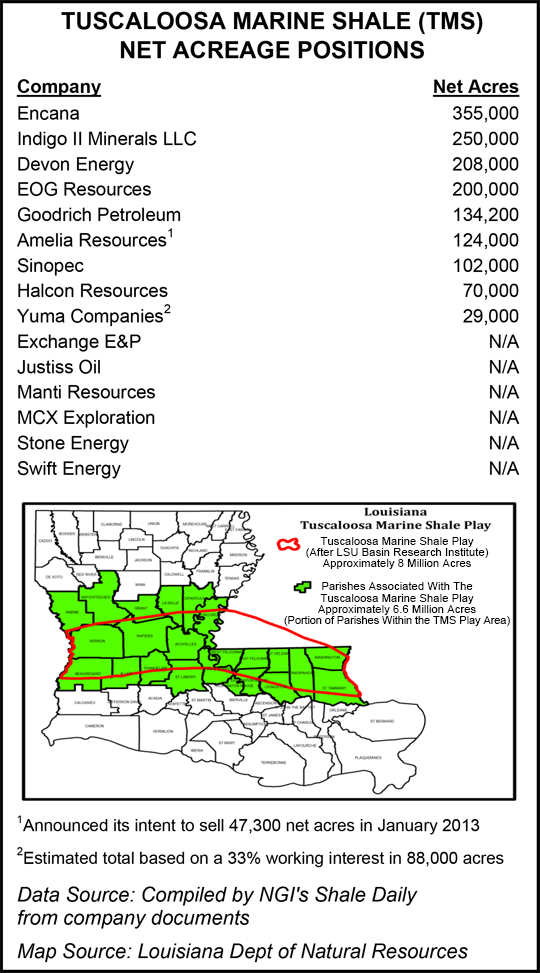 Amelia is marketing the acreage for sale for an undisclosed client in an area close to several of the biggest operators in the emerging oil shale play, President Kirk Barrel said. Barrell, who writes a blog about TMS activity, said the acreage would provide “excellent” results using unconventional drilling techniques, as well as positive economics.

“In addition, we like the fact that the Austin Chalk provides a secondary target across the position,” Barrell, a petroleum geologist, said of the shale play. “We’re going to be 100 mph over the next couple months with this data room,” he told NGI’s Shale Daily.

The Woodlands, TX-based Amelia, which is privately held by six investors, has an estimated 124,000 net acres in the TMS and has evaluated more than 800 wells across Louisiana and Mississippi (see Shale Daily, June 28, 2012). The management team believes the TMS, which has 2.9-7.4 million prospective acres, is “Eagle Ford age equivalent” and a “proven producer.”

The prospect for sale contains nearly 200 operated drilling locations at 250-acre spacing in the Mississippi’s Wilkinson and Amite counties, as well as Louisiana’s West Feliciana Parish. The leasehold offers a three-year term with two-year options to extend.

“Encana’s first TMS well came online with a 30-day IP [initial production rate] of 770 boe/d (90% oil),” according to Amelia. “Encana’s last two wells have had 30-day IPs over 1,000 boe/d (90% oil). Industry experts are estimating the latest round of wells will have EURs [estimated ultimate recoveries] above 500 million boe.”

Encana’s management team in September put the TMS at the top of its liquids prospects list (see Shale Daily, Sept. 18, 2012).

EOG’s first horizontal TMS well, the touted Dupuy Land Co. 20H-1, had an “initial potential of 730 boe/d,” 90% weighted to oil, with an estimated drill and completion cost of $10.3 million, Barrell noted. Compensating for an estimated 75% first-year decline, EURs for the EOG well project are estimated at more than 535 million bbl of oil and 0.37 Bcf of natural gas, with a rate of return (ROR) of more than 70%.

In addition, results from the Austin Chalk also appear to be encouraging based on early results from Anadarko Petroleum Corp., Atinum Operating and Swift Energy Corp., according to Amelia. It said several “conventional prospects also exist in the Frio, Wilcox and Lower Tuscaloosa formations.”

The prospect brochure is available until Jan. 21 and the data room will be open until Jan. 29, according to Amelia. Bids are due by March 5, with a sales contract possibly in place by March 12. The closing is set “on or before” April 2.

U.S. Capital Advisors (USCA) analyst Cameron Horwitz, who published an indepth report about domestic exploration and production prospects this year, said the TMS is “still challenged with elevated well costs,” which made for a “high economic threshold.

“We see 2013 as a make-or-break year for the play,” with “material implications” for Goodrich, which USCA covers.

Horwitz said he plans to watch the production history for Encana’s operated Anderson wells “to see if rates stabilize in a range that suggests 500 million EURs as achievable,” which would be the “minimum required for acceptable ROR in our opinion.” The “biggest upcoming data points for us are Goodrich’s initial operated results and EOG/Halcon’s western step-out rates,” said Horwitz.

Goodrich indicated last July that one of its TMS well flows was more than 1,000 boe/d (see Shale Daily, May 24, 2012). The producer plans to spend the bulk of its 2013 capital budget to drill for oil in the Eagle Ford and the TMS (see Shale Daily, Jan. 4).