Mississippi Gov. Phil Bryant on Tuesday signed into law several energy bills that were passed by state lawmakers this spring, including one piece of legislation that should encourage more development in the emerging Tuscaloosa Marine Shale (TMS), as well as other unconventional oil and natural gas formations. 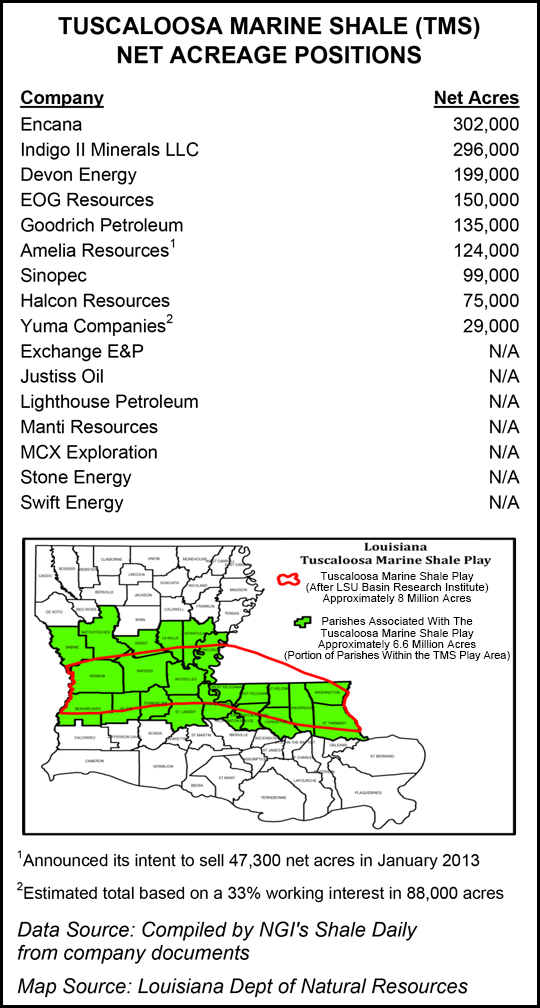 A reduction in severance taxes for drilling horizontal wells was part of the long list of legislation that Bryant signed, which included a tax break for energy consumption by manufacturers, stricter efficiency regulations for commercial and government buildings and incentives for government fleets to use alternative fuels.

“This ‘Energy Works’ legislation speaks to our state’s strong footprint in the energy sector and our continued commitment to make Mississippi the place to invest in energy,” said the governor. “My administration will work overtime to land major energy-related projects and to make sure our energy partners who are here have the tools and the support to be successful and to expand.”

On Tuesday during a conference call to discuss first quarter performance, Encana Corp.’s USA chief Jeff Wojahn said the severance tax would be a positive for the TMS, where expensive drilling has sent well completion costs higher than in some of the more established plays (see Shale Daily, April 24).

Encana is in the early stages of developing the TMS, which remains an “emerging” play, not yet on the operator’s commercial status list. With six wells producing in the TMS and two additional wells set to ramp up before the end of June, the company is gaining confidence in the potential of the play.

“Right now we are really focused on a number of milestones that we set for ourselves,” Wojahn said. “We believe that the recoveries for 7,500-foot horizontals could approach 700,000-750,000 bbl EURs [estimated ultimate recoveries]. There is obviously opportunity to increase that with a higher stimulation of our rock volume…

“We continue to gain confidence in the reserve values with the maturity of our production information,” Wojahn said. “Total well costs continued to drop from an average of approximately $20 million in the first wells we drilled in the play, to our current cost of $17 million per well, and we are budgeting an average cost of approximately $15 million per well for this year’s program.”

The severance tax reduction “will translate to roughly $700,000 to $800,000 of cash flow uplift on each of our TMS wells and supports our efforts to meet commerciality thresholds,” Wojahn told investors. Encana also is seeking “marketing opportunities” in the play with interested investors.

Goodrich Petroleum Corp., which partners on some wells with Encana in the TMS and which has reported solid success, has eschewed all of its other onshore gas drilling this year to focus on the TMS and Eagle Ford Shale (see Shale Daily, Feb. 25). CEO Gil Goodrich said during a conference call to discuss 4Q2012 performance that the “lessons we have learned in the Eagle Ford will be very valuable as we increase our activity in the Tuscaloosa Marine Shale play and work to reduce cycle times and total completed well costs…”

Another TMS player, Halcon Resources Corp., is encouraged by recent well results by the industry. Last month CEO Floyd Wilson told analysts that the information from the TMS “has picked up recently,” and results continued to improve (see Shale Daily, March 4). “Longer laterals and enhanced completion designs are the reasons. And costs are coming down.”

Among other legislation that Bryant also signed into law was SB 2564, which provides an energy infrastructure revolving loan fund that allows local governments to borrow at a low interest rate to invest in major economic development. Any area that has a new economic development project of more than $50 million in private investment is eligible to receive funding. Legislation in SB 2913 extended the $15 million fund until 2016.

“Most energy jobs pay twice the average household income in Mississippi,” the governor said at the time. The payoff appears to be coming.

Earlier this month Schulz Xtruded Products, the Mississippi arm of Germany’s Schulz GMBH, said it would spend $30-50 million to build an oil and gas pipeline finishing facility in Hernando, MS, that is expected to add 70 jobs. The companies said the demand for corrosion-resistant pipes prompted their decision to locate in DeSoto County.