An initial rally in natural gas forward markets in response to plunging oil prices was quickly erased during the March 12-18 period as traders weighed the broader demand implications brought on by the coronavirus. 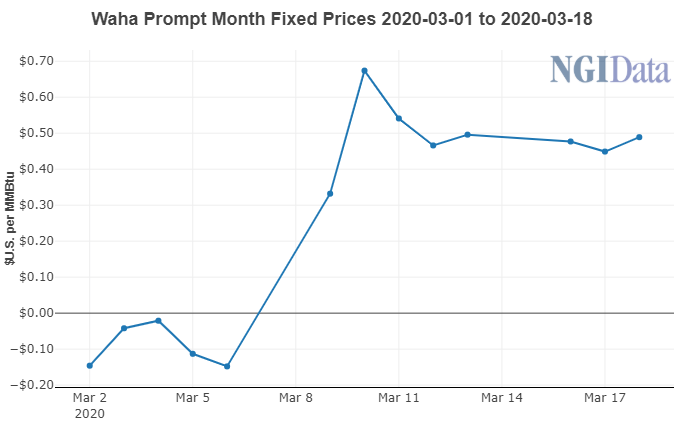 Losses of 20 cents or more were common at the front of the curve, but winter strips fared much better and averaged only 5 cents lower, according to NGI’s Forward Look. On a regional level, Permian Basin market hubs, which last week ran away with the most substantial gains, emerged nearly unscathed from this week’s spiral, while cooler weather on the West Coast capped losses there.

The downside seen at the majority of U.S. markets mirrored the behavior of Nymex gas futures, which remained well supported early in the week before buckling under pressure from the slowing economy. After closing in on $2.00/MMBtu early in the March 12-18 period, the April Nymex tumbled to an intraday low of $1.555 on Wednesday before going on to settle at $1.604, the lowest level in decades.

“This is the lowest prompt-month settle in more than 20 years, and yet lower bounds remain uncertain as virtually all markets weigh the potential impacts of demand losses in a world where businesses are slowed or shut indefinitely,” Mobius Risk Group said.

With the United States potentially on the brink of a recession, BTU Analytics examined how natural gas markets could be impacted based on the effects seen during the financial markets meltdown that began in 2008. In 2009, residential/commercial was down 1.8%% and industrial demand declined by 7.5% for a combined 1.8 Bcf/d, according to BTU. Similar impacts to both sectors would result in declines of 2.2 Bcf/d in 2020.

“In 2009, power gained at the expense of coal, but in 2020 the gas market will be much more impacted by the level of total load in the system,” BTU CEO Andrew Bradford said.

Adjusting natural gas power burn by the 5% decline in generation witnessed in 2008 would represent an additional 1.6 Bcf/d decline in demand, according to the CEO. Meanwhile, if the Mexican economy responds similarly to 2008, he would expect a 7% decline in exports south of the border, or about 0.4 Bcf/d.

“These sectors thus could combine for total declines of over 4.2 Bcf/d, or on average 5% lower than 2019 levels,” Bradford said.

Considering the U.S. gas market already was expected to be long supply following a weak winter 2019-2020, an additional 4.2 Bcf/d is “a lot of length to manage” into an already long summer gas market, according to BTU. Add in an oversupplied global liquefied natural gas (LNG) market, and the U.S. gas market could be further awash in supply if demand falters, the firm said.

While U.S. operators are slashing capital expenditures (capex) in the face of falling oil prices, “the risk of demand shocks to the system may overwhelm the capex declines,” Bradford said.

Prior to the escalated coronavirus risks and weak macro backdrop, BofA Global Research analysts viewed global gas as a soft ceiling on domestic prices this summer. Even now, U.S. natural gas remains “just barely” in the money to export this summer, according to the analysts.

“Given the current curve, we continue to assume high utilization of U.S. LNG export capacity to continue,” BofA analysts said. “The risk is that LNG exhausts European storage capacity this summer and forces U.S. LNG exports to be reduced.”

That’s a plausible scenario, with Rystad Energy projecting that European gas demand in 2020 would most likely drop by 0.7% compared with a pre-coronavirus forecast. Growth would be limited to about 2 billion cubic meters (Bcm) year/year, short of previous expectations for a 6 Bcm increase. Rystad calculated the continent’s gas demand for 2018 at 554 Bcm, but the firm has revised its 2020 forecast to 556 Bcm, down from 560 Bcm before coronavirus-related restrictions were put in place.

Rystad’s most likely scenario assumes most of the European continent goes into lockdown for 30 days during the two-month period of March and April, during which time total demand would be limited to 89.2 Bcm, from a previously expected 93.3 Bcm for the period.

“During the last few days, the likelihood of seeing further lockdowns across Europe has increased, making this scenario more likely. Also, Italy is about to end its second week of lockdown, and it doesn’t seem to be coming to an end yet,” said Rystad’s Carlos Torres Diaz, who heads Gas and Power Markets. “It is therefore probable to see reduced commercial and industrial activity in countries for a period of at least four weeks.”

Meanwhile, Lower 48 demand also faces headwinds on the weather front. The latest forecasts once again moved in the warmer direction, with most of the period through late next week expected to be warmer in the eastern half of the nation as in the South, according to Bespoke Weather Services.

“We even have enough warmth in Texas next week to get cooling demand, with cities such as Houston expected to get close to or hit the 90-degree mark a couple of times,” Bespoke chief meteorologist Brian Lovern said.

The best chance of seeing any colder-than-normal weather continues to lie in the West and the northern Plains, according to Bespoke, with the firm favoring a similar pattern persisting into early April.

The headwinds from lackluster weather-driven demand do not bode well for a market teetering near historic lows. The April Nymex futures contract, however, eked out a modest gain on Thursday following government data reflecting a larger-than-expected storage withdrawal for the week ending March 13.

Prior to the report, a Bloomberg survey showed a median estimate for a 3 Bcf withdrawal, while a Reuters poll landed on a consensus pull of 6 Bcf. Estimates ranged from minus 2 Bcf to minus 11 Bcf. NGI’s model predicted a 1 Bcf withdrawal.

Nevertheless, the Energy Information Administration’s (EIA) 9 Bcf draw came in well below the 91 Bcf recorded for the year-ago period and the five-year average pull of 63 Bcf.

Despite the bullish EIA report, Bespoke said data in the next few weeks will be more useful in determining how much demand loss is actually taking place amid the coronavirus outbreak, “and likely will carry more weight in terms of market impact.”

By region, the Midwest withdrew 17 Bcf, while 14 Bcf was pulled in the East. The Mountain and Pacific regions each withdrew 1 Bcf week/week. In the South Central, 12 Bcf was injected into salt stocks, with another 12 Bcf added to nonsalt inventories, according to EIA. Total Lower 48 working gas in underground storage as of March 13 stood at 2,034 Bcf, 878 Bcf (76.0%) above year-ago levels and 281 Bcf (16.0%) higher than the five-year average, EIA said.

In what was a tumultuous week for natural gas forward prices, Permian markets held onto most of the gains garnered the previous week as traders continue to digest how the exploration and production sector’s recently announced spending and drilling activity cuts could impact gas supply.

Midstream and oilfield services sectors also are reducing capex, laying down rigs and cutting dividends, with some executive teams including Parsley Energy Inc. voluntarily reducing their salaries through the rest of the year.

While the story is still unfolding, Tudor, Pickering, Holt & Co. (TPH) analysts are attempting to put those cuts into context, but U.S. crude production is at risk because a large portion of volumes are in the hands of distressed producers and West Texas Intermediate (WTI) prices plummeted earlier this month. They recovered by several dollars on Thursday but were still well under $30/bbl.

“Elevated leverage profiles, seized up capital markets and tightening bank lending standards will have a notable impact on U.S. production growth moving forward, especially with WTI now under $25,” the TPH analysts said before Thursday’s close. In their updated at-risk production analysis, the TPH team estimated that 2.3 million b/d of supply is held by distressed producers, “which accounts for a notable 22% of total onshore U.S. production.”

While the decline in crude fundamentally should be supportive of gas by curtailing associated gas production, the effects won’t be seen for six months or so, according to Genscape Inc. Since late December, the firm’s Calendar Year 2021 gas production forecast has been revised by nearly 8.5 Bcf/d and is indicating the potential for output to come in nearly 6.2 Bcf/d below CY2020.

Meanwhile, other developments are hurting the demand outlook for the region. Genscape is reducing its forecast for Permian and U.S. pipeline exports to Mexico in April because of yet another delay to the modeled start date for Mexico’s Wahalajara pipeline system.

Mexico’s state-run Comision Federal de Electricidad reportedly is seeking to tender two LNG cargoes for delivery to the Manzanillo terminal, which suggests Wahalajara would not be ready this month as had been expected, nor even at the start of April, according to Genscape.

So far, forward markets have yet to price in this uncertainty, with regional prices bucking the trend of dramatic double-digit decreases along the front of the curve. Waha April picked up 2.0 cents from March 12-18 to reach an average 48.9 cents, according to Forward Look. Summer prices rose 4.0 cents to average 90.0 cents, while the winter strip climbed a more substantial 15.0 cents to $1.57.

El Paso Permian traded both sides of even, with April slipping 3.0 cents to average 51.3 cents, and the summer strip tacking on 2.0 cents to reach a 98.0-cent average, Forward Look data show. Winter prices were up 11 cents to $1.63.

On the East Coast, the extension of an outage on the Texas Eastern Transmission (Tetco) system had little bearing on pricing. In an update to its Line 25 force majeure, which was originally declared on March 13 from an unplanned outage between Berne, OH, and Holbrook, PA, Tetco said it expects this section to remain out of service until at least mid-April because of weather and ground conditions.

Capacity through the Berne 30-inch diameter line had been reduced by 130 MMcf/d, but flows had fallen an average of 167 MMcf/d since the force majeure was declared, according to Genscape. However, between this constraint and ongoing maintenance on M2’s western 26-inch line from Sarahsville to Lebanon, a lot of production was rerouted from M2 to Columbia Gas Transmission, it said.

Forward prices across the Tetco system fell in line with Nymex futures, dropping 20 cents-plus at the front of the curve and no more than a dime in the winter strip, Forward Look data show.