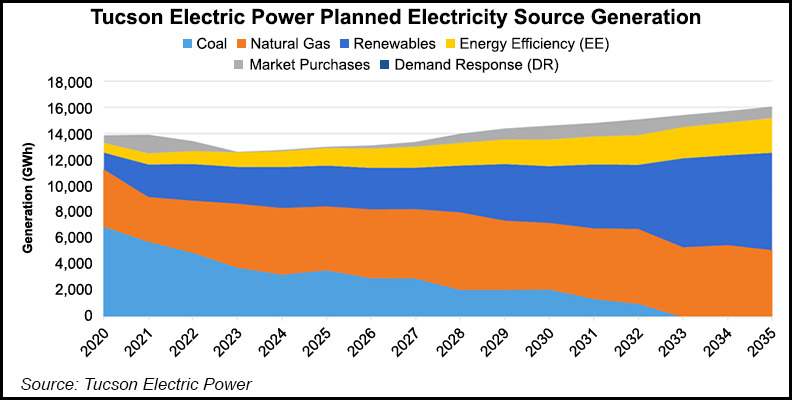 The plan would retire the remaining units at TEP’s coal-fired Springerville Generating Station and add 1,400 MW of energy storage over the next 12 years, while also adding nearly 2,500 MW of wind and solar power systems, including 457 MW this year.

“The foundation for this transition was laid over the past two years through TEP’s strategic acquisition of Gila River Unit 2, a highly efficient 550 MW natural gas combined cycle plant and 10 efficient and flexible RICE generators at the Sundt Generating Station,” according to the IRP.

Spokesperson Joseph Barrios said plans to add two gas resources would “allow for the eventual elimination of coal while replacing all future capacity with clean resources.” Planned retirement of 1,073 MW of coal-fired units and 225 MW of gas-fired capacity would allow the preferred portfolio to not include any fossil fuel resources other than the gas units in place.

“The plan calls for a dramatic expansion of wind and solar power resources that are supported by both energy storage systems and efficient gas-fired generators,” he said.

Spanning the next 15 years, TEP’s IRP also calls for an end to surface water for power generation, a 70% reduction in groundwater use, and a continued emphasis on energy efficiency programs to reduce usage and shave peak demand.