President Trump delivered a one-hour State of the Union (SOTU) address Tuesday night that focused on a litany of priorities, but there were scant remarks about the tremendous gains in the U.S. oil and gas industry. 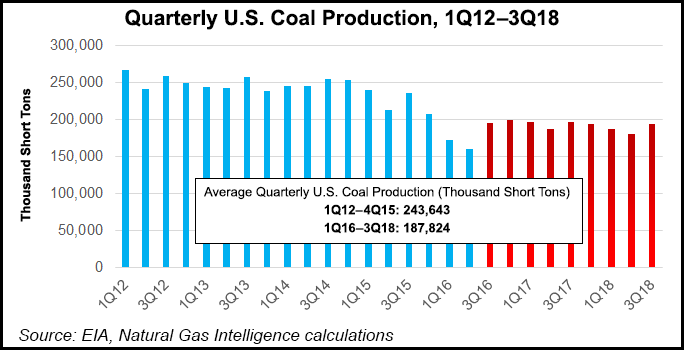 Still, the comments, few as they were, drew wild applause from most of the congressional audience, including the Republicans in the audience and notably Democratic Sen. Joe Manchin of West Virginia, whose state has been part of the unconventional revolution to unlock natural gas and liquids reserves.

In the last two years, the president said, the administration “has moved with an urgency and historic speed to confront problems neglected by leaders of both parties over many decades. In just over two years since the election, we have launched an unprecedented economic boom, a boom that has rarely been seen before. There has been nothing like it.”

Trump set up his SOTU comments about U.S. energy dominance by noting that the administration had “cut more regulations in a short period of time than any other administration during its entire tenure. Companies are coming back to our country in large numbers, thanks to our historic reductions in taxes and regulations…

“And we have unleashed a revolution in American energy. The United States is now the No. 1 producer of oil and natural gas anywhere in the world,” he said. The country has been considered the world’s largest producer since 2012.

“And now, for the first time in 65 years, we are a net exporter of energy,” Trump said. Cheniere Energy Inc. actually began exporting natural gas from its Sabine Pass facility in Louisiana in early 2016, nearly a year before Trump took office. Since his election, other Lower 48 gas export projects have ramped up, with more on the way.

The president did not mention coal once in the SOTU, a topic in which he has previously invested political capital. Coal use and output has continued to decline during his tenure.

There had been hints preceding the address that the president would make a push to build more infrastructure, and in particular for oil and gas. However, there was no specific mention of energy pipelines or midstream operations during his speech.

“Both parties should be able to unite for a great rebuilding of America’s crumbling infrastructure,” Trump said. “I know that the Congress is eager to pass an infrastructure bill — and I am eager to work with you on legislation to deliver new and important infrastructure investment, including investments in the cutting edge industries of the future. This is not an option. This is a necessity.”

The president drew partisan cheers when he touted his replacement of the North American Free Trade Agreement, aka NAFTA, with the United States-Mexico-Agreement. However, the revamped trilateral agreement has yet to be approved by Congress, and Democrats and Republicans have said it will not be approved without significant changes.

Trump said the trade war he launched last year, which imposed $250 billion of tariffs on Chinese goods, has resulted in “billions and billions of dollars” to date into the U.S. Treasury. Tariffs also have been imposed on imported steel and aluminum from around the world.

In total, revenue from customs duties, including tariffs, is estimated to have increased by $13 billion year/year during 3Q2018, according to the Commerce Department.

The United States has made it clear to China that it will no longer steal jobs or intellectual property from U.S. companies, Trump told the audience. Trade negotiations continue, and the two countries are attempting to reach a trade deal by early March.

“We are encouraged that the president continues to prioritize development of critical infrastructure,” said CEO Don Santa of the Interstate Natural Gas Association of America. “Expanding natural gas infrastructure is essential to improving our environment and growing our economy, and serves as the indispensable link between a clean-burning, affordable domestic energy source and the needs of consumers and job creators.

“Nonetheless, over the past few weeks we’ve seen natural gas utilities make announcements about the possible curtailment of new natural gas hook-ups in some areas of the country that are driven by decisions made at the state level.”

The impact of these decisions “is real and entirely avoidable,” Santa said. “Homeowners that want to switch to clean-burning natural gas and businesses that are seeking to expand can’t because of a lack of energy infrastructure.”

Santa also said streamlining the permitting process to allow private capital to be deployed in an efficient manner “will significantly spur job creation and allow for continued economic growth, without compromising on environmental protection.” The alternative, he said, would be more liquefied natural gas shipments from Russia to supply U.S. Northeast markets in time of need.

“INGAA applauds the administration’s commitment to developing commonsense, bipartisan solutions that allow for a practical, timely and predictable review and approval process for proposed infrastructure projects and urges Congress to move forward with legislation that will expand access to clean-burning, affordable natural gas. Our economic and environmental health demands it,” Santa said.

“I want to commend President Trump and his administration on their efforts to curb unnecessary regulations and to streamline the permit process for the midstream industry,” said GPA Midstream Association CEO Mark Sutton. “These efforts have helped the midstream industry build out our operations and get our infrastructure projects underway in a more timely and efficient manner. GPA Midstream and its member companies stand with the president to help continue to build out our nation’s energy infrastructure, which is crucial to all Americans.”

American Energy Alliance President Tom Pyle said the president “reminded us that the state of American energy is strong. America’s economy is booming, creating a thriving environment for innovation and energy development. Producers and consumers alike should be proud of America’s energy progress in 2018.

“The enormous resource wealth of the United States is finally being unlocked, lowering prices and improving Americans’ economic well-being. These wins didn’t occur in a vacuum. They happened because America’s energy producers had the know-how, and the Trump administration had the resolve to do away with self-inflicted federal red tape that hampered ingenuity and technological progress.”

Pyle said a “key priority” of the Trump administration’s agenda this year “must be to address the lack of pipeline capacity that is stranding energy resources in several key locations across the United States. We also look forward to finalizing important regulatory reforms in the year ahead.”