Rarely does an incoming president make a huge impact on the natural gas market, but President-elect Trump’s promise to bring back the coal industry, as well as questionable views about climate change, could have a negative impact, according to energy experts. 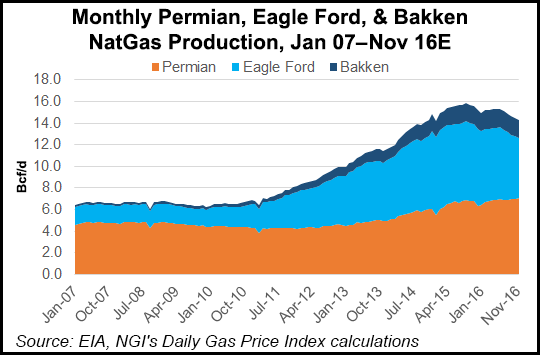 Societe Generale analyst Breanne Dougherty, who covers U.S. natural gas markets, discussed the preliminary outlook for domestic gas during a wide ranging interview with NGIon Thursday. NGI‘s Patrick Rau, director of strategy and research, also weighed in on the positives and negatives that may be ahead for the industry as the GOP controls the presidency, Senate and House. And BofA Merrill Lynch Global Research analysts suggested what to expect over the next four years after Trump stunned the world in Tuesday’s election (see Daily GPI, Nov. 9).

“A Republican nominee in general tends to be more industry friendly than not, so I would say the industry as a whole saw Trump as more supportive…than not,” Dougherty said. “I can’t really think of too many things that would be first on the list of this president-elect that would really affect natural gas prices in any sort of material way.”

Most of the risks to the producer side of the industry are at the state level, not from the federal government, except in federal authority over infrastructure like gas pipelines. Federal regulations outlining a Clean Power Plan and regulating Waters of the United States, or WOTUS, are currently tied up in the courts. Rules to oversee hydraulic fracturing on federal lands and regulating methane emissions are in the pipeline but have yet to take effect. Who Trump appoints to the Federal Energy Regulatory Commission “might make a difference. But I think in general the industry has been operating autonomously,” she said.

“It’s very seldom that we see any sort of change in presidency really make a huge impact on the natural gas market,” Dougherty said. The North American gas market behaves with “relative autonomy. It’s highly deregulated and it has a lot of market participants. It’s very liquid as well. In general, there doesn’t seem to be much of a political influence that comes into it…Where some of that political influence comes in are on things such as climate change policy.

“Clearly, Obama’s team has put together a climate change policy. It has certain standards, of course, a lot of coal retirements. It definitely has some preferred non-coal, non-oil targets that were going to come to fruition over the next 10 years, for instance. Gas, seemingly from the wording of Obama’s policies, was not unfavored. Clearly, there was favorable support for renewables, but gas, if you look at the verbiage, was never listed as one of the unfavored types of fuel sources.”

Trump’s climate change view is somewhat opaque, and Dougherty is unsure whether he would go back and reassess policies that the current administration has initiated.

“But he probably won’t be as big on the anti-coal or the anti-oil or those types of things,” she said. “We might expect in his potential policy or potential conversations the differences for the natural gas market, but I don’t see the type of policy change that would be able to bring coal back.”

That would mean that there would be little change to the current makeup of the generation fleet, which is strongly favored to gas.

“If anything, maybe it would mean less incentives for the renewables, and so clearly that gives more room for gas generation to grow,” Dougherty said. “The fact that gas is cheap and highly efficient…would be a pretty challenging argument for anybody and any presidency to want to go back to a less efficient and dirtier fossil fuel.”

Given the “opportunities and knowing the gas resource that is there, why would you decide to reverse and revisit growth in something different? I’m not saying it won’t happen, but if Trump were to spend time speaking to energy people as a whole, I think that conversation would probably lead to not necessarily huge subsidies being shelled out to retired coal plants and coal companies that have disappeared. Right? It would be a really long road. What are you going to do? Go ask people to build new coal companies again?…

“The jobs have gone somewhere else. When he says he wants to bring the jobs back, I hope that what it means is that this idea of investing in infrastructure can be transferred to different forms of energy. There’s no reason why skills of people who are trained in certain forms of the coal industry cannot be transferred to other forms of energy. There’s a lot of things you can do.”

Dougherty sees most drilling regulation coming at the state level, for instance the state-level oversight of fracturing, as has been done in Pennsylvania and California, are “not instructed to them by the president. So I can’t see anything necessarily that a new president would do to drastically change the landscape.”

Federal policy that could impact the gas market may be the incoming administration’s stance on gas pipelines and export facilities.

“I’m not too worried about what happens between now and 2020, as those decisions basically have been made,” Dougherty said in regard to gas infrastructure. “I don’t see anything that’s in the works that you might say can’t happen” as far as pipelines already approved or being constructed.

“But does it mean that there’s a more streamlined process to get pipelines built? Does it mean more jobs would be created with infrastructure more friendly to the gas community? Perhaps.”

The president-elect also stressed energy security during his campaign, but does that mean he would be less supportive of gas exports?

“That’s a good question,” Dougherty said. “Because clearly, we are a very strong and growing supplier. The export story is part of our future for the North American market. But if you’re talking about energy security, you tend to mean reducing exports and reducing imports as well. I don’t quite know how that’s going to look, but in general, I can’t see anything happening…”

What Trump will do, however, is set the “tone” for the energy industry, she said. “Moving toward a renewable future won’t be as much in the conversation. Maybe that will have some sort of subconscious effect. But in general, I don’t see a real risk in policy to change that would be either hugely supportive or detrimental to the natural gas market. It really would be more of a tone.”

Rau said the president-elect “is obviously pro-oil and gas, so I think the prevailing wisdom will be that is good for natural gas prices. But there are actually a few things Trump is considering or may enact that may not be so great for U.S. natural gas prices.”

Among other things, Trump is calling for increased U.S. oil production, which “means more associated gas production, especially since that production comes from the Permian, Eagle Ford, and the Bakken,” Rau said. Potential Energy Secretary Harold Hamm, CEO of onshore giant Continental Resources Inc. (CLR) “would love to see the Bakken roar back, no doubt, given CLR’s stake there.

“Then again, if Trump, Hamm et al really don’t care about the environment, and allow more gas to be flared (like CLR and others have been doing in the Bakken), that would help counter the impacts of increased associated gas. But net-net, associated gas production would grow.”

“Yes, it’s about economic dispatch, that is, using the cheapest input fuel, but legislation could push more coal use at the expense of natural gas,” Rau said. Trump’s stance against Mexico also may impact the future of U.S. gas exports, which have been a growing source of U.S. demand, he said.

If the Trump administration were to push through tax credits for E&Ps, it would lower unit costs, which could be a negative for prices, according to Rau.

“Tax credits would benefit producers cash flows, but they would also likely put downward pressure on natural gas prices, everything else being equal, since those would lower unit costs, and therefore producers could accept lower prices and still maintain margins,” he said. “Producers are commodity companies, which means they are price takers, by and large. If they keep lowering their unit production costs, they could accept lower prices for their output and still maintain margins. More favorable tax treatment would help lower their unit costs.

“The big unknown is whether the Trump administration is able to create a comprehensive natural gas policy that boosts demand,” Rau said. “That would help counter if not outstrip the impacts of increased supply. One thing going for Trump in this regard is this is going to be the first time a president has controlled both the House and the Senate after the major surge in U.S. natural gas reserves following the shale boom.

“I think Capitol Hill was always reticent to support natural gas use when our domestic reserves were thought to be less than 20 years, but now that they are 100 years or more, and now that there is less bipartisan gridlock in Congress and the Senate, perhaps that will help lead to policy that promotes more gas burn.”

“On the one hand, the president could speed up pipeline infrastructure with faster FERC approval in the coming years, allowing for a faster supply expansion,” Blanch said Friday. Longer-term, scrapping the Environmental Protection Agency’s Clean Power Plan “is a significant threat to U.S. natural gas demand to 2030.”

BofA Merrill Lynch is forecasting 2017 U.S. gas prices to average $3.50/Mcf, which is 60 cents higher than the current forward curve.

Blanch also weighed in short- and medium-term downside risks to oil prices since the U.S. election.

“This could lead to a surge in U.S. domestic energy output over the next two to three years,” Blanch wrote. “After all, a Trump presidency will likely prioritize energy security of supply and affordability over environmental concerns. In our view, this means more pipelines, more drilling locations and more refinery activity in the U.S.

“Still, it is not all doom and gloom. There are also two potential eventual positives for oil prices: a more inflationary backdrop and possibly increased geopolitical risk.”

As oil price risks have grown, there’s a bigger incentive for the Organization of the Petroleum Exporting Countries (OPEC) to work together to stabilize production from their 14 member countries. OPEC is set to hold a formal meeting at the end of this month to formalize its first production reduction in eight years (see Daily GPI, Sept. 28).

A Republican-led government “may significantly weaken Iran’s negotiating position inside the cartel, smoothing internal OPEC politics,” Blanch said. “In our view, Iran’s worst case production scenario for the next two years, essentially maintaining output at current levels, may have just become a best case scenario. Third, a U.S. energy independence agenda is back in play, and OPEC will have to figure out a way to cope with it. The cartel thus faces a moment of truth on Nov. 30: come together…or sink together.”