President Trump called on Congress Monday to pass an infrastructure bill that would generate at least $1.5 trillion in new investment over the next decade, with the federal government contributing $200 billion and a goal set to shorten the permitting process for infrastructure projects to two years or less. 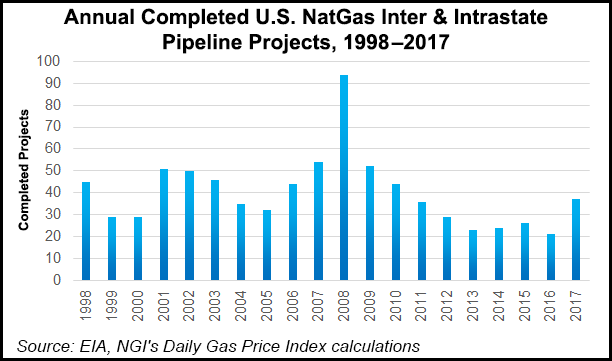 For the oil and natural gas industry, the plan, specifically, the Legislative Outline for Rebuilding Infrastructure in America, proposes giving the Department of Interior (DOI) secretary the authority to review and approve rights-of-way for oil and gas pipelines across lands administered by its National Park Service (NPS).

The DOI secretary now has the authority to approve such plans for electric, water and communications facilities, but not oil and gas. That authority rests with Congress.

“Obtaining congressional approval for each pipeline crossing and facilities necessary for the production of energy is time consuming and delays construction of needed natural gas pipeline facilities,” the plan said. “It also is inconsistent with the process adopted for other types of facilities.”

The plan also calls for establishing an Interior Maintenance Fund to help pay for repairs and maintenance of infrastructure on public lands. Under the plan, half of the receipts generated on public lands from oil and gas development, as well as other energy sources, would be deposited into the fund, up to $18 billion.

“The receipts deposited in the fund would be made available to the DOI secretary, without fiscal year limitation, to address the deferred maintenance and capital needs for infrastructure in national parks and wildlife refuges. The DOI would use its capital asset management systems to prioritize projects, monitor implementation, and measure results.”

“President Trump is absolutely right to call for a robust infrastructure plan that rebuilds our national parks, refuges, and Indian schools, and I look forward to helping him deliver on that historic mission,” said DOI Secretary Ryan Zinke.

The administration also proposed creating a $20 billion Transformative Projects Program (TPP) through the Commerce Department, which “could include” the energy sector.

“Funding under this program would be awarded on a competitive basis to projects that are likely to be commercially viable, but that possess unique technical and risk characteristics that otherwise deter private sector investment. The TPP would support projects that, with federal support, are capable of generating revenue, would provide net public benefits, and would have a significant positive impact on the nation, a region, state, or metropolitan area.”

“Natural gas is an essential part of meeting our country’s ambitious goals of energy security, affordability and cleaner air, but sufficient infrastructure must be in place to make that happen,” Wiggins said. “This is a great first step that could bring real progress toward removing unnecessary barriers without sacrificing environmental protections.”

Executive director Charlie Riedl of the Center for Liquefied Natural Gas concurred. “Regulatory certainty for U.S. liquefied natural gas development is essential to the industry’s long term growth and ability to supply the growing global demand,” he said. “Providing a clear path forward for the industry signals to project developers that the United States is the best place to make multi-billion dollar investments to help deliver clean natural gas around the world.”

“Trump’s infrastructure scam is all about greasing the wheels for oil, gas and coal development and his budget funds this massive giveaway,” said Janet Redman, spokeswoman for the group Oil Change International. “‘Streamlining’ critical environmental review really means steamrolling landowners and putting a muzzle on communities when they resist oil and gas pipelines being built through their backyards for private profit.”

The plan also faced opposition from Democrats and a cautious response from the GOP.

House Minority Leader Nancy Pelosi (D-CA) called Trump’s proposal “a puny infrastructure scam” that would “raise tolls on commuters, increase the burden on cities and states, sell our essential infrastructure to the whims of Wall Street, and yank away the protections that keep consumers safe and our air and water clean.”

While Rep. Bill Shuster (R-PA) said Trump “is a builder who understands the importance of infrastructure to jobs and our economy,” he said an infrastructure bill “will require presidential leadership and bipartisan congressional cooperation.”