President Trump appeared to backtrack from a comment he made last week that the controversial Nord Stream 2 natural gas pipeline would make “Germany a captive of Russia,” claiming the United States would compete against the proposed pipeline with liquefied natural gas (LNG) exports. 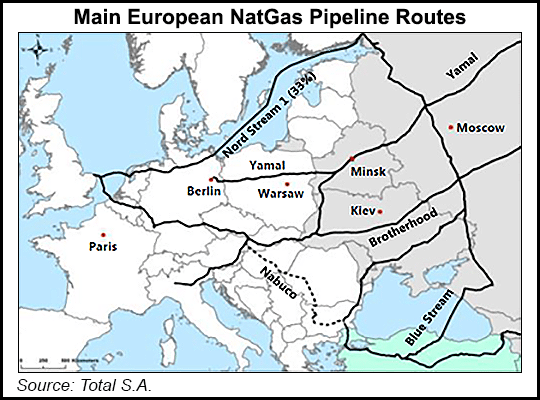 Trump initially made the comments on Nord Stream 2 last Wednesday during a meeting with North Atlantic Treaty Organization (NATO) officials. At the time, he said Germany “is totally controlled by Russia because they will be getting from 60-70% of their energy from Russia,” and called the Russian pipeline “a very bad thing for NATO.”

But during a press conference Monday, in which he appeared alongside Russian President Vladimir Putin, Trump said the United States “will be competing” against the pipeline.

Trump also said he had previously characterized Putin as an “adversary” or a rival. “Actually, I called him a competitor, and a good competitor he is,” he said. “And I think the word competitor is a compliment. I think that we will be competing, when you talk about the pipeline.

“I’m not sure necessarily that it’s in the best interests of Germany or not, but that was a decision that they made” to import gas via Russian-owned Gazprom’s Nord Stream.

Russia is now the biggest gas supplier to Europe through its pipeline system, but after it invaded Ukraine in 2014 and annexed Crimea, the United States and its allies sanctioned some Russian energy companies and executives. The sanctions, coupled with burgeoning U.S. gas supplies, have opened the door to more LNG imports to the continent.

“We’ll be competing” against Russia to supply Europe with gas, Trump said. “As you know, the United States is now, or soon will be, the largest [producer of] oil and gas in the world. We’re going to be selling LNG and we’ll have to be competing with the pipeline. And I think we’ll compete successfully, although there is a little advantage locationally. I just wish them luck.”

Putin during the press conference said Russia is “aware of the stance of President Trump,” and suggested that Russia and the United States, as two of the world’s major producers of oil and gas, should “work together on the regulation of international markets.

“Neither of us is actually interested in the plummeting of the prices,” Putin said, adding consumers in both countries, as well as U.S. gas producers, would suffer.

Other European energy projects that could thwart Russian influence include the Gas Interconnector Greece-Bulgaria, a 32-inch diameter, 182-kilometer (113-mile) pipeline with 3-5 bcm (105.9-176.6 Bcf) of transportation capacity; and LNG Croatia LLC’s floating LNG import terminal on the Croatian island of Krk, which would have 2 bcm (70.6 Bcf) of import capacity.