President Trump signed two presidential memorandums Tuesday to advance construction of the controversial Keystone XL (KXL) and Dakota Access (DAPL) oil pipelines, projects that had been thwarted or delayed by the Obama administration. 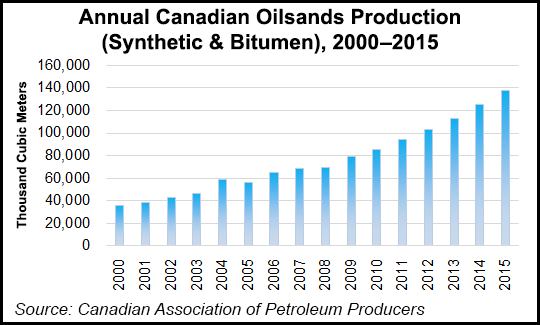 Trump also signed separate memorandums ordering the Commerce Department to submit a report to him on ways to streamline the federal permitting process for domestic manufacturers within 60 days, and for Commerce to develop a plan to maximize the use of American steel for pipeline construction within 180 days.

During a signing ceremony at the White House, Trump said the memorandums allowing the two pipelines to proceed were subject to “renegotiation.”

While signing the KXL memorandum, Trump said the project is “something that’s been in dispute, and it’s subject to a renegotiation of terms by us. We’re going to renegotiate some of the terms and, if they’d like, we’ll see if we can get that pipeline built. A lot of jobs. 28,000 jobs. Great construction jobs.”

Trump then signed the DAPL memorandum. “Again, [this will be] subject to terms and conditions to be negotiated by us,” the president said.

It was unclear if the memorandum on pipeline construction would directly affect KXL or DAPL. “We are, and I am, very insistent that if we’re going to build pipelines in the United States, the pipes should be made in the United States,” Trump said. “[This is] going to put a lot of steel workers back to work. We will build our own pipeline. We will build our own pipes, like we used to in the old days.”

Also unclear are the terms the Trump administration has laid out for Energy Transfer Partners (ETP) and TransCanada Corp., the companies looking to complete DAPL and KXL, respectively. During the Williston Basin Petroleum Conference last May, Trump said that if elected, he would invite TransCanada to reapply for KXL and would approve it, but on renegotiated terms that would put money in the U.S. treasury.

The KXL memorandum invites TransCanada to resubmit its application to the State Department for a presidential permit for construction and operation of the pipeline. The southern portion of the pipe, from Cushing, OK, to refineries on the Gulf of Mexico has already been built and is in service.

Although Canadian Prime Minister Justin Trudeau and Alberta Premier Rachel Notley are both KXL supporters, ClearView Energy Partners LLC speculated that any renegotiation could trigger resistance from the province. Trump could be angling for a new tariff, new terms under a post-NAFTA package, U.S. receipts from a border tax adjustment, or a requirement to use American-made pipe, according to ClearView.

“None of these outcomes necessarily represents an unalloyed victory for KXL sponsors,” said Christi Tezak, managing director at ClearView.

Progress on completing the $3.8 billion DAPL — a 1,172-mile pipeline to transport 500,000 b/d of Bakken Shale crude oil from North Dakota to a pipeline interconnect in Patoka, IL — has been stalled since November, when the U.S. Army Corps of Engineers (USACE) delayed making a final decision on a 1,000-foot easement to tunnel under Lake Oahe. USACE denied the easement one month later.

Protests over completion of DAPL, some of them violent, erupted last year and have evolved into a cause cÃ©lÃ¨bre for environmental groups. Opponents of the pipeline have joined with the Standing Rock Sioux Tribe, which opposes the pipeline over concerns it will impact water and tribal land. However, the tribe recently asked protesters to leave the site.

DAPL, which is more than 90% completed, has also been the subject of a lawsuit in U.S. District Court for the District of Columbia. Last Friday, ETP filed a reply to USACE’s opposition to the pipeline project’s cross-claim and motion of summary judgment asking the court to confirm that the project can proceed with its final segment based on an easement the USACE granted last July. USACE has 10 days to respond to the filing, but the Trump administration could block it from doing so.

Last November, Sunoco Logistics Partners LP agreed to acquire ETP in an all-stock deal valued at nearly $20 billion. The deal is expected to close in 1Q2017.

Meanwhile, KXL — a 1,700-mile pipeline starting in Alberta that would transport 830,000 b/d, including 100,000 b/d from the Bakken, to refineries on the U.S. Gulf Coast — was blocked by the State Department in November 2015 after determining that the $8 billion project was not in the nation’s interest.

One year ago, TransCanada said it intended to file a claim under the North American Free Trade Agreement over the Obama administration’s rejection of the pipeline. The Calgary-based company said it would seek $15 billion in damages. It also filed a lawsuit in U.S. District Court for the Southern District of Texas in Houston over the rejection.

The reaction to Trump signing the presidential memorandums was swift and came from all quarters.

“For too long, private infrastructure investment has been held hostage by government interference driven by fringe interests,” said Karen Harbert, CEO of the U.S. Chamber of Commerce Institute for 21st Century Energy. She added that the memorandums “demonstrate that we finally have an administration that is serious about putting American energy to work for the entire economy…These two projects will create good American jobs and improve access to affordable energy.”

American Petroleum Institute CEO Jack Gerard applauded the move and said it signals a “new direction” in the nation’s energy policies. He said the Trump administration recognizes “the importance of our nation’s energy infrastructure by restoring the rule of law in the permitting process that’s critical to pipelines and other infrastructure projects.

“Critical energy infrastructure projects like KXL and DAPL will help deliver energy to American consumers and businesses safely and efficiently.”

Thomas Pyle, president of the American Energy Alliance, said the two pipelines “are long overdue infrastructure projects that have been senselessly and needlessly delayed by politics.

“In both cases, the previous administration changed the rules in the middle of the game, violating the rule of law and betraying Americans’ trust in the federal government. The Trump administration is sending a strong signal that it is serious about putting Americans’ needs first, and that pipelines and other important energy projects will no longer languish due to political pressure from the ‘keep-it-in-the-ground’ crowd.”

“President Trump is legally required to honor our treaty rights and provide a fair and reasonable pipeline process,” said Dave Archambault II, chairman of the Standing Rock Sioux Tribe. “By granting the easement, Trump is risking our treaty rights and water supply to benefit his wealthy contributors and friends at DAPL.

“We are not opposed to energy independence. We are opposed to reckless and politically motivated development projects, like DAPL, that ignore our treaty rights and risk our water. Creating a second Flint does not make America great again.”

Friends of the Earth President Erich Pica said Trump “has made it clear that his America does not include the millions of Americans who fought to protect our land, water, sacred cultural sites and climate from dangerous pipelines. Trump has emphatically pledged his allegiance to the oil companies and Wall Street banks that stand to profit from the destruction of public health and the environment.”

Anna Galland, executive director of MoveOn.org Civic Action, said “less than four days into Trump’s presidency, it is clear that the next four years will be about catering to corporate interests and big donors instead of putting American families and communities first. Overruling the scientists and experts who have previously warned about the dangers of these pipelines puts big oil profits above all else. This move by the president is dangerous, reckless and heartless.”

During the signing ceremony, Trump said “the regulatory process in this country has become a tangled up mess and very unfair to people.” He also said the expediting of environmental reviews and approvals for high-priority infrastructure projects was necessary because “we intend to fix our country — our bridges, our roadways.

“We can’t be in an environmental process for 15 years if a bridge is going to be falling down or if a highway is crumbling.”

After the ceremony, a reporter asked the president if he had any comment to the Standing Rock Sioux Tribe, but he shook his head no.