In a policy about-face, President Trump extended a moratorium on oil and natural gas development in the eastern Gulf of Mexico (GOM) and expanded the ban to the Atlantic coasts of Florida, Georgia and South Carolina. 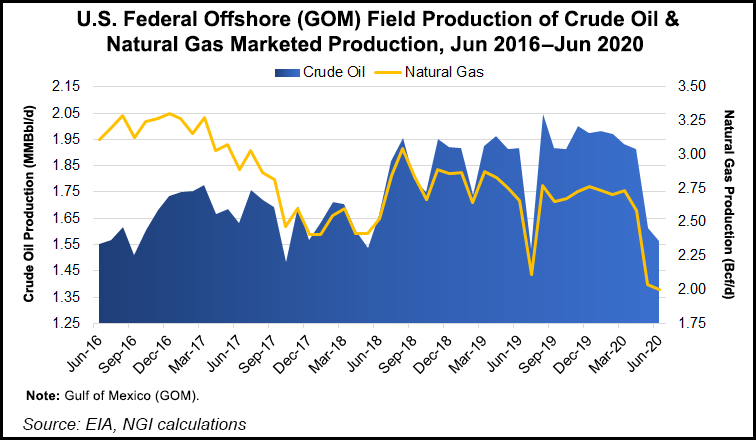 The president, speaking Tuesday in Jupiter, FL, near his Mar-a-Lago Club in Palm Beach, threw a political bone to voters in a battleground state ahead of the Nov. 3 election, analysts said. In doing so, however, he also perplexed an energy industry that had embraced the administration’s prior support for offshore drilling.

Trump has signed an order that continues the GOM moratorium for 10 years beyond its previously scheduled expiration in 2022 and adds the additional territory from 2022 through 2032. Congress first initiated the eastern GOM moratorium in 2006, when Republican George W. Bush was president.

“To my administration,” Trump said, “environmental protection is a sacred obligation.”

Residents and local politicians along the East Coast have generally opposed drilling offshore. In Florida, GOP and Democratic leaders for years have said they were concerned that oil spills or other hazards could devastate beaches that are vital draws for the Sunshine State’s tourism industry. Among others, Republican elected officials from Florida, including Sen. Marco Rubio and Gov. Ron DeSantis, are opposed to offshore drilling near the state.

Democratic presidential nominee Joseph R. Biden Jr. is in a neck-and-neck race with Trump in Florida, according to a new NBC News/Marist poll, with each getting the support of 48% of likely voters surveyed. The swing state is considered key for Trump’s re-election ambitions. In 2016, the president defeated former Secretary of State Hillary Clinton in Florida by a 1.2% margin, according to Federal Election Commission data.

ClearView Energy Partners LLC analysts said Trump’s reversal “further reinforces our conviction that the president has reverted to favoring drivers” of votes “over drillers.” The eastern GOM “may have represented the single biggest target of opportunity for offshore drillers.” Citing federal estimates, the analysts said the territory holds up to 3.63 billion bbl of undiscovered, technically recoverable oil and 91.27 Tcf of natural gas.

Trump has previously — and consistently — touted increased offshore drilling, and his administration has attempted to roll back regulations to ease production of fossil fuels. In 2018, the administration proposed opening most of the Outer Continental Shelf to energy development, including Alaska, California, Florida and Maine. The areas had long been protected by state legislators and previous administrations. Facing strong opposition, the administration backed off the idea ahead of the 2018 midterm elections.

The Trump administration most recently has attempted to lift methane regulations for the oil and gas industry, advance lease sales in the Alaska National Wildlife Refuge, and modified the Clean Water Act to speed up environmental reviews of infrastructure projects. Nearly all of the rules, put in place during the Obama administration, are facing litigation by opponents.

The president also has repeatedly touted his decision to withdraw the United States from the United Nations climate accord, aka the Paris agreement. The international deal to reduce emissions of planet-warming gases also was negotiated by Obama.

Consumer Energy Alliance President David Holt, for instance, called the GOM “a critical asset to meeting growing” U.S. energy needs. “At a time when all 50 states and the federal government are struggling to regain lost revenues as we recover from the Covid-19 pandemic…it is not the time to extend overly restrictive policies that limit U.S. oil, gas and wind opportunities in the Gulf.”

Biden, who said he would ban new leasing on all federal waters and lands, dismissed Trump’s claim to be a champion of the environment.

“Trump has called the climate crisis a hoax,” Biden said Tuesday, referring to a refrain the president has used at political rallies. “He has eliminated rules designed to keep our air and water clean. And, dangerously, he has opened up additional public lands, both on land and offshore, to the possibility of new oil and gas drilling, a deeply unpopular threat to Florida’s natural environment and tourism-based economy.”

Though Trump has since elected advanced policies to help expand drilling and scale back regulations, he said Tuesday he is particularly sympathetic to environmental protection measures in Florida because he made the state his official residence in 2019.

“It’s an order that does so much for the state of Florida,” Trump said. “This protects your beautiful Gulf and your beautiful ocean, and it will for a long time to come.”