A multiyear effort by the Trump administration to promote oil and gas exploration and production (E&P) on federal lands in Alaska continues to advance as his presidency winds to a close. 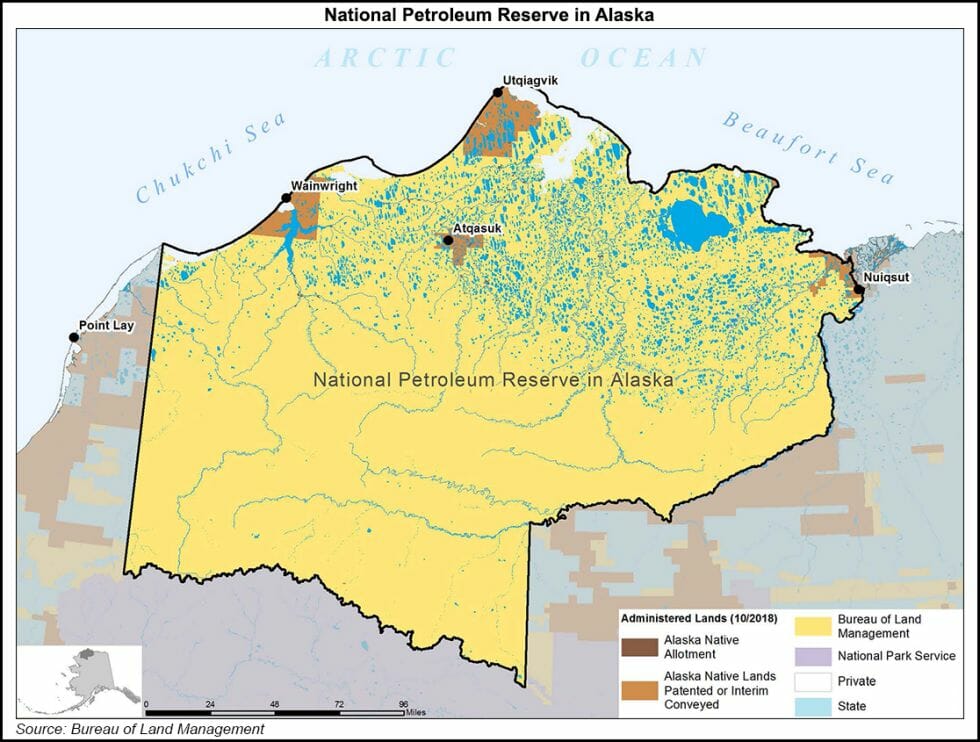 U.S. District Court Judge Sharon Gleason in Alaska ruled Tuesday that an oil and gas lease sale for tracts within the Alaska National Wildlife Refuge (ANWR) could proceed as scheduled on Wednesday (Jan. 6). Environmental and indigenous groups had sought to halt the process, citing an insufficient review process. Results of the sale are scheduled to be published Thursday in the Federal Register.

Meanwhile, the Bureau of Land Management (BLM) has finalized a new Integrated Activity Plan (IAP) to expand leasing in the National Petroleum Reserve in Alaska (NPR-A), the largest swath of federally managed land in the United States.

Despite Alaska’s immense resource potential — the NPR-A contains an estimated 8.7 billion bbl of recoverable oil and 25 Tcf of recoverable natural gas — interest from E&Ps in new development there has been increasingly tepid amid growing social opposition and concerns about the climate crisis.

Major banks such as Barclays plc have even said they will no longer finance any drilling in the Arctic.

The new plan for the NPR-A “includes important safeguards for wildlife and sensitive resources, while allowing for responsible oil and gas leasing across 18.6 million acres of the NPR-A,” BLM said Monday. “These safeguards include no surface occupancy, controlled surface use, timing limitations and provide for new and emerging technologies to access subsurface resources while maintaining important surface values.”

The record of decision (ROD) to adopt the IAP was signed on Dec. 31 by Interior Secretary David Berhardt.

Interior’s Casey Hammond, principal deputy assistant secretary land and minerals management, called the plan “a significant achievement in delivering on our commitment to provide energy for America, from America.”

He added, “With this decision, we are expanding access to our nation’s great energy potential and providing for economic opportunities and job creation for both Alaska Natives and our nation.”

The boundaries of the protected area “were adjusted to account for changing calving distribution of the Teshekpuk Caribou Herd,” BLM said. “Additional stipulations ensure adequate ramps and pullouts on roads are required in future development proposals to facilitate subsistence hunting.

“In addition, important rivers include large set back areas extending miles in some places and additional protections for their free flow and water quality.”

The IAP and environmental impact statement also include measures to address concerns raised from nearby communities.

These concerns include “leasing deferral areas, setbacks along important subsistence rivers, flexibility for potential community infrastructure projects, and special management for split estate lands near communities and Native allotments where no surface occupancy stipulations can be waived by the landowner.”

Opponents of the plan, however, were not buying the environmental safeguards touted by BLM.

Eight environmental groups led by the Alaska Wilderness League jointly condemned the IAP, saying it was signed “following a rushed and incomplete process,” and that, “Multiple lawsuits have already been filed challenging the adequacy of the decision and BLM’s failure to protect sensitive resources and uses in the Reserve.”

The groups said, “The new plan opens seven million additional acres within the Reserve to oil leasing, bringing the available total to 18.6 million or 82% of the Reserve — an area larger than all of West Virginia… The alternative that BLM has adopted was not presented to the public during the process until the final environmental impact statement was published and was never the subject of any public review or comment.

“It endangers the Teshekpuk Lake Special Area, one of the most productive wetland complexes in the world, by opening that entire area to oil and gas leasing.”

The groups said BLM’s plan also endangers wildlife including caribou, molting geese, shorebirds, loons and eiders. “The new plan also completely does away with protections around the Colville River, which provides water and fish to western Arctic communities and was listed just two years ago as among the nation’s most endangered rivers due to the threat of oil and gas extraction.”

“This is more good news for Alaskans as we chart a path to economic recovery and long-term prosperity for our state,” said Murkowski, who chairs the Senate Energy and Natural Resources Committee. “This robust plan recognizes the purposes of the NPR-A and will restore reasonable access to one of the most promising areas on the North Slope, while also taking care to ensure adequate protection of ecologically sensitive areas.”

Sullivan said the IAP “provides a great opportunity to fill the Trans-Alaska Pipeline, keep good-paying jobs for thousands of hard-working Alaskans, and support our energy security… Responsibly developing the vast oil and gas reserves on federal lands in our state will bolster our economic well-being while we also protect and preserve the environment we call home.”

President-elect Joseph R. Biden Jr. has pledged to prohibit the awarding of new drilling permits on federal property, both on land and offshore. Through a separate ROD in October, BLM paved the way for ConocoPhillips’ Willow project in the NPR-A. Production at Willow could reach a plateau of 160,000 b/d.